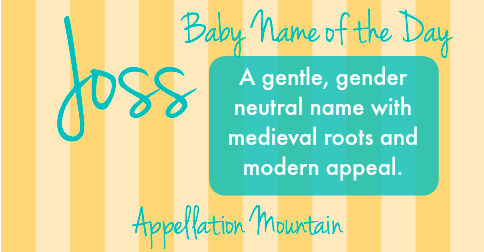 It’s a short name made famous by a celebrated director. But is it better for a boy or a girl? And is this enough name to stand alone?

Thanks to Kathryn for suggesting Joss as our Baby Name of the Day.

But it was originally masculine, yet another name with German roots brought to England by the Normans.

Back in the day, a tribe called the Gauts or the Geats occupied parts of modern Sweden. Ptolemy referred to the Gautoi in the second century; in the 500s, they’re called the Gautigoths. The earliest recorded forms of Jocelyn are Gautselin or Goscelin, from the name of the tribe.

Gaut may come from a word meaning “to pour.” There’s a river known as the Göta älv – River of the Geats – in Gothenburg, on Sweden’s west coast.

It’s found as an element in Nordic Names. The Dictionary of Medieval Names lists related names, like Gautbert, too.

It is also recorded in Latinized forms, like Gaudenlenus and Gozelinus.

So how did we go from medieval men called Gozelinus to twentieth century women called Jocelyn?

Joyce entered the US Top 100 in 1924, and was rising quickly when Jocelyn debuted. Both names have masculine roots in Norman-England. The earliest recorded form of Joyce was Josse.

Evelyn, Marilyn, and Carolyn were Top 100 names in the era. Jocelyn would have seemed like a logical girls’ name, too.

A handful of famous bearers have boosted the name ever so slightly in recent years.

As of 2014, there were 21 newborn boys named Joss and 18 girls in the US. That’s a pretty even split. Joss shares sounds with traditional names for boys – think Ross – as well as girls – think Tess.

Here’s a curious association: another name for incense is joss sticks.

Incense is big in religious ceremonies and rituals. In China and India, the term “joss sticks” evolved from the Portuguese word for god – deos. It was dejos in Javanese, and eventually just joss.

It’s not a negative association, however, and in our age of Bodhi and Nevaeh, a hint of spiritual meaning doesn’t necessarily hurt a name.

Joss is rare as a given name. And yet, if parents are opting for Jake and Kate on the birth certificate, why not just Joss?

It works well as a nickname for Jocelyn, Joseph, Josiah, Josephine, or any name with Jos- sound. It could be an interesting middle name possibility to honor a loved one with any Jos- name, too.

If you’re looking for a short, unusual, gender neutral given name that feels familiar but is rarely bestowed, Joss is one to consider.

Do you like Joss better for a boy or a girl?