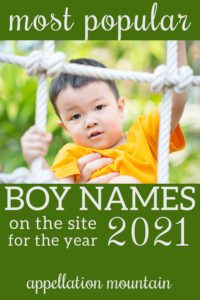 Note the “on Appellation Mountain” part.

These aren’t the top boy names anywhere on Earth, as far as I’m aware. Plenty of these don’t even crack the current Top 1000 in the US.

Instead, they’re based on the most-viewed posts on this quirky little website.

Still, this quirky little website isn’t all that small anymore. And Appellation Mountain readers tend to be comfortably ahead of the curve. That means that sifting through the most popular choices here can reveal potential trends.

And plus, it’s just downright fun.

The Danish form of Severinus, made philosophical by Kierkegaard.

It looks like a modern spin on Zachary, but Zakai appears in the Old Testament.

Fiery, thoughtful Blaise marries a modern energy with plenty of history, too.

The Spanish word for river picks up on two trends: our love of nature names and the popularity of boy names ending with O.

Less familiar than Rowan or even Ronan, but similar to both.

Handsome and principled, Atticus appeals to parents seeking a name with literary overtones and a stylish sound.

A color name, Gray is popular as part of Grayson (and Greyson), but relatively uncommon on its own.

Elegant Lucian offers a long history of use, and a less-popular alternative to Lucas and Luke.

An upbeat Irish charmer, Ronan makes a worthy successor to Ryan and Aidan.

A quiet classic, Wesley feels polished. But Wes is at home on the range.

As preppy as J. Crew, as wild as Motley, Crew is a high-energy name for a son.

This surname name combines preppy style with an edge. Singer Walker Hayes puts it in the spotlight.

Cool, capable Arlo has gone from rarity to rising favorite.

A tough guy name, Deckard is – appropriately – straight out of the never-ending Fast and the Furious franchise.

A nickname name in the key of Max, Gus, and Cal.

A perpetual favorite on the site, Endeavour is the given name of immortal fictional detective, Inspector Morse. A prequel series currently running on ITV is simply titled Endeavour.

A polished surname name that’s become a staple for our sons.

Jack, with an Irish accent.

A classic French name that fits with favorites like Miles.

Short and sweet, but with serious Scrabble points, Zev also benefits from a fierce meaning: wolf.

A nature name with a sharp sound.

At-home in hiking boots or riding a Harley.

Equal parts summery and serious, August has become a favorite.

The Japanese word for ocean, Kai is brief, complete, and nicely culture-spanning.

Like Endeavour, St. John is an oddity that draws people out of curiosity – it’s not really being used for our children. The most intriguing part? It’s pronounced Sinjin. Really.

Scenic, soulful River went from outlandish celebrity name to everybody’s favorite nature-inspired choice for a son. (And, increasingly, for a daughter, too.)

The Welsh form of Ambrose, Emrys is also associated with legendary wizard Merlin. In fact, the name was used in the BBC series Merlin, which ran from 2008 to 2012.

A surname name, an s-ending choice, and an incredibly positive name, too – think wellspring or well-being. No surprise this hopeful nature name is gaining in use.

Vibrant and unexpected, Jones is cousin to two classics. It means “son of John” and shortens to Joe, as in Joseph.

The world’s largest inland body of water is the Caspian Sea. But Prince Caspian appears in the beloved CS Lewis Narnia series, making this a logical choice for a child’s name.

Like Kai, Koa is a Hawaiian nature name – in this case, borrowed from a tree.

An Irish name meaning chief, Torin fits right in with so many two-syllable, n-ending boy names.

A traditional, romantic name, Raphael has long been used across Europe, but relatively rare in the US.

A fast-rising favorite, Huxley nods to a famous British family of authors, scientists, and other accomplished thinkers. But it also just plain sounds cool.

Vintage cool Otto is back in favor, climbing in use just like so many other O-ending boy names.

There you have it! The Top Boy Names 2021 for Appellation Mountain. They’ll be back – or at least, the top sixteen will be – in March 2022. That’s when we hold the biggest tournament of the year. No, not basketball! March Madness Baby Names! Check out the 2021 results here. 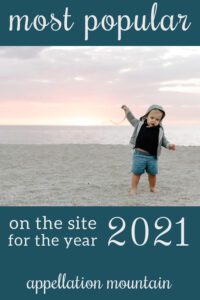