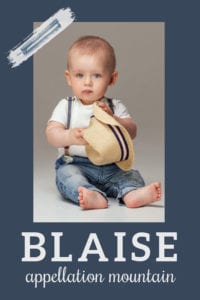 Thanks to Mariuccia for suggesting our Baby Name of the Day.

In Latin, blaesus means to stutter or stammer, to lisp.  From this root came the given name Blasius.

Like many an ancient name, Blaise endures thanks to a saint.

Saint Blaise was born in Sebastia, part of modern day Turkey. He served as bishop, and may have had some medical training.

Legend tells us that he healed the sick – people and animals, be they domestic or wild – and famously saved a boy from choking to death on a fishbone.  Naturally, this makes Blaise the patron saint of throats.

His healing powers made him especially popular during outbreaks of plague, and Blaise is considered one of the Fourteen Holy Helpers to invoke against illness.

The saint’s popularity spread the name throughout Europe. This includes The Gate of Blasius in Basel, Switzerland, and Bristol, England’s Blaise Castle, named for nearby Blaise Hill. And, of course, the baby name Blaise spread across the continent, too.

French poet Robert de Boron included a priest called Blaes or Blaise in his poem Merlin, penned around the year 1200. Others continued the tale.

He’s a mentor to the young Merlin.

It’s not clear if his name relates to the saintly Blaise, or if it has another origin.

Way back in the seventeenth century, we find towering French philosopher and mathematician Blaise Pascal.

Pascal was a whipsmart kid, fascinated by science and math from his earliest days. His first major piece of work – still known as Pascal’s Theorem – was completed when he was just sixteen. Rene Descartes dismissed it as far too sophisticated to be written by one so young.

His final work was Pensées – thoughts – an incomplete document, meant to be the philosopher’s comprehensive defense of Christianity. Despite its unfinished state, it remains widely influential.

The scholar’s reputation lends a brainy edge to the baby name Blaise. And while the name is biggest in the francophone world, it’s broadly familiar elsewhere.

The baby name Blaise peaked in France around the year 1900.

In the US, it’s a slightly different story.

In 1953 and 1962, the baby name Blaise briefly appeared in the Top 1000. But those aren’t outliers. They represent a tiny increase in births, just enough to tip the name very slightly into 900s from the 1000s.

But – mostly – the numbers represent small changes in use. Blaise has danced on the edge of the US Top 1000 for years.

Blaze refers to a flame – and not just a little flicker of heat and light. A blaze is more of a roaring fire. It’s the saintly original, dressed up in a superhero cape.

Fiery Blaze comes from the Old English blaese – a torch or bright flame. It can also mean to lead the way, to blaze a trail, probably a word meaning mark. The trailblazer was the first to travel a path, cutting marks on trees to show the route.

That makes Blaze a modern virtue name of sorts, an active verb name that fits with Dash and Chase.

Interesting, the baby name Blaze has fallen over the last few years. Other epic boy names, like Maverick, Legend, and Ace, are all climbing dramatically.

While pop culture gives us a handful of uses of the name, none seem to be big enough to re-shape the image of the baby name Blaise … or Blaze, for that matter.

There is a minor Harry Potter character named Blaise Zabini – he’s a Slytherin – but, much as we love our Wizarding World names, this seems too obscure to make an impact.

Instead, the baby name Blaise might represent the best of both worlds. It mixes the spiritual and the academic, a modern sound with deep roots.

Parents seeking daring boy names could be every bit as attracted to Blaise as those after something with a modern sound but traditional sensibility.

And the good news? The baby name Blaise remains nicely rare, even as it returns to the Top 1000.

What do you think of the baby name Blaise? Which spelling do you prefer?