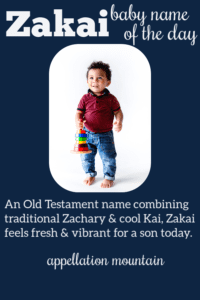 Zakai sounds like a modern mash-up of Zachary and Kai, but this newly discovered boys’ name has more to it.

Will we ever use up all the Old Testament names?

Probably not. Or at least, we haven’t yet. Because Zaccai or Zakkai comes from a Hebrew name meaning pure. There’s a minor Old Testament character by the name. He’s mentioned as the head of a large family returning from exile.

In Latin, the name became Zacchaeus.

It would be easy to wrap this one in with Zachary. Except that name ultimately comes from Zechariah – God remembers.

The Jewish sage Yohanan ben Zakkai lived and taught in the first century, during the era of the Second Temple. His writings are part of the Mishnah, the first major written collection of Jewish oral tradition.

He’s an important figure, one that might inspire some parents. Except Zakai isn’t listed as a boy’s name on Jewish baby name websites. None of the other spellings appear, either.

Visit the Sea of Galilee today, and you can visit his grave, in the town of Tiberias, considered a holy city.

It does often appear as a surname, typically spelled Zakkai. So that might explain some of the name’s uses.

It tipped into the Top 1000 with the latest data set, representing 239 births.

So what pushed the name into wider use?

The surname is one possibility, but I suspect this name’s appeal comes down primarily to sound.

Biblical boy name Zachary peaked in the 1990s, but it remains a Top 100 staple today.

Kai can claim many origins and meanings, but we tend to think of it as a Hawaiian name meaning sea. And it’s a fast rising choice for boys, poised just outside of the current Top 100.

Zakai combines those sounds – the modern classic Zachary with the white hot Kai. And vowel ending names feel fresh and novel today, so that’s another plus. The initial Z gives nearly any name a boost, too.

It might feel a little too new to some families today, but in our age of Elijah and Isaiah, I can imagine Zakai fitting right in.

Do you prefer Zachary or Zakai? Or maybe just Kai? 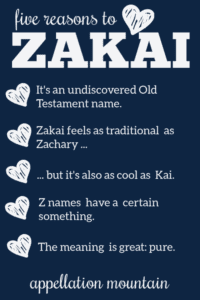