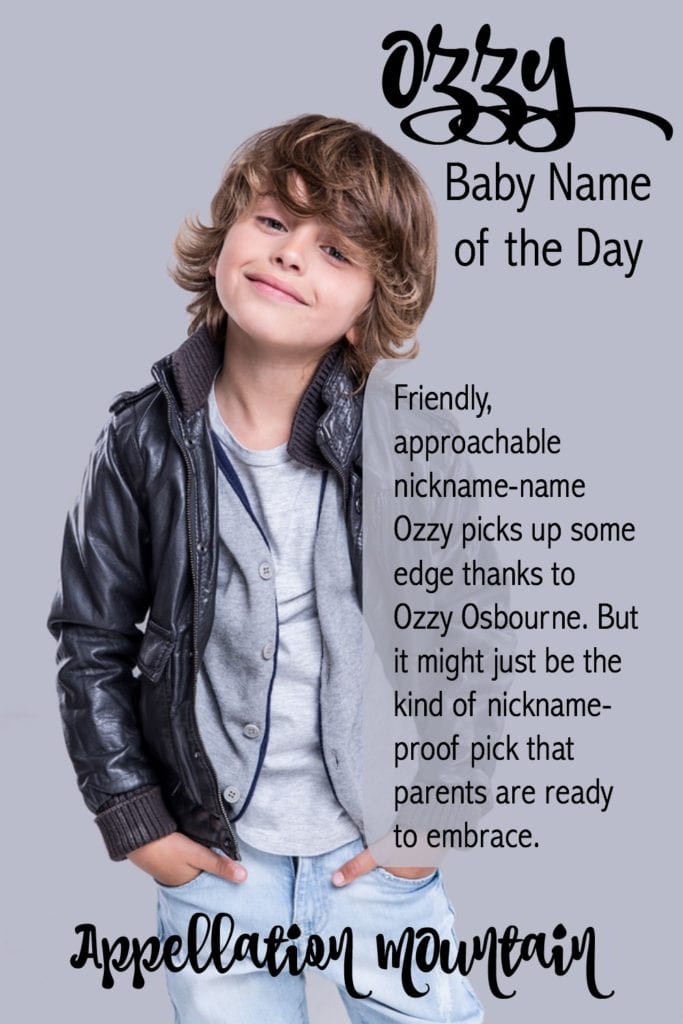 Ozzy is one-part upbeat Americana, two-parts heavy metal. But could it also emerge as a great baby name?

Thanks to Abby for suggesting our Lurker Week Baby Name of the Day.

Almost all of the Os- names have Norse roots, many via Old English. The ‘os’ element comes from ás – god.

DMNES lists Oswald, Osborn, Osbert, Oswin and plenty of others you probably haven’t heard on a baby lately, though many of them remain common as surnames.

The Adventures of Ozzie and Harriet started out on the radio in the 1940s, leapt to television in 1952, and ran right through 1963.

Oswald Nelson started out as a band leader. Harriet, born Peggy Louise, was a singer.

Ozzie was in steady, if sparing use, in the era. But it doesn’t seem directly tied to Nelson.

But then along came John Michael Osbourne. Ozzy was his childhood nickname.

In the early 1970s, he was the voice behind the legendary Black Sabbath. Osbourne launched a solo career in the 1980s, and became a reality star in the 2000s.

Today Osborne is a member of the Rock and Roll Hall of Fame, and, thanks to his reality show, seems more like somebody’s eccentric grandpa than a threat. But that wouldn’t have been the case in the 1970s, thanks to many occult references in the music. In the 1980s, he bit the head off a live bat – legend has it that he thought it was rubber.

Of course, Ozzy could easily be short for any given name or surname starting with Os or Oz. The NHL’s Chris Osgood is one example.

There’s also Oswald, Oswaldo, and Osvaldo, as well as Oscar. You might think of:

Max Greenfield of The New Girl has a son named Ozzie James, a little brother for Lily.

While the name may have gotten an early boost from the heavy metal antics of Osborne, today it seems likely to appeal to parents after something quirky, nickname-proof, and casual. The British are wild for nickname names like Alfie and Jack, and some American parents have also embraced the trend.

Overall, it’s a name that hits a sweet spot for some parents – it’s just edgy enough, thanks to the rock and roll connection and the letter Z. But it remains friendly, even playful, in sound – and it’s even a tiny bit nostalgic and Americana, too, thanks to the Nelson family.

Would you ever consider this name for a son? Do you prefer Ozzy, Ozzie, or one of the longer forms of the name?