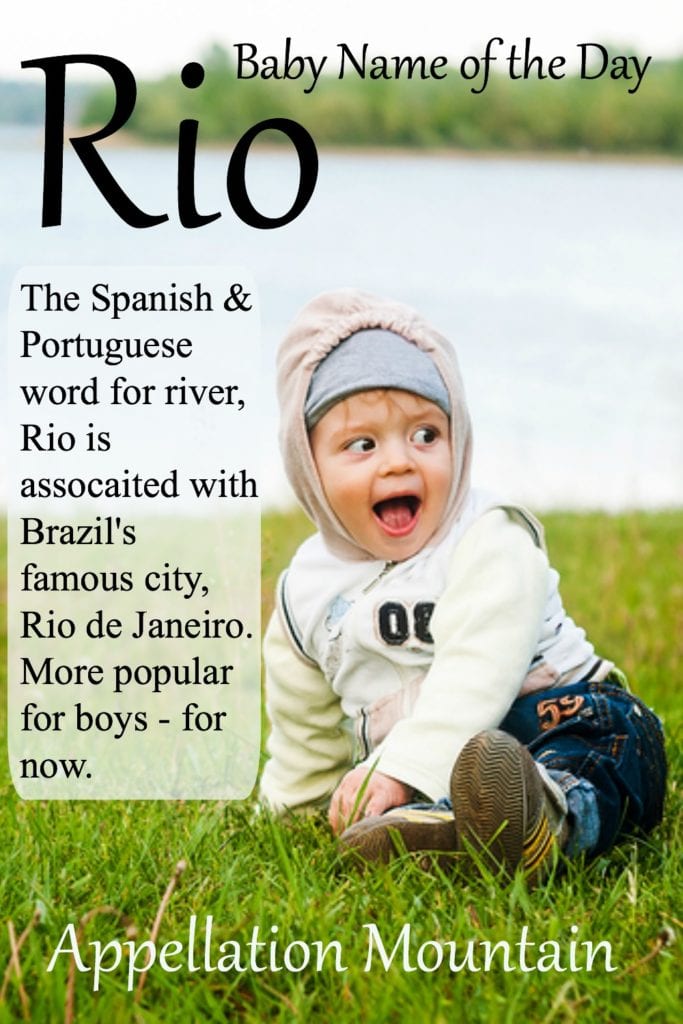 All eyes turned to Brazil for the 2016 Summer Olympics. But will the host city catch on as a baby name?

In honor of the XXXI Olympiad, our Baby Name of the Day is Rio.

In Spanish and Portuguese, Rio simply means river. In Latin, rivus refers to a stream.

River reigns as one of the most stylish nature names for boys in recent years. Lately, more parents of girls are considering River for a daughter, too.

Once a choice on the fringes, River graduated from hippie rarity to mainstream favorite. The tragic death of actor River Phoenix prompted more parents to consider the name.

No surprise, then, that other water-inspired names, like Bay and Ocean are attracting attention. And with Luna in the US Top 1000, we know that the Spanish form of a nature name can wear well.

European explorers first reached the area on January 1, 1502. They chose the name to celebrate the new year. At first, the party called it Ria de Janeiro – the January Sound. They confused the ‘a’ and ‘o’ endings, so the story goes, and it became the January River instead.

When the Portuguese founded the city in 1565, they took its name from the not-river. Eventually, Brazil renamed the not-river Guanabara Bay, from the indigenous Tupi language.

The city, however, remained Rio, and has grown into one of the best known cities in South America, and the largest city where Portuguese is spoken outside of Portugal. It welcomes more tourists than anywhere else in South America – even when the Olympics aren’t taking place.

And, of course, 21st century parents love borrowing place names for their children.

Back in 1982, Duran Duran sang her name is Rio, and she dances on the sand.

The British hitmakers persuaded some parents to choose the name for their daughters. In 1983, it first surfaced in US Social Security data for girls, with 16 newborns by the name.

In Japan, parents prefer the name for daughters. The meaning depends on the kanji used, but white jasmine is a commonly attributed meaning.

So should we give this one to the girls? Not so fast …

But lately, the boys have pulled ahead. In 2015, families welcomed 103 newborn boys and only 38 girls.

No Doubt’s Tom Dumont named his middle son Rio Atticus back in 2008. (Big brother is Ace Joseph, and little brother is Koa Thomas.)

Two animated movies set at least partly in Brazil were titled Rio – while they were about a bird named Blu, the 2011 and 2014 films kept the city’s name in lights.

Even without the movies and the musician’s kid, this name succeeds on sound and style. Consider:

Energetic and upbeat, this name could easily join rising stars like Arlo and Ford in the US Top 1000.

What do you think of Rio? Do you like it better for a boy or a girl?