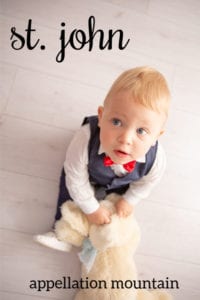 Thanks to Sarah Winter for suggesting our Baby Name of the Day, and Alyssa for requesting an update.

John the Evangelist and John the Baptist both feature prominently in the New Testament. The name traces its roots to the Hebrew Yochanan – God is gracious. It occurs across the world, in an astonishing number of forms and translations, almost certainly thanks to the two prominent saints. And it’s wildly popular, among the most common of given names across centuries, even continents.

So how do we go from saintly name to St. John as a name?

Consult an atlas, and suddenly St. John is everywhere.

Places with the name appear in the UK, US, Canada, and the Caribbean. So do San Juan and plenty of other forms.

Some of the earliest bearers may have been Norman invaders who came to England with William the Conqueror. In that case, they were from places named Saint-Jean in France. There remain plenty of possible Saint-Jeans today.

And so it became a surname, just like Saint Clair or Saint Anne or Saint James, to name just a few, eventually led to surnames.

About 19,000 people in the US today have the surname, many of whom probably have an ancestor who traces his roots to some place on the map named for one of the many saints John.

But it gets even more complicated from here.

This name is not necessarily pronounced like the words Saint John.

The name often signifies that the bearer is very British, indeed, and perhaps a little bit grand, too.

In Four Weddings and a Funeral, the priest butchers the groom’s name in Wedding Two:

There’s also A View to a Kill, the 1985 James Bond adventure. When Bond goes undercover at a high end horse auction, he uses the alias James St. John Smith, correcting the pronunciation in an oh-so-English fashion.

But long before pop culture amused itself with the name, Sinjin was the real deal.

A handful of aristocratic Englishmen use the name or the title, like Anthony St. John, 22nd Baron St. John of Bletso. It’s liberally scattered through this 1985 birth announcements round-up from British Baby Names. And many of us may first encounter it on a Jane Eyre character, St. John Rivers.

Despite all of these associations, historic and pop culture-drenched alike, it has never almost been used as a boys’ name in the US.

Of course, it’s tough to find in the data. Spell it St. John, and the US Social Security Administration will probably record it as simply St. Stjohn is another option, as are all of the phonetic spellings: Sinjin, Sinjun, and Sinjon.

Sinjin peaked in 1992 and 1994, with a record high of 25 births. The other two spellings are virtually unused.

A handful of notables might be familiar. There’s writer, adviser, and explorer St. John Philby, who was involved in negotiations between the US, UK, and Saudi Arabia following the discovery of oil in the region. On a very different note, St. John Smith retired from professional beach volleyball after helping to establish the sport in the Olympics. (Yes, he pronounces his name Sinjin.)

And for years, a horror movie starring Roddy Piper – the retired pro wrestler – has been in the works. It’s titled Sin-Jin, with Piper starring as a prisoner named Sin-Jin Smyth. (The director insists it’s not a nod to the James Bond alias.) But after a 2009 planned release date came and went, it seems unlikely to see a big screen release.

From 2010 to 2013, Victoria Justice starred on Nickelodeon teen sitcom Victorious. We met her Hollywood Arts High School classmate, Sinjin Van Cleef. So that could have introduced the name to a new generation.

Americans tend to use this name as a quirky outlier, and there’s plenty of reason to hear it that way. But it has history aplenty, and a sort of British sensibility that can read as rather handsome. If you’re all about Basil and Albert and Rupert and more names on Tatler’s posh list, I can see St. John working better than any of us might expect. 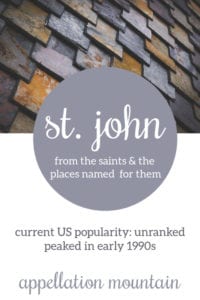