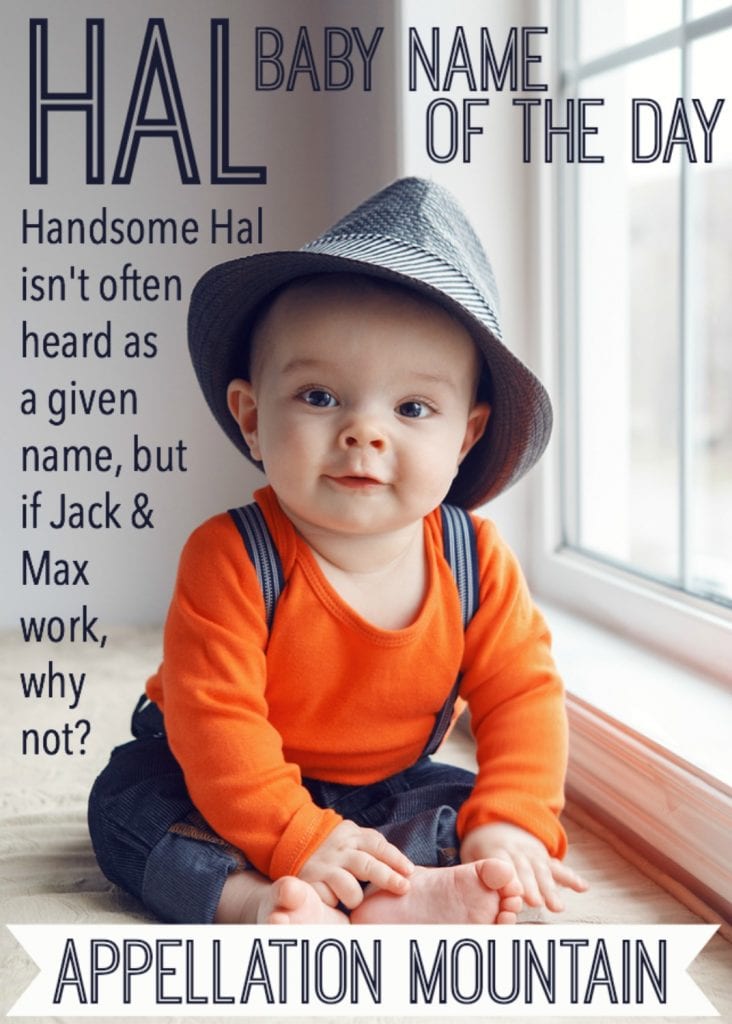 Hal comes in at just three letters, but with famous father Benedict Cumberbatch choosing it for his newest son, will it be the next big thing?

Traditionally, Hal served as a short form of Henry, via Harry. That sounds like a stretch, but remember Henry came to England with the Normans as Henri. The English simplified it to Harry; drop the second syllable, and you’ll find Har, which becomes Hal pretty easily. One other factor: Anglo-Normans also came up with Dick for Richard, Hank for Henry, and Chuck for Charles. They were forever dropping the ‘r’ sound.

It’s also associated with Harold, and works every bit as well as a nickname for that traditional choice, too.

If you know about the whole Henry-nickname status, thank William Shakespeare.

The most famous Henry-called-Hal appears in the history books as King Henry V of England. In Shakespeare’s King Henry IV, Part 1 and Part 2, the prince is referred to by his nickname.

Maybe the Bard resorted to the nickname because there were lots of Henrys in his story, including father as well as son. It’s unclear whether the prince would have used the nickname in real life.

Actor Tom Hiddleston, best known as Loki in The Avengers, played the prince in The Hollow Crown. A series of Shakespeare’s plays adapted for television by the BBC, Crown also co-starred many a famous British actor – including Benedict Cumberbatch.

One of the name’s most famous uses comes from 2001: A Space Odyessey. It’s the name of the computer, short for Heuristically programmed ALgorithmic Computer. Arthur C. Clarke penned the original novel in 1968. The Stanley Kubrick classic movie debuted the same year, a collaboration between Kubrick and Clark.

While the computer steals the show, it’s the bad guy in the piece.

Plenty of other famous figures answer to the names. There’s comedian Sparks. In Malcolm in the Middle, it’s the dad’s first name, too. David Foster Wallace’s Infinite Jest also gives the name to a brilliant, but tragic, character.

One of the most famous superheroes to wear the Green Lantern’s secret identity was Harold “Hal” Jordan.

This superhero angle offers a strong chance for the name’s revival. Another movie starring the character is slated for 2020.

Hal: By the Numbers

But several remain in style limbo. August names are booming, but Gus fails to crack the Top 1000.

The story might be similar here. Classic Henry has surged in use. Even Harold feels ready for revival. And some nicknames are experiencing a renaissance, too – Hank gained over sixty spots on the 2015 charts.

Back in the day, Hal routinely charted in the US Top 1000. The name left the rankings after the 1970s. As of 2015, just 19 boys received the name. You might call it near extinction.

Or maybe you’ll call it a great opportunity for a retro revival.

Besides the new Cumberbatch kiddo, actor Hank – born Henry Albert – Azaria chose the name for his son, way back in 2009.

When high profile parents start to rediscover a name, that can signal other parents to reconsider it, too. Just look at Julia Roberts’ Hazel.

If you’d love to honor a Henry or Harold, but want something breezy and informal, but still rooted in history, Hal could be the name for you.

Would you give this name on its own, or do you like it better as a nickname for Harold and Henry?