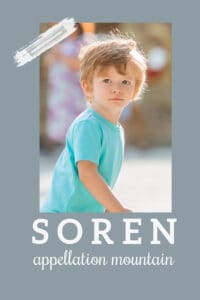 The baby name Soren is a Scandinavian import with a meaning that might surprise.

Thanks to Tracy for suggesting our Baby Name of the Day.

PRONUNCIATION OF THE NAME SOREN

In American English, we spell this name just plain Soren. It sounds something like soaring, without the final g.

Pronunciation varies slightly based on place. You can listen to two versions here and another here. The name is also heard in Norway and Germany and elsewhere in Northern Europe, but remained all-but-unknown in most parts of the English-speaking world for most of the twentieth century.

So what is the meaning of the name Soren?

It comes, believe it or not, from the Latin Severus.

Severus is, of course, the root of the English word severe, and that tracks with the meaning: stern, strict.

A handful of early saints answered to the names. There’s a bishop from Barcelona said to have been martyred under Diocletian in the 300s, and another in Naples a century later. The name continued to be used, at least within the church, for a few centuries more. Plenty of European languages have their own version of the name: Severin, Severino, Severine.

On its way north, the name lost a syllable. It became Sofren and then Soren, with other forms and spellings in between.

The baby name Soren appears in the US in the nineteenth century, but almost always among Scandinavian immigrants.

Inventor Søren Adam Sørensen was born in Denmark in 1879, but immigrated to New Jersey with his parents when he was just two. He’d go on to invent sneezing powder, stink bombs, and the ever-popular snake nut can … but he passed on the whoopee cushion. In America, his legal name became Soren Sorenson Adams, but he was known as Sam.

A towering figure in terms of nineteenth century thought, Kierkegaard is credited with the philosophy of existentialism as we know it today.

But that’s not why the baby name Soren started to catch on.

The first name Soren might have found favor simply because we went wild for two-syllable, ends-with-N boy names in the late twentieth century, continuing into the twenty-first.

A handful of uses introduced the name to an American audience.

Dr. Tolian Soran was a villain in the 1994 film Star Trek Generations. They usually referred to the character as just Soran; Malcolm McDowell played the star-blasting bad guy.

And then came the owls.

Fans of Kathryn Lasky’s series will recognize the first name Soren from a barn owl, the hero of many of the 16 books in the series.

The books inspired a feature film in 2010, titled Legends of the Guardians. Lasky named her owls everything from quirky, elegant human names (Eglantine) to more predictable appellations for fictional owls (Noctus, Twilight).

Soren, of course, fits in that latter category, since it sounds so much like soaring.

The baby name Soren debuted in the US Top 1000 in the year 2003 at #962. That followed many years of quiet, steady gains in use. It’s also the same year The Journey was published – the first book in the Guardians of Ga’hoole series.

Despite that slip, Soren is among the baby boy names attracting considerable attention lately. Maybe it’s the name’s cool, Scandi vibe. Or maybe it’s because we still do love two-syllable, ends-with-N boy names, but we’re looking for something different than Aiden and Mason.

Regardless, the baby name Soren is a traditional choice that hits the sweet spot: centuries of use coupled with interesting figures – from a leading thinker to a heroic, fictional owl. It’s easy to imagine parents seeking cool names embracing Soren as something just slightly different.

What do you think of the baby name Soren? 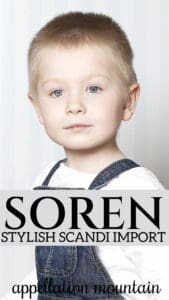 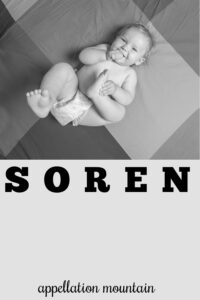