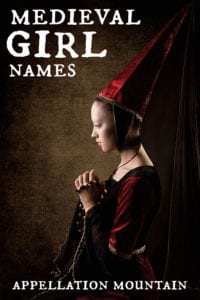 Names change, but also? They stay the same.

Just for fun, let’s imagine that we possess a glorious machine called the Medievalizer. Sounds like a torture device, right? But this machine transforms the most popular choices from our era into medieval girl names.

And if they’re already medieval girl names? Well, it makes them even medieval-er.

It also strives to make them wearable – at least a little – for our time. Amaltrude is legit medieval, but maybe not likely to appeal to parents naming a daughter now.

Of course, this list thrives on a healthy dose of fantasy. Many of these names fit a fictional heroine better than an actual person from the twelfth century. But then, we can’t actually time travel, either.

This name existed in the Middle Ages, but it sounds more like a contemporary choice – or maybe a Colonial one. Instead of Abigail, how about Ambael? It’s the forerunner of Annabelle and Mabel, and it has a great meaning: loving.

Musical word name Aria is a twenty-first century favorite, heard in Pretty Little Liars and Game of Thrones. While it’s a modern innovation, the sound exists in several medieval girl names. Elisaria, a mix of Elizabeth and a German element, and spotted in France, seems promising.

Plenty of Av- names were heard in the Middle Ages, probably derived from the Germanic element avi – desired. As time passed, they became associated with the Latin avis – bird. But that’s a whole other list!

A legendary warrior maiden in Virgil’s Aeneid, Camilla persisted in Italian, as well as other European languages, across the centuries. It’s hard to transform it, besides opting for the double-L spelling. Though for something more obscure that sounds medieval-ish, there’s Quiteria. The name of a fifth century saint, it’s originally associated with the goddess Aphrodite.

You probably know that the Germanic Carl became the French Charles, leading to feminine form Charlotte. It’s also cousin to Caroline. But none of the feminine forms surface in the Middle Ages – at least not in the records available. Instead, Celestina sounds just different enough to suit, and it was heard – at least in Latin – in the right era.

Once again, the Greek Chloe was not unknown in the Middle Ages. But Clotilde – also spelled Clothilde – feels more at home in the age. Maybe that’s because in the earliest days of the Middle Ages, Clotilde was wife to Clovis I, King of the Franks. She converted her husband – and their countrymen – to Christianity, and is considered a saint.

Elizabeth works, of course, but for something with that Great Hall vibe, how about Elisende or Elisenda? The name belonged to a fourteenth queen of Aragon, and she inherited it from her mother. It likely has Visigothic roots.

Several of the El- names mentioned on this list might serve, but Ella appeared in some gorgeous compound medieval girl names. Bellaflor (and Florabel) sound like fanciful blasts from the past.

Emily requires no alteration, but for something less expected, how about Cecily? Latin records typically recorded the name as Cecilia, but Cecily would’ve been the everyday use form during the Middle Ages. It shares Emily’s rhythm, but feels a little surprising.

It doesn’t seem logical that Emma would be found among medieval girl names, but it was wildly popular. From the Germanic element ermen, meaning strong, it appeared in at least a dozen compound names. But authentically medieval picks like Ermentrude don’t feel terribly wearable. Instead, how about Emmelise? It appears on this list – and almost nowhere else. Emmeline and Emmelina would be safer bets, but Emelisse intrigues.

Another avi name, Avelina came from Avila – desired. It was whispered down the alley into Evelyn over the year. Now Evelyn seems like the traditional choice, and Avelina the gussied-up innovation.

Grace names proved popular in the Middle Ages, and they remain so today. But while Grace tops contemporary charts, we’ve almost forgotten some lovely rarities. Gratiana comes from the Latin word gratus. There’s also Gratiosa. Though perhaps Gracia is the most accessible of them all.

Some medieval girl names are reached with minor transformation. But Harper, a surname name boosted by a twentieth century novelist, requires more significant renovation. Hildegard retains the first initial, but it also feels tailored and strong. It might be my favorite transformation on the list.

No question that Isabel and Isabella would’ve been right at home in the Middle Ages. But for something on the throwback side, how about Isabeau? It’s another form of the name, one that’s mostly forgotten now. Fans of A Discovery of Witches might think of Ysabeau, the vampire matriarch of the de Clermont family. Other elegant options from the right age include Isolde, Idonia, and Belsante.

In medieval Italy, any name ending in Ella might be shortened to Lella. It has the same breezy, brief sound of Leah. Of course, Leah also has Biblical status and a long history of use. If that’s a consideration, names like Leticia and Leolina might appeal.

For sound, the lovely Lily probably becomes Lella, too. And Lily almost certainly existed in the Middle Ages – but as a nickname for Elizabeth. (Yup. Lillian came later.) But if it’s the floral vibe that charms, then Florencia might be a better bet. A few botanical names, like Eglantine – sweet brier – also were in use. So was Susanna, which literally means Lily. But Florencia might strike the best balance between being an throwback to the year 1200, as well as a name at home today.

Lu and Lou names abound. Lucida comes directly from the Latin lucidus – clear, shining. Lucina sounds like a diminutive form of Lucia, and maybe it sometimes was. But there’s also a Roman title Lucina, applied to both Juno and Diana. It was associated with childbirth, as well as the moon. That last part takes us full circle to Luna – and makes Lucina a great medieval version of the name.

Matilda might strike you as Australian. Or bring to mind the Roald Dahl character. But long before we waltzed or met the Wormwood family, Matilda of Flanders was the wife of William the Conqueror. They (probably) named one of their daughters Matilda, too. As for Maude, it sounds like a different name, but it’s actually cousin to Matilda, used interchangeably to refer to women by the name throughout the Middle Ages.

MIA and MILA –> IDA and MILLICENT

If a short, compact name appeals, then Ida steps in for modern minis like Mia and Mila. But sound might also suggest Millicent. Another Germanic name with a no-nonsense meaning – work and strong – Millicent is familiar, but rare, in this century.

Olivia comes from Shakespeare, so it’s only fitting that another literary invention substitute. Oriana appeared in the fourteenth century romance Amadis of Gaul. In the tale, Oriana is heir to the British throne. It was sometimes used to refer to Queen Elizabeth I, as in The Triumphs of Oriana, a collection of madrigals celebrating her reign. It means golden.

Maybe some medieval girl names mean red, and could work here every bit as well. But for style and sound, Sybil feels like a perfect alternative. The spelling Sybil has fared better in recent centuries, but it’s so uncommon than either works well.

You might stick with Sophia, but medieval girl names starting with S abound. Sapphira, borrowed from the New Testament, is a favorite. Sabina and Sidonie also replace Sophia/Sofia nicely.

Plenty of V medieval girl names exist, but let’s end with something truly obscure. In Bohemian legend, Valasca was a tougher-than-tough warrior woman, pledged to protect the princess Libussa. (The princess would go on to, among other things, found Prague.) It’s quirky, obscure, strong, and yes, medieval.

The original version of this post relied on the extensive lists at the Medieval Names Archive, Kate Monk’s Onomastikon, and The Middle Ages. The Dictionary of Medieval Names from European Sources proved the biggest resource for the 2020 revision. It’s marvelous, and you should absolutely check it out!

First published on January 20, 2012, this post was revised substantially and re-published on August 1, 2020. 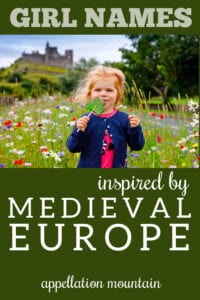