Looking for an uncommon name with an on-trend sound?  You’re in luck!

Out-There Alphabet Week starts with Clothilde as our Baby Name of the Day.

Back in the very early Middle Ages, Clovis was King of the Franks.  He knit together an unruly group of tribes, founded the Merovingian dynasty, and converted to Christianity on Christmas Day, 496.

For his conversion, credit goes to his wife.

A princess of Burgundy, her name is thought to mean “famous in battle” in Frankish. Chrodechildis was the Latin form, and it’s been whispered down the alley into the more approachable Clothilde over the years.

That’s because the queen became a saint for her efforts to convert her regal spouse.  Word is that she was generous, and spent her later years helping the poor and downtrodden.

Clothilde: After the 500s

That was the sixth century, of course, and plenty of names have disappeared over the years.

Clothilde likely survived in large part because the saint was popular.  A fountain in an abbey founded by the queen was said to cure skin ailments.  She’s the patron saint of queens and widows, of those in exile and the lame.

Years later, a French princess was named Marie Adelaide Clotilde Xaviere, and known as Marie Clotilde – note the even sleeker spelling of the name.

Marie Clotilde married the King of Sardinia in 1796. She was known as Clotilda in her new country.

None of the names have ever migrated to the New World in significant numbers:

The name is equally out of favor in France.  There was a singer called Clothilde in the 1960s – though she was born Elisabeth Beauvais, and the stage name was imposed by a heavy-handed manager.

Lastly, the name remains royal thanks to Clotilde, Princess of Venice and Piedmont.  But the princess married into the House of Savoy.  She was born Clotilde Courau, the daughter of Jean-Claude and Catherine, sister to Christiane, Camille, and Capucine. 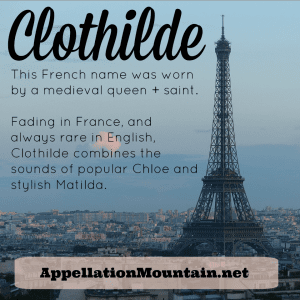 None of this makes Clothilde seem ready for a comeback.

Matilda is hanging out at a fairly obscure #644.  But Matilda seems to be steadily climbing, the kind of name that’s a decade or two away from being everywhere.

Mash the two sounds together, and Clothilde is the logical result.

French names for girls have a long history of use in American English.  Madeleine, Genevieve, Clothilde – the name fits right in.

Nicknames abound, too – Clo and Chloe/Cloe, of course, but also Tillie and Tilda.

We’re just one high profile birth announcement or fictional character away from Clothilde becoming the name everyone was waiting for.