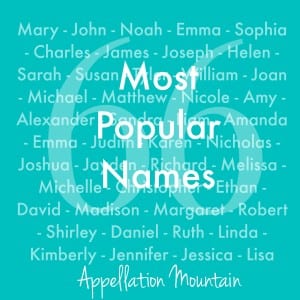 Not too long ago, I took a look at the most popular baby names of all time. Based on the 2012 data, there were just 65 names that had ever ranked in the US Top Five.

Two years have passed, and if you check out the handy Social Security Administration chart showing those few names that have ranked in the US Top Five over the last century, there’s a new entry.

As of 2014, this elite group includes only 42 girls’ names and just 24 boys’ names.  Maybe that’s an indicator that girls’ names have always been more volatile, but the only new entry is on Team Blue.

Because it is only 100 years’ worth of data, there are some names that don’t make the list – most notably Elizabeth, a Top Five name in the nineteenth century, but not the twentieth.

Of course, just because these names have been wildly popular in the past doesn’t mean they’re still common. It would be a delight to meet a baby Betty. Most Amys are mom-aged, and Barbara? Many of them are heading towards grandma status. Mason might feel novel, but that’s only because the name has only been so very popular in the last few years.

Names that I’ve written about have links in blue.

The Most Popular Baby Names of All Time: Girls

Abigail – Call her a one-hit wonder.  Abigail broke into the Top Five just once, in 2005.

Alexis – Dynasty is over, and all of the Alex- names are slipping.  Could Alexis go back to the boys?

Amanda – She was a favorite in the 1980s, but she still feels wearable in 2014, a literary coinage likely to make a comeback … eventually.

Barbara – With a long history of use and international appeal, she’s a classic that our granddaughters and great-granddaughters might embrace.

Betty – I’m still waiting for the Mad Men character to inspire a revival.

Brittany – The famous Ms. Spears is Britney, but she’s made this name – in any spelling – feel more pop star than French place name.

Carol – Feminine forms of Charles like Caroline and Charlotte are white hot, but Carol is still rockin’ bell bottoms on The Brady Bunch.

Deborah – The Biblical heroine is stuck in style limbo.

Debra – Both Deborah and Debra ranked in the Top Five in the 1950s.  Shades of Aidan/Aiden.

Donna – Oh, Donna.  Ritchie Valens crooned this name, and Donna became one of the most popular choices of the 1950s and 60s.

Dorothy – She went somewhere over the rainbow in The Wizard of Oz in 1939, and landed in Miami as one of The Golden Girls by 1985.  Today she seems ready for revival, a three syllable, ends-with-y name that would wear well.

Emily – A Top Ten name since 1991, Emily leans literary – think Dickinson, Bronte – and has a long history of use.

Emma –  Relatively rare when television’s Kate & Allie debuted in 1984 – Emma was Kate’s teenaged daughter – the name entered the US Top Ten in 2002, the same year Ross and Rachel gave the name to their baby on Friends.  Thanks to her classic style and Jane Austen heroine ties, Emma remains a favorite. The name returned to the #1 spot in the US in 2014.

Hannah – An Old Testament name with a homespun feel, Hannah ranked in the Top Ten from 1995 through 2007.

Heather – A 1970s staple, the mother of Harper and the forerunner of many a creative botanical name. 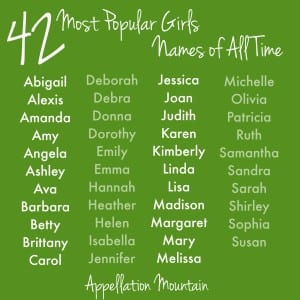 Isabella – In the early days of a revival when Nicole Kidman and Tom Cruise gave the name to their adopted daughter in 1992, Elizabeth’s equally royal cousin skyrocketed to the Top 100, and has been in the Top Ten since 2004.

Jennifer – She was everywhere in the 1970s, the default name for a generation of girls.

Jessica – As Jennifer faded, Jessica became the it-girl J name of the 1980s.

Joan – Another Mad Men name, once worn by the heroic Joan of Arc.  Less popular than Jane today, but still a possibility.

Judith – Jude is big for boys.  Judy is a Jetson.  But Judith is an Old Testament heroine, a classic name still fading from use today.

Karen – This tailored, Scandinavian spin on Katherine was most popular in the 1950s and 60s.  If not for that fact, she’d fit right in with Eden, London, and other tailored names for girls in 2014.

Kimberly – If she hadn’t been so popular in the 1960s and 70s, Kimberly would be a hit today.  Instead, baby girls are answering to Everly and other three-syllable, ends-with-y names.

Linda – Lovely Linda, once the name of a generation – today, firmly in grandmother name territory.

Lisa – Once a pet name for Elizabeth, today Lisa stands on her own.  It was a reasonable choice for 8 year old Lisa Simpson when the character debuted in 1987.  The Simpsons don’t age, but fewer and fewer girls have been named Lisa with every passing year.

Madison – This street name made a Splash when Darryl Hannah’s mermaid-in-New-York decided it was the name for her back in the 1984 hit.  Fast forward to 1997, and Madison made the Top Five, more popular than her predecessor, Allison.

Margaret – She’s a venerable classic, a Top 100 staple from 1880 into the 1980s.  With names like Eleanor and Vivian on the rebound, it’s no surprise that Margaret is making a comeback, too.

Mary – Long the top name and undisputed #1, today she’s fading fast.  And yet, meet a little girl called Mary and it feels both classic and fresh.

Melissa – Pretty Melissa doesn’t quite feel out of place on a baby today, fitting right in with Gabriella and Cecilia, too.

Olivia – A member of the Top Ten since 2001, Olivia still belonged to the Top Five Fraternity as of 2014, inspiring respellings, like Alivia, and the rise of similar names – Olive and Liv, I’m looking at you!

Patricia – Once an absolute staple, Patricia has faded to the edges of the Top 1000.  Nowadays, Trish is the other carpool mom, Tricia is your great aunt, and Patsy is a country legend.  She’s passed the shamrock to other Irish names, from Erin to Maeve, but here’s guessing she’ll be back around the same time Barbara and Deborah reappear.

Ruth – In 2012, I wrote “Ruth seems to be on the verge of a comeback.”  Today the numbers demonstrate that this vintage, Biblical gem is finding more fans.

Samantha – She made a few appearances in the Top Five back in the 1990s, and like Alexandra and other elaborate names from that era, is just starting to wane.

Sandra – Sandra broke into the Top Five just once, in 1947.  Wholesome actress Sandra Dee was popular in the 1950s and 60s – if you’ve ever seen Grease, you’ll recognize the name.  Today you’re far more likely to meet a baby Alexandra – or really, any form of the name other than Sandra.

Sarah – Rarely has this name left the Top 100, and her appearances in the Top Ten have been frequent.  Call her almost as classic as Elizabeth.

Shirley – The Ashley of an earlier generation.  Blame Charlotte Bronte for putting Shirley on the list of possibilities for girls. The famous Miss Shirley Temple helped cement her place as a 1930s baby name favorite.

Sophia – A lovely name with a great meaning – wisdom.  With alternate spelling Sofia also popular, Sofia could be the name that defines the generation of children born in the early twenty-first century.

Susan – I’m a fan of Susan – not Susie or Sue, but the tailored, spare Susan.  With Biblical and botanical ties, Susan would be a hit today, if only the name hadn’t been such a big hit before.

The Most Popular Baby Names of All Time: Boys

Alexander – Alexander appeared in the Top Five just once, in 2009.  This name has an enduring, classic sound.

Andrew – Preppy, polished Andrew had a good run.  As of 2014, Andrew left the Top Twenty after more than three decades.

Charles – The future king of England answers to this name today, but Charles’ Top Five streak was in the 1920s.

Christopher – After years as understudy to Michael, Christopher has also faded into dad name territory.  The entire clutch of names – Christina, Kristen, Christa, even Christian – are slipping out of use, though Christian retains a certain style, thanks to that ‘n’ ending.

Daniel – He of the lion’s den, the heroic Daniel has been a go-to choice for generations.

David – Another enduring classic, though a David born today is more likely to use his full name instead of the once automatic Dave.

Ethan – This name is Colonial cool, thanks to Ethan Allen, but this now-popular pick was obscure until the 1970s.

Jacob – Long the top name in the US – well before anyone had ever heard of Twilight, before Taylor Lautner was even born, the Biblical Jacob remains friendly and accessible.  Jacob gave up the #1 spot to Noah in 2013, but remains widely used.

James – Among the most classic of names, truly trend-resistant, James ranked in the Top Five from 1880 through 1980, and has never left the Top 20.

Jason – Big in the 1970s, Jason grew up, married Jennifer or Jessica, and named his kids Jacob and Ava.

John – Like Mary, John has fallen.  Long the undisputed #1 name, surname form Jackson is now more popular than the original. Though John’s influence is greater than it first appears.

Joseph – Do you know Joe?  Chances are you know three or four, and their ages range from little boy to senior citizen.  Along with James, one of the most enduring choices for boys.

Joshua – A mega-hit from the 1980s into the early 2000s, the Old Testament name has a long history of use, but has been especially popular in recent years. 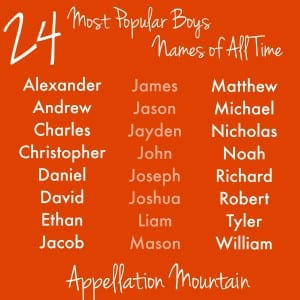 Liam – A newcomer to the list in 2013, Liam takes classic William and gives the name a friendly, Irish appeal.

Mason – The descendant of Jason and Michael, an accessible surname name, and one of the biggest challengers to Jacob for the #1 spot.  Mason debuted in the Top Five in 2011.

Matthew – The names of the twelve apostles are pretty solid go-to choices.  Well, maybe not Bartholomew. But Matthew works marvelously.  This name peaked in the 1980s and 90s but remains wearable today.

Michael – Angelic Michael held the #1 spot from the 1950s into the 1990s.  While the name remains an unassailable classic, it also feels a little more overused than many of the other names on this list.

Nicholas – The alter ego of Santa Claus, Nick darted into the Top Five just once, in 1999.  So while the name is slightly tired and fading quickly, Nicholas remains a perfectly reasonable pick for a son in 2014.

Richard – The saintly, regal Richard deserves the title classic – but these days, a newborn Richard is almost certainly an honor name.  The name has been fading since the 1940s.

Robert – A former #1 name, Robert has fallen out of favor in recent years, but I’m inclined to group him with Matthew – a classic that still feels wearable in 2014.  I wouldn’t call a little boy Bob, but Rob or Robbie seems rather charming.

Tyler – What happens to the formerly trendy?  If you’re Tyler, you crack the Top Five in 1993, and fall to #72 by 2014.  That’s still plenty respectable – and signals that lots of parents are still naming their sons Tyler.  But I’d expect Tyler to be a teenager.

William – The future King of England, once granny and dad make way.  Like James and Joseph, there’s something truly enduring about William.  And like Robert, the preferred nicknames have morphed over the years.  Once upon a time, every William was Billy.  Now, you’d probably expect a little guy with this name to answer to Will.

Which of the most popular baby names of all time is your favorite?  Are there any that you would still use, despite their former (or current) popularity?  Are you more likely to avoid names that were once popular, or do you only consider current use?