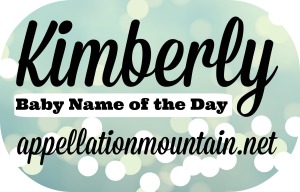 Decades before Madison made a splash, this surname caught on for girls.

Thanks to Virginia for suggesting Kimberly as our Baby Name of the Day.

We all recognize Kennedy and Sloane as surname names, Brooklyn and London as place names.  Isn’t Kimberly just an ordinary name-name?

Back in the 1860s, diamonds were discovered in South Africa, then part of the British Empire.  A boomtown developed around the mines.

Order and governance were needed, but before that could happen, the place had to have a name.

The Secretary of State for the Colonies dismissed the Dutch name as unpronounceable, and New Rush as vulgar.  The name he didn’t reject?

And so Lord Kimberley became the namesake of Kimberley, South Africa, and the Kimberley Diamond Mine.

As a surname, it comes from an Anglo-Saxon given name.  Saint Cyneburga was a seventh century princess who converted to Christianity despite her father’s preference for the old ways.  She later founded an abbey in Northampshire.

Cyn- names were plentiful in Anglo-Saxon, so there are other possible origins, and multiple possible meanings.

The -ly ending is that old familiar field.

So Kimberly is Cyneburga’s field.

Like any surname, you’ll find Kimberly in sparing use over the years.

But to understand Kimberly’s rise, we need to talk about just plain Kim.

Credit two things for the rise of Kim:

So Kim was initially a boy’s name, but Kimberly caught on for girls first.

Maybe parents wanted something slightly more elaborate for a daughter.  Kimberly cracked the girls’ Top 1000 in 1946, five years before it charted for boys.

Then came actress Kim Novak – born Marilyn – who rose to fame in the 1950s.  Novak’s fame helped cement Kimberly as a girls’ choice. 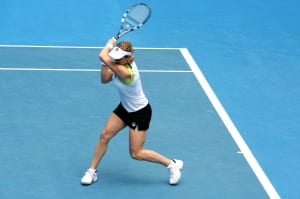 The name has been everywhere since, including:

Kimberly: Ahead of Her Time

With that great three-syllable, ends-in-y sound, Kimberly belongs on the same list as Delaney and Dorothy, Emily and Everly.

And with surname style and ties to the map, Kimberly fits in with lots of currently stylish names.

But in 2014, Kimberly is graduating to mom-name status.  For now.  Something tells me that she’ll be a retro revival ’round about 2139.