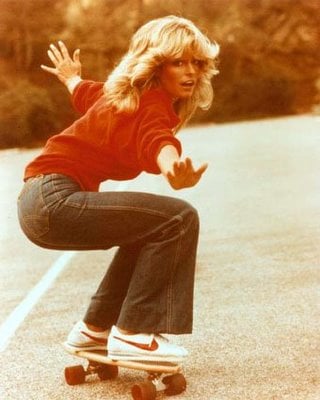 The world changed, and names changed, too.

When I featured the 1960s, I thought of it as reinventing grandma and grandpa names.

But the 1970s?  I was born in the 1970s.  Plenty of today’s expectant parents were, too.  And while we most often borrow our parents’ and grandparents’ names, honoring a sister, brother, or beloved friend is a lovely gesture.

Plus, as children of the early 1990s start families of their own, some of the 1970s names are gently entering granny name territory, too.

And so let’s take a look at some possible updates for the most popular names of the 1970s.

Jennifer – The decade’s heard-everywhere #1 name.  You might reinvent her by using another Jen- name: Jenna was never quite as common.  Genevieve is unrelated, but the shared Gen is a nice link.  Guinevere is the original inspiration for Jennifer.  Any Gwen name could work: Gwendolen, Gwyneth, or just Gwen.  Before Jennifer reigned supreme, Jenny was short for Joanna and Jane, both of which could work in 2013.

Amy – At just three letters, she’s a puzzle to reinvent.  One option is imagining names that could read as elaborations: Amelia, Amabel, Amethyst, Amaryllis, Amity, the medieval Amice.  Another is to take her meaning – beloved – and use a name with a similar meaning, like Esme.

Melissa – The elaborate Melisande could fit in with stylish choices like Vivienne and Evangeline.  Melissa means bee, as does Deborah – but I think Deborah needs a few more decades in hibernation herself.  Still, you could take her meaning – bee – and extend it to Beatrice or Beatrix, or maybe even Phoebe, names with a strong bee sound.

Michelle – Once I might have suggested Micaela, the Italian feminine form of Michael.  I still find Micaela more appealing than the French Michelle, a name now firmly in mom-name territory.  The only trouble?  Thanks to Mckayla, Makayla, and so on, Micaela feels overexposed.   Instead, I wonder if Micah or Elle might be more interesting directions.  Micah is more popular for boys these days, but the original name is used for men and women in the Bible.  Elle is stunning in her simplicity.

Kimberly – One possibility is to drop the -ly.  Kimber fits with Piper and Harper and all those ends-with-r names for girls.  Along the same lines, there’s Kimbra – a distinctive sound.  I also like the idea of taking the -berly and switching around letters to arrive at Beryl.

Lisa – Lisa started out as a diminutive of Elizabeth or Elisabeth.  The obvious reinvention is to use the formal version again.  Or maybe consider Elise, Elisa, Eliza, or another name that is less than four syllables, but still closer to the formal name.  Or use Lisa in a compound name: Annalisa, Mialisa, Caralisa.

Angela – Elaborations like Angelina and Angelique might feel less predictable in 2013.  I’ve also heard Angelisa.  Or maybe branch out and use a name that references angels – Gabriella, Seraphina, Rafaella.  My favorite would be to use a Slavic variant – Aniela, with the nickname Anya.

Heather – She’s tough to update on sound, but there are some great options based on meaning.  Erica is probably as dated as Heather.  But Hadley – a surname meaning field of heather – is as current as it gets.  There’s also Heather’s hue – purple.  That could lead to Violet, Lilac, Lavender, or maybe even Mauve.

Stephanie – She’s a French feminine form of Stephen, and she’s tricky to re-invent.  Stevie has a certain spunky, retro vibe, but also feels very casual.  Foreign imports include Stefania and Stefana, both of which could work well.  But then there’s Etiennette, sometimes heard in French.  And it has me thinking – could Etienne work for a girl?

Nicole – There are lots of Nick names for boys, and girls, too.  Most of the girls’ names feels stuck in the 70s and 80s with Nicole, but Nicola – with her slightly different pronunciation – feels fresh.  There’s also the oh-so-French Colette, which feels quite stylish lately.

Jessica – It’s tough to reinvent Jessica.  She was a fast rising name in the 1970s, and a #1 pick by the 1980s.  For a reinvention, I find myself thinking of Jessamy and Jessamine, medieval variants of the botanical jasmine.

Elizabeth – Whether the year is 2013 or 1973, Elizabeth is a popular possibility.  There’s no real need for reinvention, though you’ll probably use a different nickname than parents would’ve chosen in the 1970s.

Rebecca – Can Rebecca be rebooted?  Does she require an update?  I’m torn.  There’s no obvious refresh for this one, and I think she qualifies as a classic.  Reverting to the Biblical Rivka or her short form, Riva, might be an option.  There’s also the surname name Bexley.

Kelly – Could another shade of green stand in for Kelly?  Emerald is one glittering option.  Fern and Olive are gentler possibilities.  Looking for something completely unexpected, and undeniably lady-like?  Grace, the first name of silver screen royal turned real life princess, Grace Kelly.

Mary – The fall of Mary is one of baby naming’s biggest stories.  We’re so determined to avoid a predictable choice that we’ve given up on this regal, saintly, and storied name.  Updates are plentiful: Mia, Maia, Marianna, Marika, and Mariel are some of my favorites, along with the tailored Maren and Maris.  International variants and smooshes incorporating Mary and plentiful.  There’s also the French Marie, a classic that is surprisingly underused.

Christina, Christine – The masculine Christopher is still going strong, but Chris/Kris names for girls are on the wane.  Christian is now considered masculine, but was once gender neutral, and could be a fresh choice for a daughter.  Cristina is the traditional Spanish spelling, and has some visual appeal.  You could name your daughter Christina but use an unexpected nickname – Kit comes to mind.

Amanda – Like Rebecca, I think she truly needs no updating, even though she’s definitely in mom name territory nowadays.  One choice is to let your daughter answer to Amanda, rather than the Barry Manilow immortalized Mandy.  Another possibility is to look at some of the elaborations suggested for Amy, like Amabel, as well as the French Amandine and maybe even Amadea, a feminine spin on Amadeus.

Julie – Just add an a and perky cheerleader Julie becomes an elegant Roman matron, instead of a cruise director on The Love Boat.  For an even more stylish update, there’s Shakespeare’s Juliet, or maybe the French Juliette or the Italian Giulietta.  Julitta is a foreign form that might be interesting, as is Julissa.

Sarah – Here we go again!  There’s no need to update the lovely, Biblical Sarah.  But there are a few great options.  Sadie and Sally emerged as nickname forms of Sarah.  I’m also attracted to the shimmering Sarai, the original name for Sarah in the Old Testament.

Laura – Yet another classic that wears as well on a child as an adult.  There’s an intriguing twist on Laura to consider: Lorelei.  There’s no connection between the names, besides the shared Laur/Lor sound.  But Lorelei, borrowed from German folklore, has been attracting quite a bit of attention in recent years.  The Gilmore Girls spelled her Lorelai, and you might spot Lauralee or other names that are part-smoosh, part-fraulein.

Shannon – A once-masculine choice borrowed from a river, this Irish appellation had a good run in the 1970s.  Today she’s dated, with most women called Shannon (or Shannan or Shannen) well into their mom years.  So what to do?  Sionann is an Irish river goddess, her name probably taken from the river.  The spelling might put Sionann in the company of heritage choices like Maeve, but the pronunciation is the same as Shannon.  There’s also Sian, a Welsh form of Jane.  It sounds just like Shan, but somehow feels nicely original.

Tammy – Once the height of fashion, today Tammy is out of the US Top 1000 and fading fast.  But oh, the possibilities for re-invention!  There’s Tamar and Tamsin, plus Tamara.  Tamara is the original source of Tammy, but if you don’t shorten her, Tamara is intriguing.

Tracy – Take her back to her ancient place name roots, Thracia.  Or maybe use Teresa, a saintly classic often associated with Tracy.

Karen – She’s originally a Scandinavian short form of Katherine.  The classic Katherine feels like the better choice in 2013, or even Katharine, as in Hepburn .  You might also use another Kar/Car name – Caroline and Carys come to mind.  I’m also fond of Karina, Karena, and Karenna, all names with a tie to Karen.

Dawn – She’s the morning sky, and a hopeful sentiment.  Today, Roman goddess name Aurora – which also means dawn – is the fresher choice.  There’s also Ayelet, a Hebrew name associated with the morning star, and Danica, a Slavic name related to the morning star.

Susan – Susan’s moment is past, but add a syllable, and Susannah could fit right in with Isabella and Savannah.

Andrea – The feminine form of Andrew is another challenge to update.  There’s Drew, the masculine short name popularized for girls by actress Drew Barrymore.  Drea has also been worn independently, and might be the best possibility.

Tina – What to do with Tina?  With apologies to Ms. Fey, it’s just not an option in 2013.  Elaborations like Katarina, Valentina, or Clementina might be possibilities, or even Martina.  Tina Fey’s full name is Elizabeth Stamatina.

Patricia – The enduring Irish name feels dated in 2013, but how about some other names with a nod to Ireland?  Kelly green Clover could work, or any of the many heritage choices, like Maeve, currently in vogue.

What do you think of those most popular names from the 1970s?  Would you use them as is, or reboot them?  Are there other possible reinventions for any of these?