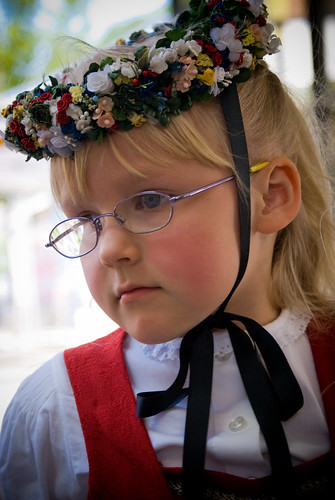 She’s a German compound name all the rage in 21st century America.

Thanks to Jennifer for suggesting Anneliese as our Baby Name of the Day.

Few names are as enduring as Anne and Elizabeth.  But like many a classic with long history of use, both names have generated a nearly bottomless list of variants.  They meet in this name: the classic Anne paired with Liese, a German diminutive for Elizabeth, pronounced more or less like the English Lisa.

Anneliese is the traditional German spelling, and she has a four-syllable pronunciation, typically ann eh LEEZ uh or ann eh LEES uh.   The logical phonetic spelling in English is probably Annalisa, a spelling that exists in other languages, too.

She’s more popular than you might imagine, with virtually every potential spelling on the upswing.  The numbers for 2011 are as follows:

Tally them up and it makes for a Top 200 choice, something that will likely come as a surprise to parents seeking an unusual name.

While she’s a legitimate German heritage choice, you’d be unlikely to meet a little Anneliese in Germany today.  The name – like fellow compound Hannelore – is considered old-fashioned and out of favor.  But American parents are mad for Ann- combos, like Annabelle and Annalee.

Two uses are putting Anneliese in the spotlight today.  First, there’ s young actress Anneliese van der Pol, who rose to fame as Chelsea on the Disney Channel’s original series That’s So Raven.  There’s also Barbie as the Princess and the Pauper, a 2004 direct-to-video Barbie flick.  The world’s most famous doll played a restless royal named Anneliese, who switches places with a penniless servant called Erika.

Throw in a socialite and a handful of athletes, and there’s no shortage of opportunities for parents to hear Anneliese.  And if you hear her, you may very well fall in love.  She’s right at home with elaborate, vowel-intensive choices so in favor today: Isabella, Olivia, Alexandra, Arianna.  It is easy to imagine parents embracing Anneliese as something just a little bit different.

The only question is whether or not that will continue to be true.  Anneliese – in all her variant forms – is stealthily catching on.  For now, she remains an intriguing possibility for parents seeking something elaborate but not ordinary.  The only trouble is which spelling to chose – the dominant Annalise?  The phonetically straightforward Annalisa?  Or the authentic Anneliese?

If you can resolve that debate, then Anneliese might just be the name for you.