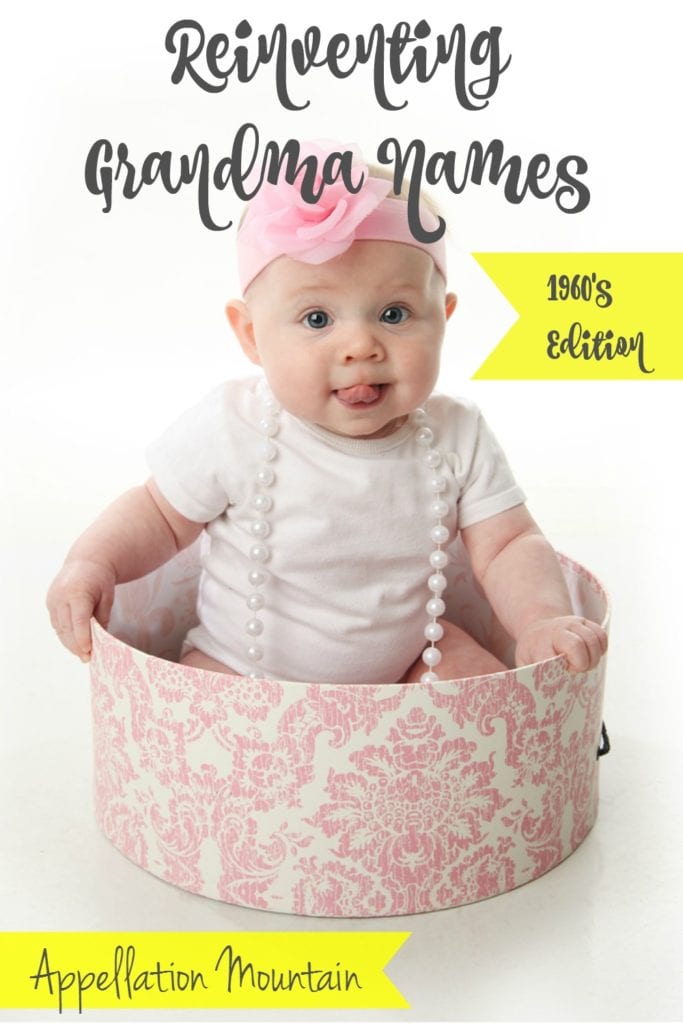 It’s a common conundrum: you’d love to honor your mom, but her name is as dated as avocado appliances.

There are a few options, of course:

But what if nothing works?  Her maiden name is Kowalski, she doesn’t have a middle, and her favorite song is “Crazy Train” or “Blitzkrieg Bop.”

Here’s another route to consider.

Let’s take a look at the most popular names of the 1960s and see if there’s a way to reinvent them, still honoring Grandma, but with a name that feels right for a twenty-first century girl.  A note of warning: not every grandma Cindy will feel honored by a namesake called Thea.

Lisa – She’s a nickname for Elizabeth, so use the long form.  Elisabeth and Elise preserve the -s spelling and make the link more obvious, and Elisa is perhaps the closest of them all.  Is she Lisa Ann?  (There must’ve been rafts of girls named Lisa Ann in the 1960s, right?)  Flip her names and use Anneliese or Annalisa.

Mary – Who doesn’t have a Mary on their family tree?  Forms like Maren and Maris feel modern, while diminutives like Molly and Mae seem sweetly vintage.  Marie puts a French spin on the name.  Pair Mary with a spare, tailored middle like Mary Claire, Mary Blair, or Mary Celeste for a compound name with a current feel.

Susan – Little Susie is all grown up, but Susannah still belongs on the playground with Olivia and Isabella.  After something spunkier?  Nickname form Zuzu could stand alone.  Bonus points if she’s born around the Christmas holidays – Zuzu Bailey is the little girl in It’s a Wonderful Life.

Karen – You can go a few directions with Karen.  The elaboration Karena or Karenna feels at home in 2013.  She’s a Scandinavian form of Katherine, so as with Lisa, you might revert to the original.  The Kar sounds suggests Cara, Caroline, and Carmen, t00.  Another possibility?  Lop off the last syllable to arrive at Ren or Wren.

Kimberly – Would Beryl work?  She’s almost embedded in the last two syllables.  Kimber might also feel fresh in our age of Harper.

Patricia – I’m stumped by Patricia.  I’d name a son Patrick to honor mom, but Patricia feels like the toughest one on this list.  Of course, she’s a quintessentially Irish appellation, so maybe something else from her heritage works.  One possibility, though it might wear better on a son: Patton, a related surname.

Linda – Take the former #1 name in a different direction by adding a n.  Spellings abound, but Linden makes a great nature name for a son or a daughter.  Rosalind takes Linda in a Shakespearean direction.  Or use any name with the element -lin/-lyn.  Adalyn jumbles all of Linda’s sounds and re-arranges them into an early 21st century favorite.

Donna – She’s another tricky one.  The Italian word for lady and the 90210 character that launched Tori Spelling’s career, Donna doesn’t easily lend herself to reinvention.  A few possibilities: the unrelated Donatella, an elaboration of Donata – gift – or Donella, a feminine form of Donald.

Michelle – Once a Top Ten staple, today she’s the First Lady of the United States – and most definitely a mom name.  Drop the mich and you arrive at the spare and stylish Elle.  Or look to the masculine form, Michael, for more inspiration: Michaela, Micaela, Micah, Mika, Mikka, Mila.

Cynthia – Lop off the first syllable and Thea feels surprisingly fresh.  Or delve into her meaning.  She’s associated with the goddess Artemis – Diana in Roman myth.  That links Cynthia to the moon, which suggests a bottomless supply of celestial candidates, like Luna, Io, or Twyla.

Sandra – Poor Sandy has been tainted with tragedy, but she’s originally descended from the regal Alexandra.  The Italian Alessandra is a less expected form.  Willing to really stretch?  Sasha is a masculine nickname for the Russian form of Alexander, and could be a spunky – and related – update on Sandra.

Tammy – Now here’s a name begging for reinvention!  There’s the Hebrew Tamar, or the contracted Tamsin.  Originally heard in Cornwall – the birthplace of Jennifer – Tamsin is a contracted form of Thomasina.  Some of those original Tammys may have been named Tamara, the Russian form of Tamar.  If you resist the urge to shorten this one, Tamara is potentially still very wearable.

Pamela – Lop off the first syllable and Mila or Milla could be very wearable.  Another direction?  Sir Philip Sidney invented the name for a poem titled Arcadia – it is a very subtle connection, but if yours is a literary clan, it might appeal.

Lori – Reboot Lori with one of her more traditional forms: Laura, Lauren, or even Laurence or Laurentia.  The frilly retro Loretta was used by Sarah Jessica Parker, and the French place name Lorraine is another seldom heard possibility.

Elizabeth – You’re in luck!  Not only does Elizabeth work as well in 2013 as she did in 1963, but choosing a different nickname allows grandma and granddaughter to share a name without confusion.  Prefer something less expected than Elizabeth?  Foreign forms like Elspeth or Elizabella could appeal.

Julie – Julie still sounds like the cruise director on The Love Boat, but Julia is an enduring classic, and Juliet, Juliette, Julietta, and Juliana are lovely options.

Brenda – Drop the d sound and there’s the lovely Brenna.  The brisk Brynn and Bree might work, too.

Jennifer – Was your mom called Jennifer when the name was still on the uptick?  There’s always Jenna, but she had a good run in the 1970s and 80s, too. Genevieve is a français favorite for parents today.  Jennifer traces her roots back to Guinevere, or Jenny was originally a nickname for Johanna and Jane.

Barbara – What to do with Barbara?  She’s a lovely, saintly classic bound to make a comeback – just not yet.  Babs and Barbie don’t seem any fresher.  The Slavic Varvara is an exotic option.  Nickname forms Babette, Basia, and even Bobbie all have some potential.  I also stumbled on Varenka in this book, but I can’t confirm it was regularly used.

Angela – She’s Andela and Aniela in Slavic languages, both of which make for surprising variations, though I’m taking some liberties with pronunciation.  Angelina has a Rugrats/Hollywood glitter to it, and Lina is a short form of the elaboration.  Or use Gabriella, from the angel Gabriel, or Seraphina, as in the order of angels known as seraphim.

Sharon – I’d be astonished to meet a newborn baby Sharon, but you might go with Rose – as in the flowering shrub, the rose of sharon.  The unrelated Seren shares some of the sounds.

Theresa – She’s easily updated with the nickname Tess or Tessa, and you might even embrace the Cornish Tressa.

What do you think of these reinventions?  Do they go too far?  Is your mom’s name something that you might pass on to a daughter, or would you tweak it?