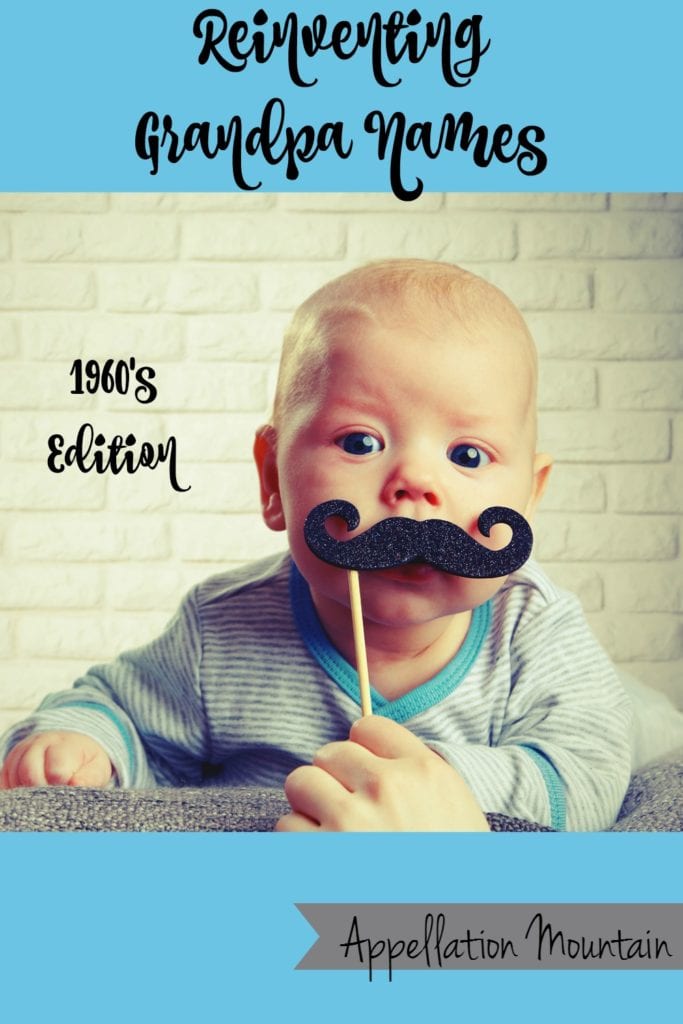 Earlier this year, I wrote a post about rebooting 1960s names for girls.  This week – at last! – we turn our attention to the boys’ list.

Why did it take me so long?

Add it up, and there’s less interest in rebooting masculine names.

But now there’s less pressure than ever to pass on family names.  If anything, parents probably fret that their child’s name will be too plain.

So let’s say that you want to honor your dad, or your partner’s dad, or maybe a favorite uncle.  But he was born in 1960s, and today his name feels a little bit ordinary.  Can his name be reinvented?  Here are some possibilities.

Michael – How can you not like Mike?  He’s friendly, enduring, worn by all sorts of accomplished figures, from saints to hoop stars.  There are two easy updates available.  Micaiah shares the same roots as Michael, and has the same feel as elaborate Old Testament appellations like Hezekiah and Zachariah.  Micah is a short form of Micaiah.  Micah is catching on – he’s currently just outside the US Top 100.  But depending on how you define unusual, he can be just different enough to honor a Michael and appeal to parents in 2013.

David – David shares the bright, bold ay sound of Aiden and company, plus he’s got that vibrant v.  Then again, so does Davis, a surname form with an even more current sound.

John – Long the #1 name for a boy in the US, John continues to fade from use.  Happily, he’s also easily updated.  There’s Jack, Jackson, and Jaxon.  Jonathan splits the difference between fading John and trendy Jaxon.  International variations are limitless.  There’s Ivo, Ivan, Sean, Shane, Gianni, Giovanni, Ian, Evan and many, many more.

James – One of the few names to never leave the Boys’ Top 20, James continues to be a favorite for boys.  But like John, there are oodles of possible updates.  Surname form Jameson or Jamison is one possibility.  So are imports like Seamus and Giacomo.

Robert – While he’s a classic, nickname Bob feels dated on a baby boy in 2013.  You could still use Robert and go nickname-free, or choose the less common Rob or Robbie as a short form instead.  If you’d rather change it up, there’s Robin – gone girl, but being revived for boys once more.  Rupert comes from the same roots, if you’re going for a quirky English vibe.  Then there are the surnames Hobson and Hopkins, derived from Hob and Hop, medieval nicknames for Robert.  There’s also Robinson or even Robertson.

William – The obvious way to spice up William is to use stylish short form Liam instead of the full name.  The only problem?  Liam is incredibly popular, and you won’t be the first to think of honoring a William with a baby Liam.  Other possibilities?  Surnames Willis, Wilson, and the imported form Willem.  That last one is a favorite of mine.

Richard – I love the idea of Hardy from Richard.  There’s also Dixon, in the key of the popular Jaxon and boosted by 90210.

Thomas – Thomas is one of those names in style limbo.  Despite his classic status, he’s slightly out of favor in 2013.  You might use just Tom, a choice that fits with Max and Gus.  Or maybe Thompson, Thomson, or Thomason.  There’s also Tomas and my favorite, the Scottish Tavish.

Jeffrey – He’s the toughest of the Top Ten to reboot!  One possibility is Godfrey, though strictly speaking he’s a separate name that’s become tangled up with Jeffrey over the years.  Or possibly Jefferson.  The -frey in Jeffrey means peace, so other options might be Pax, Paxton, Pace, Casimir, or Miro.

Steven and Stephen – Now that Steve is squarely in dad name territory, is it time to take a fresh look at Stefan?  Other imports that could stand-in for the original include Esteban and Estevan, along with Etienne.  I’m partial to Stefan, though, and think he picks up the same vibe as mega-popular Sebastian.  Another option?  The original Saint Stephen’s life could provide some inspiration: Deacon, or maybe Wren.  The bird is associated with St. Stephen in Ireland, though Wren is now more of a girls’ name.

Joseph – There are tons of Jo- names: Jody, Jordan, Joaquin, Joel.  But none of them are related to Joseph.  Foreign imports are less wearable in English, though I love the Dutch Joop, the Polish Jozef, and the Spanish Jose.  One possibility?  Name your son Joseph, but take a page from Joss Whedon, and use Joss as a nickname.

Timothy – Yet another tough one to reinvent!  Like Joseph, Timothy’s translations don’t offer much opportunity.  And Tim makes me think of timid and Tiny Tim.  Hmmm … would Ty work?  It’s a stretch, but a tempting one.

Kevin – Maybe the best approach with Kevin is to change the first letter.  Drop the K entirely, and you’ll have Evan.  Or consider Devin or even Devon.

Scott – I love the idea of replacing Scott with the similar-sounding Scout.  Scott refers to someone originally from Scotland, so the place name could be a contender, a la the Kardashians.

Charles – If some names are difficult to reboot, others don’t seem to need it much.  Charles is arguably more stylish now than he was in the 1960s, and the nickname Charlie is quite current.  But possibilities abound: Carlo, Arlo, Charleston.  Carrie mentioned Huck as an option, too.  I didn’t get it at first, but if Charles can answer to Chuck, why not Huck?

Paul – I love the imported versions of Paul, especially Pablo and Pavel.

Daniel –  I’m tempted to suggest names that contain dan, even if they’re not related to Daniel.  The list is long: Jordan, Brendan, and Aidan, Dante and Dane.

Christopher – The easiest update is Christian, which also leads to Carsten.  Kit and Topher might appeal, too.

Kenneth – There’s something about Kenneth that still appeals, even though he’d undeniably seen better days.  Like Daniel, it is easy to find names that share the -ken sound: Kenelm, Kendrick, Brecken, and Kendall.

Anthony – Here’s another one that doesn’t need much updating – Anthony is handsome as is.  Foreign versions Anton and Antonio do have some appeal.

Gregory – Drop the y and Gregory becomes Gregor, a name that could fit right in with Connor and Archer.  There’s also the possibility of contracting Gregory to get Grey – and all of the Grey names are quite stylish: Greyson, Greydon, Greyer.

Ronald – Ron- names like Ronan and Ronin could work.  There are also older forms Reynold and Reginald.

Donald – Like Ronald’s Ron, the Don in Donald offers up a bunch of possibilities: Donovan, Donnelly, or maybe even Landon and Brandon.

Gary – He’s quite dated, but he’s among the easiest to update.  There’s surname form Garrison and then Gar- names like Garrett and Gareth.

Eric – Eric truly needs no reboot, though you might consider the classic Frederic, as well as Derek, though Derek is in dad name territory himself.  As the daughter of an Eric myself, I’m fond of a round-about honor name: Leif, as in Leif Erickson.

Can you add to this list?  I feel like the boys’ were much more challenging than the girls’ reboots!