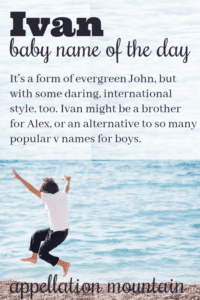 Ivan shares roots with John, making it an evergreen classic with a Slavic twist.

Thanks to Lola for suggesting our Baby Name of the Day – and to Tanya for requesting an update!

Before you dismiss this name as a rarity, check out the data. As of 2017, Ivan ranked #135 for boys born in the US. That’s not a fluke; it’s hovered in the US Top 150 for all of the twenty-first century.

That’s far less common than John, Jack, or some of the other forms of the name. But it’s far from obscure.

In fact, this name is about as common as Declan, Bennett, Kai, or Kingston. It feels a little more common than you might imagine, but still not something you’ll hear every day.

Monarchs of Bulgaria and Russia answered to the name. Two of the latter stand out: the Great and the Terrible.

The Great came along in the 1400s, and is credited with forming the basis of modern Russian. He tripled the territory under his control and broke two centuries of paying tribute to the Mongols. Over his four decade-long reign, he also renovated the Kremlin. Following his death, a bell tower was erected in his memory, and for many years, it was the city’s tallest landmark.

As for the Terrible, he came along almost a century later. Here’s an important distinction: the Russian word connotes power and achievement, rather than barbarism or incompetence. Terrible isn’t necessarily a bad thing, at least in Russia. Ivan the Formidable might be a better translation.

After all, the sixteenth century Tsar reformed the legal code and took steps towards introducing representative assemblies and a measure of self-determination for peasants in rural Russia. He opened up new trading partnerships, though ultimately international affairs would be his undoing. The ruler spent the latter half of his tenure at war, costing Russia a fortune. Ivan also quarreled with his son and heir, and fatally wounded him during an argument.

So maybe “terrible” isn’t so misplaced after all.

Other notables by the name include:

It’s often been the name of fictional villains, like Rocky’s opponent in Rocky IV, the Soviet powerhouse Ivan Drago.

It’s pronounced with a long I sound – EYE vun – in American English – most of the time. But it’s ee VAHN in other languages, and some – like tennis legend Lendl – favor the long E version.

Notably, it’s a long E sound in Spanish, too. It sounds a little more like ee van, which could be confused for Evan – another name connected to John.

Interestingly, Ivan has had a good run in Spanish-speaking countries, reinforcing the name’s potential for international appeal.

Ivan: The One and Only

The children’s book The One and Only Ivan is a true story about a gorilla at Zoo Atlanta. I think this puts the name in the same category as Alex – strong and distinctive, but perfectly appropriate for a child, too.

It’s a name that might feel just daring enough – familiar, easily spelled and pronounced, but a little more unexpected that Jackson or John. And there’s something cosmopolitan, even dashing about this name. It should wear well on a child today, whether he’s accomplishing great things – or throwing an epic temper tantrum.

Do you know any kids called Ivan? Would you consider it mainstream, or a little more out-there?

Originally published on December 2, 2008, this post was revised substantially and re-posted on October 30, 2018.