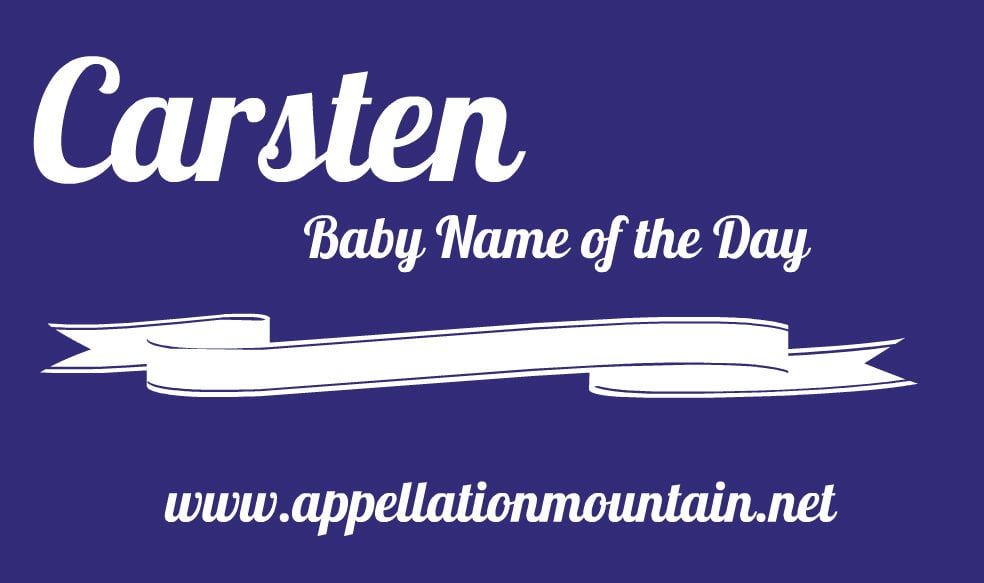 Carter, Carson, and Christian are solidly established in the US Top 100.  Why not this name?

Thanks to Katherine for suggesting Carsten as our Baby Name of the Day.

It comes from Christianus – literally, a Christian, in medieval Latin.  We know the name as Christian, and it was once used as a gender neutral name.  I can’t tell how it was perceived – was it the twelfth century equivalent of Nevaeh?  Or was it as ordinary as Christopher is today?

Christian become Carsten via Middle Low German, the language spoken around the North Sea and Baltic Sea in the twelfth to sixteenth centuries.  Remember the Hanseatic League?  They were  a merchant guild, a cooperative formed to facilitate trading across vast distances.  Lübeck was a major port, the Hanseatic League’s boomtown.  From the port city, the merchants traded with Scandinavia, Russia, England, Belgium, and others.  It’s the kind of linguistic connection that can make for interesting names.

Christian became Carsten and Karsten more than 500 years ago.

He arrived in Scandinavia a few years later, and Carsten was big in Denmark.  The first Danish king to wear the name was born back in 1426.  The first Carsten was founder of the University of Copenhagen.  Nine Danish monarchs have worn some form of the name since, and there’s a Christian in the current succession.  Today the royals are usually referred to as Christian, but Carsten remains in heavy use among Danes.

He appears as a surname, too.  I stumbled across a Swedish opera singer named Christoffer Christian Karsten.  He was a big deal in the late 1700s/early 1800s.

And while most notable bearers are German or Danish, the name is worn in the Netherlands, throughout Scandinavia, and in the English-speaking world, too.

Besides all this history, there’s also Carsten’s sound.  With Carter ranked #41 and Carson at #85, Carsten fits right in.

Overall, Carsten is a great compromise name for parents stuck between modern inventions and traditional choices.  He’s a nickname-free possibility that is a little bit unexpected, but completely wearable.  And he might even be a way to honor a Christopher or Christina, Caroline or Carl on your family tree.