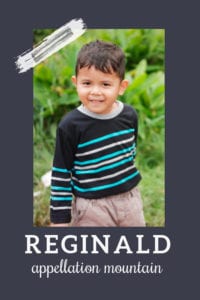 The baby name Reginald could fit right in with Sebastian and Benjamin, and Reggie? It’s in the same category as fast-rising favorite Archie. But despite these similarities, it remains an overlooked traditional.

Thanks to Nicole for suggesting the name originally, and to Sarah for requesting the update.

A daring knight of old puts the baby name Reginald on the map.

Also called Raynald, Reynaud, Renaud, Reynold and Renald, Reginald of Chastillon lived in the twelfth century. He journeyed to the Holy Land as part of the Second Crusade. But that’s not all. He briefly ruled as Prince of Antioch, and later as Lord of Oultrejordain.

Both of his titles were held through marriage – the first to Constance of Antioch, the second to Etienette of Milly.

By all accounts, Reginald was quite the adventurer at best, and possibly a reckless and sometimes cruel ruler at worst. He spent seventeen years in a Turkish prison, so you know someone wasn’t a fan.

Regardless of that Reginald’s legacy, the name was used regularly throughout the Middles Ages in various forms.

It’s Germanic in origin, from elements meaning advice – ragin – and rule or authority – wald. The Normans brought it to England. Norse versions of the name, like Rognavaldr were already in use, at least in small numbers.

There’s a tenth century Saint Reinold in Germany, Latinized as Reginaldus. (It’s said he was a direct descendant of Charlemagne.) Other famous figures used the name Reginald throughout the Middle Ages, in France, Germany, and England, and beyond.

It sometimes gets mixed up with Rex – the Latin for king. After all, it tracks with the name’s meaning. And Regina is the Latin for queen. Oscar-winning actor Rex Harrison was actually born a Reginald.

Default nickname Reggie briefly caught on as an independent name, ranking in the Top 1000 from the 1930s into the early 1990s. But it never quite took hold – it barely cracked the Top 500.

In the 1950s and 60s, twin brothers Reginald and Ronald Kray hobnobbed with Sinatra in their London nightclubs. Behind the scenes, they were criminal masterminds who eventually ended their days in prison. That knowledge might seem a little obscure, but Reggie and Ronnie appear in pop culture over the years. They feature in documentaries, but also fictional versions and references galore.

Many of the most famous bearers might be better known for ditching the name – or just not using it.

Despite this eclectic set of uses, Reginald long had a fairly consistent image: privileged and slightly English. Maybe a little posh. In the Richie Rich comics, Reginald is Richie’s mean-spirited cousin, spoiled and sometimes cruel.

Others born with the baby name Reginald tend to be Reggie most of the time.

All of this makes Reggie feel sporty and high-energy.

But the most familiar Reggie these days comes from a comic book character.

Along the way, Archie picked up some constant companions – Betty, Veronica, and Jughead. Even if you’ve never seen an issue, those four names might feel vaguely familiar.

There’s also Reggie Mantle – full name Reginald. He’s competition for Archie, but he also plays bass in the band the friends form. In the early comics, the character was meant to be affluent and well-connected, which might explain the name. Or maybe not. In the 1940s, Reginald would’ve been fairly standard.

Interestingly, the character might explain the name’s peak use year. We all met Reggie Mantle back in 1942, as the Archie comic was launched.

But the baby name Reginald peaked in 1968 – the same year The Archies, featuring Reggie Mantle on bass, became an animated Saturday morning hit. After all, the fictional band scored a real-life hit in 1969 with “Sugar, Sugar,” so it feels like people were paying attention.

Charles Melton plays the role on Riverdale, an edgier update to the classic series, airing on The CW since 2017.

And while we’re on the small screen, you might think of breakout Bridgerton star Regé-Jean Page.

At #882, the baby name Reginald teeters on the edge of obscurity. It’s downright rare for a child born in the twenty-first century.

And yet, Reggie is enjoying a renaissance in the UK, ranking in the Top 100 over the last few years.

If American parents embrace Sebastian and Archie, is Reginald-called-Reggie really so out there? Gone are the days when parents preferred the very safest of boy names, sticking to William-called-Billy or Ryan and David.

The baby name Reginald strikes a balance between overlooked rarities and traditional choices, and nickname Reggie feels like a high-energy throwback that could be very at home today. It’s a brother for Theodore-called-Theo, or an alternative for Oliver.

What do you think of the baby name Reginald?

First published on September 21, 2009, this post was revised substantially and re-published on April 6, 2021. 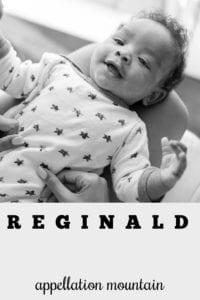