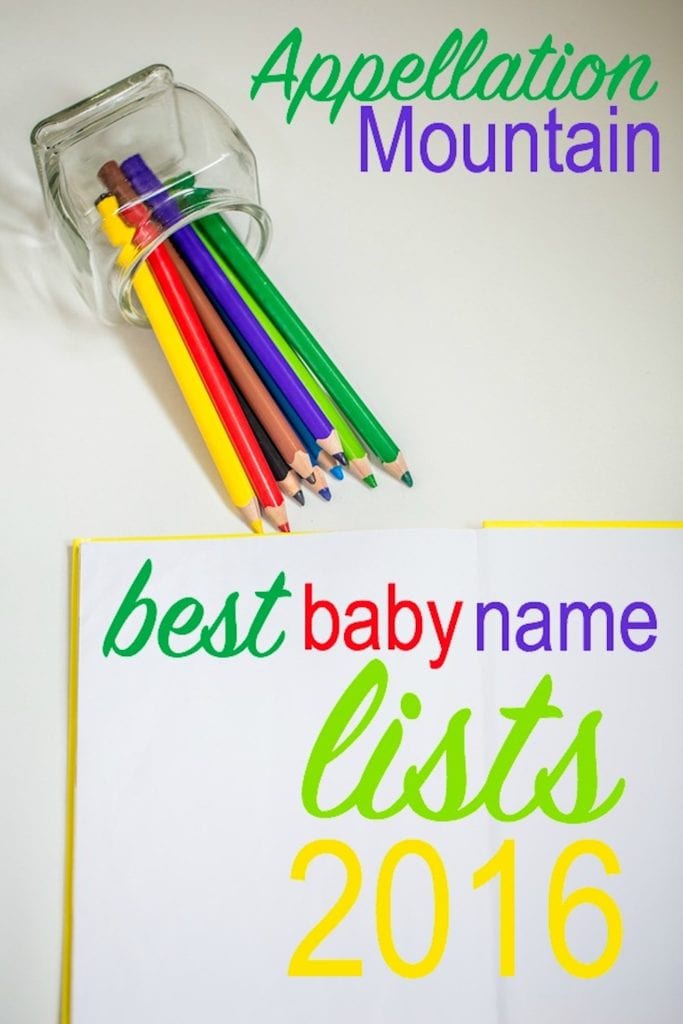 What were the best baby name lists 2016?

The posts that perform best at Appellation Mountain tend to be lists. Sure, some Baby Names of the Day are wildly popular – you can read the list of top boy name posts and top girl name posts for the year. But they tend to lag far behind the lists.

And so here’s a list of lists, the 25 most viewed baby name lists 2016 at Appellation Mountain. Enjoy!

Chase and Sway: Action Verb Names for Boys – This post debuted way back in 2013, but Pinterest helps keep it alive. Plus, action verb names for boys are totally a thing.

Helen, Ruth, Rose, and Esther: 1930s Names Ready for Revival – We’re always look for the next wave of comeback names, and it could be the 1930s chance.

Campbell and Collins: The New Unisex Names for Girls – I love looking at surname names not commonly used for boys, especially ones that could easily work well for girls. The outcome? This list!

Nico, Nicholas, and Nicosia: Nick Names – I’ve always like Nicholas, as well as the many other names that call themselves cousins.

Prosper, Sage, Merit: Virtue Names for Boys – Another list along the lines of Haven, Noble & True.We sure do love those virtue names!

What to Name a Fairytale Prince – I wrote this as a companion piece to What to Name a Fairytale Princess. The prince version is far more popular! (But see how I snuck the Princess link in there anyhow?) Back in 2008 and the first few years of blogging, the girl version of a post always outperformed the boy one. Now, parents continue to think more boldly about naming boys, and boy posts sometimes outperform their sisters.

Lily Names: Lilith, Liliosa and Liliane – Lily ranks in the US Top 25, the most popular of the Lily names. But options abound, from the equally traditional Lillian to rarities like Liliosa.

Fresh Three Syllable Names for Girls – One of my personal favorites! Maybe because I used Romilly and Dorothy in the same post. Or possibly because I’m jealous – still! – that my sister got to be named Kimberly.

Ten Swan-Inspired Baby Names – I wrote this post for myself, thinking it would fall flat. Because, really, baby names inspired by swans? Yes. Really. Sort of wishing I had the chance to use Svana.

Arbor, Rowan, Acacia: Best Tree Names for Babies – You could fill a forest with the amazing tree name possibilities. Linden tops my list.

Rare 1885 Baby Names – This post! We love antiques, of course, and 1885 includes some amazing rarities. Think Houston, Clotilde, and Fielding. But it has surged to the top thanks to Pinterest, and if this list were based on the last 30 days alone? It would be the runaway #1 post.

Eight Unexpected Nicknames for Penelope – We never tire of dreaming up great nicknames for popular names. Penelope lends itself to more than you might think!

Noah, Luca, and Cuba: Boy Names Ending with a – Because a endings aren’t reserved for girls anymore, and there are many ideas beyond Noah.

Ooh La La: French Names for Girls – A perpetual top ten favorite around here, ever since it was published in 2008. It comes as no surprise to find it on the best baby names list 2016 – eight years later!

It Girls: Girl Names Ending in et and ette – From Juliet to Scarlett to Colette, some of the most stylish girl names today are the -et Girls.

Long Names for Girls: Elizabella and Anneliese – At a moment when plenty of parents opt for show names, or the nickname version of a name, many of us are going the opposite direction. Four syllables – and even five! – make a name stand out.

Adalia to Zinnia: Girls Names Ending with ia – Move over, Olivia and Sophia. Plenty of gorgeous girl names ending with -ia remain outside of the Top 100.

Ellington, Anniston, Hollis: Surname Names for Girls – Yes, yet another surname names for girls post. What can I say? This style really does appeal. I was obsessed with preppy surname names in my mid-twenties – if I’d had children then, they might have had surname names.

80 Boy Names Ending in O – Yes, 80. And yes, I probably could add another dozen or two. Steadily ranked among the best baby names lists 2016 all year.

Ten Unexpected Nicknames for Charles – Sure, Charlie is a lovable nickname. But classic Charles offers many more options.

The Great Big List of Bird Names for Girls – Because Wren has soared, but there are dozens more possibilities out there.

Schwoo! If you’ve made it this far, I wonder – are there any types of list posts you’d really like to see in 2017?