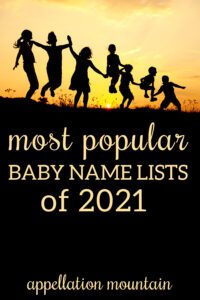 A few weeks ago, I shared the most popular girls’ names and boys’ names at Appellation Mountain for the calendar year 2021.

They’re fascinating lists – a mix of current trends, reader favorites, and names that are only big on this quirky little site.

But the real stars ’round here are lists.

Scarlett and Juliette make so many parents’ short lists. But dozens of possibilities await, from vintage Georgette to imported Ayelet to well-why-not Evolet.

In an age of Olivia and Isabella, no surprise parents are looking for more long and lovely choices for their daughters. This list includes some of the best.

#23. LEO NAMES: FROM LEONARD to LEOVANNI

One of the reasons this site exists is probably my struggles with my son’s classic, family name. Couldn’t we – shouldn’t we – use a more inventive nickname than Alex? Our kid had ideas of his own, but this list might help out another Alexander.

Theodore is among the coolest of classic names for our sons. No surprise that sister names Thea and Theodora are trending, too. But when it comes to TH names, there are so many more possibilities to consider.

Millie is the new Molly, a brief and high-energy nickname name that now stands on its own. Except Millie is also short for a dozen or more longer names, collected on this list.

A generation came of age on Harry Potter, and some of the names – like Luna – have become mainstays. But how ’bout the entire culture of naming implied by the books and the universe they’ve created? Muggles who want to name like magical families, this list is for you.

Night sky-inspired names have always been with us. Just ask the parents of Esther – star – or any of the dozens of names from mythology. This list rounds them all up, from the obscure Marama to favorites like Stella.

It’s easy to imagine that everyone named their babies Mary and John back in the 1880s. Not so! This list looks at some of the names on the fringes of the US popularity charts – then and now.

These are names you can count on! Perfect to commemorate a special date, or maybe a child’s place in the family. (A fourth kid called Ivy is all kinds of charming.) And yes, following the early seasons of Stranger Things, we have seen at least a few girls named Eleven.

Classic Charles is buttoned-up and accomplished. But this name’s many short forms? They’re breezy and cool, edgy and interesting. For a short(ish) given name, Charles is infinitely flexible.

Every generation tends to prefer a different Elizabeth nickname. Betty gave way to Lizzie and Liz. But a roomful of women could all be Elizabeth and still have distinctive nickname options, from Birdie to Liza to Elle.

Not so long ago, boys’ names ending with consonants. Maybe the occasional Y, as in Henry or Corey or Jeremy. But mostly, a wave of Roberts and Michaels grew up to name their boys Ryan and Mason. Today, though, everything is different. No question that boy names ending with O are the new mainstream favorites, from Leo and Milo to rarer possibilities, like Horatio and Kahlo.

Torn between nature-inspired favorites and vintage gems? Turns out it’s easy to combine both. Credit the Victorians, who have been choosing flower-inspired names for girls forever … or maybe an even earlier generation, known for freely borrowing from the garden.

#11. THE GREAT BIG LIST OF BIRD NAMES for GIRLS

Robin and Raven have had a good run. Now Wren is taking off. What other bird-inspired names for our daughters could be next? Turns out there’s a flock of promising choices, from sweetly vintage Birdie to sleek and powerful Kestrel.

Plenty of parents go to great lengths to avoid matching their twins’ names – or their kids names, for that matter. But a shared first initial can also be a subtle way to tie both names together. These combinations, from A to Z, just plain work.

Step into the wayback machine and re-imagine some of today’s most popular names – just in time for your next visit to Medieval Times. There’s plenty of fancy in this list, but thanks to the scrupulously researched Dictionary of Medieval Names from European Sources, we know that they really were in use (way) back in the day.

Elegant, classic, and accessible, Rose is an enduring favorite. But it’s also the root of dozens of other names. Changing Rose to Rosalie – or Primrose or Roswitha or Rosalina – change the name’s entire vibe.

The year 1915 was a different age – more horses than cars. Player pianos, not Netflix. And yet, the names were no less innovative and delightful, especially on the fringes. These names were rare in 1915, and would still be style-standouts in 2022.

Confession: spunky is a problematic word. After all, when boys are high-energy and adventurous, we just call them … boys. And yet, “spunky” captures the quality so many of us seek while naming our daughters: bold, upbeat, unafraid to climb trees or change the world. This list offers up some of the best.

Stand on a playground these days, and it is easy to imagine that every boy is called Jack, Kai, or Cole – brisk, one-syllable names without a lot of syllables. But the numbers tell a different story, with choices like Julian and Sebastian dotting the US Top 100 – and even more long boy names to consider waiting on this list.

We sometimes assume that popular names can’t be cool. This post is here to prove otherwise. After all, names catch on because we find them fresh, new, and yes – cool.

If you’re determined to find a naming with an inspiring meaning, this list is for you. Bonus? Not only are all of the meanings appealing, but the names sound just right for a twenty-first century son, too.

#2. 125 ONE-SYLLABLE MIDDLE NAMES for GIRLS: BESIDES GRACE and ROSE

This list started with 125 one-syllable middle names that could replace the ubiquitous Grace and Rose. But oh, how, it has grown! It’s been a chart-topping favorite around here since it debuted in 2018.

Liam might be the #1 name for boys right now, but in many ways, we’re living in the age of Jack. It’s the name of every action hero. There’s one in (nearly) every kindergarten class, too. And so many names might not be Jack, but fit the same brief, brisk style. Whether as firsts or middles, cool, short boy names are favorites.

There you have it – the most popular name lists 2021! Perfect reading for when you have a few hours to spare, or a quick shortcut to finding exactly the right name.