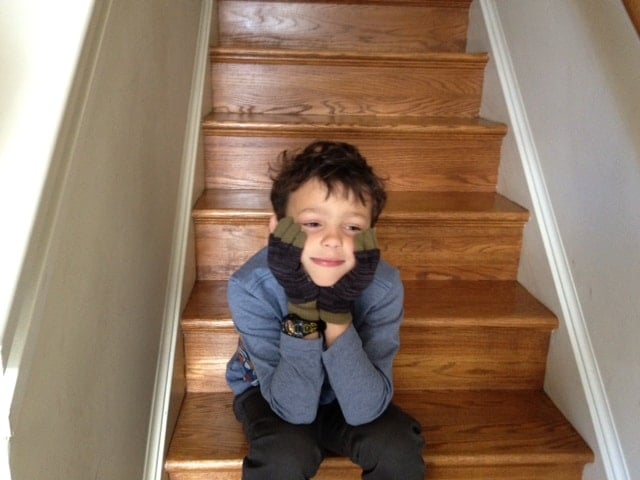 They say that once you choose your child’s name, be it Kaydon or Atticus, Balthasar or Brady, your child becomes that name.

Sometime around 1976, I trotted off to nursery school and discovered I was one of many girls named Amy. And thus was born a life long obsession with names.

My mother’s one and only baby name book – the guide she thumbed through while naming all four of her children – eventually fell apart beneath my grubby mitts.

“Why,” I’d query my long-suffering mother, “didn’t you call me Chantal?”

“Really,” my mother would reply. “Would you really want to be Chantal?”

I would think about it, scan the page again and ask, “How ’bout Chandra?”

At this point she would ship me outside to play. Sometimes I took the book along and rechristened my dolls things like Faustine.

Years later, I found myself having similar conversations with my husband-to-be. “No. We can’t name our kid Caradoc.”

“Do we have to talk about this now? Maybe wait until there’s actually a baby to name?”

I kept raising the subject, and eventually we reached The Great Naming Compromise of 2001. We would name our firstborn son after his father (Alexander) and our firstborn daughter after my mother (Clarina).

But it wasn’t quite that easy, not even after the ultrasound tech declared it was a boy.

I mulled it over. Name aficionado that I’ve always been, I knew two things: first, Alexander was already a Very Popular choice. (It ranked #15 in 2004, the year our son was born. By last year, Alexander reached #6. And that’s not counting the just-Alexes, the girl-Alexes, or the creatively-spelled-Alexxes and Alyxes.) My husband veto’d Alasdair. (“We’re not Scottish.”) He didn’t even want to consider Evander or Iskander, though I argued that they were quite close.

My fail safe was this: the list of nicknames for Alexander took up a paragraph, even in that old, much-thumbed through baby name book from my youth.

Factor in my husband’s roots – his parents came from Poland not long before he was born – and I figured I could push an unconventional nickname. “Is Alexei the Polish nickname for Alexander?” I asked, innocently.

“I’ll ask my mom,” he replied, but never did. I looked it up, and found Aleksey listed as the Polish nickname.

Done, I thought triumphantly. All over but the spelling. Alexy, maybe? Would that be a good compromise? I thrilled every time an ESPN reporter mentioned a hockey player named Alexei. My husband is a Huge Hockey Fan. Surely, that would sway him.

Our son arrived and two things happened: first, it turns out that you don’t have a second to think about your child’s nickname. Everyone wants to know, pretty much immediately. And if you don’t tell them, they just assume that the most common nickname is the one you’re using.

Second, much to my surprise, my in-laws called their firstborn grandchild Oluš – oh LOOSH. In some parts of Poland, Aleksander might be Aleksy. But in their region? Nope. Loosh was cute, but I couldn’t introduce my kid as Loosh. As for Sasha, another possible diminutive, it was vetoed as unbearably Russian.

Friends also chose Alexander around the same time, with the intention of calling their kiddo Xander.

But somehow we each ended up with an Alex.

I didn’t fuss about it at first. Because Alexander/Alexei/Aleksey/Alexy/Alex had another name in mind: Aly – the name he used for himself as soon as he could talk.

Over the past not-quite-five years, Aly has stuck. He’s aggressively boyish with wild curling hair. The name he chose for himself is simply the right name. And I respect that.

Then I had to register Aly/Alex/Alexei for summer camp. At a loss about what name to put on the form, I asked my son, confident that Alexei would win. He’d chosen Alexei for his hockey jersey, after all.

I fetched from camp a few days ago, and when the head counselor called Alex, more than one little head swiveled. My son popped up, along with another little boy.

“We’re both Alex,” said the other boy.

“Yeah,” Aly added. “There’s me. And there’s Alex Smith, and Alex Anderson, and this is Alex Jackson. Plus there’s Alex Hunter, but he’s BIG!”

As we left camp, I queried my son. “There are lots of Alexes,” I said.

“Are you sure you want to be Alex? You can be Alexei. You could be Aly. Or we could choose another nickname.”

And so we’ve come full circle. My mother hated her unusual name, I hated my super-common name and my kid? He’s perfectly happy to be one in a crowd.

Years have passed, and I still call him Aly. That might read feminine in some circles, but it hasn’t been an issue. Well, not for that reason, anyhow. Our Muslim neighbors thought I was calling him Ali and did a double-take when they met him.

I’ve read before that kids like having common names, but I’ve never believed it – it was so very opposite my experience. But my husband – who grew up Arthur in a sea of Jasons and Michaels – tends to agree with my mother, a Clarina amongst Marys and Janets.

For a while, Aly’s name remained fluid. But then it settled. He’s Alex to pretty much everyone else on Earth, but at home? He’s still Aly. Plenty of us have names like this – a public-facing one, and an affectionate nickname only for our nearest and dearest.

I didn’t get to choose exactly the name I longed for, but it’s absolutely his name, and I’m content with how well he wears it – even if he’s sometimes one in a crowd.

But when Clio comes home and wants to know why I didn’t name her Madison?

That’s gonna be a tough day.