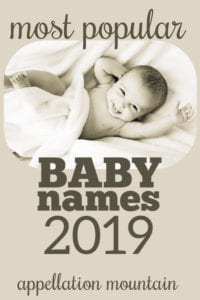 Time to look back at the most popular names 2019 at Appellation Mountain.

These are the most-read posts here at the site. It’s a wild, quirky list. My Top Ten looks nothing like the US Top Ten. And yet, the names that rank here often do make their way up the popularity charts over time.

And speaking of numbers … this is actually the Top 16 and change. That’s because this list fuels March Madness baby names, coming in, well, March 2020. We’ll pit all the reader favorites against each other in a series of match-ups running every Saturday, until there’s just one boy name and one girl name left to take home the trophy.

But for now, we’re just looking back at the names that had a great year in 2019. Some surprised me. Others do match up with what’s trending elsewhere. But I can promise this is a list like none other!

Classic and buttoned-up, but not too starchy, Reid feels like a modern traditional pick. One challenge: spelling! Reed, with two Es, ranks about 100 spots higher on the US popularity charts. Combined, it’s more popular than it seems.

Rugged and outdoorsy, Ridge follows a long list of outdoorsy boy names, from River to Forrest to Heath.

A romantic place name with a heroic, literary prince attached. How can Caspian not succeed?

Soundwise, Fox falls somewhere between Max and Felix. Better still, this generation of parents grew up watching Fox Mulder seek the truth on ten seasons (plus) of The X-Files.

The firstborn son of a prince and an actress would always make headlines, but with a name as adorable as Archie, the attention doubled.

A long-rising favorite, Arlo has gone from edgy to mainstream favorite.

A Hawaiian name that marries the best of Kai and Noah.

A Presidential surname name that blends the appeal of Hayden and Brooks.

Launched by Fantastic Beasts, but with all sorts of reasons to feel wearable.

The ultimate surname name, seldom heard as a first.

Current US popularity rank: unranked; Grey is #727 and Grayson is #32

A color name that belongs to the boys, after years of Grayson rising through the US Top 100.

A tough guy name, thanks to the Fast & the Furious franchise.

At home on a hiking trail or in the boardroom.

A word name that leans a little bit superhero.

An Irish appellation that follows so many popular two-syllable, ends with -n names.

A nature name with that sharp  middle V sound.

A logical longer name in the era of Emma, Emily, and Adeline.

Powerfully popular, in the US and on Appellation Mountain, too.

An old-fashioned name, packing lots of style into just one syllable.

The most popular of the bird names, and the name I cite when others insist animal names are just too out-there.

JD Salinger used the name in a story. So did Stephenie Meyer. Twilight raised the name’s visibility, but those older literary roots combined with a great meaning – love – helped this name soar.

Once a nickname for Theresa, Tess is often elaborated Tessa. But it’s just Tess – literary, thanks to Thomas Hardy – that ranks highest on Appellation Mountain.

Juniper descends from vintage June and 70s chart-topper Jennifer, by way of Willow and Rowan. It’s a nature name with a bouncy energy, now nearly as mainstream as the names it followed.

A logical successor to Penelope.

A surname name in the key of Top 100 favorite Quinn, sleek Sloane offers a boatload of 80s and 90s references – but feels like a name at home in the twenty-first century.

Vintage, richly meaningful and nicely compact, Vera has shaken off the dust and joined Ava and Evelyn as a fast-rising favorite.

An elaborate, night-sky alternative to Isabella or Luna.

We do like a middle-V name. Just ask Ava, Ivy, and Evelyn … and now maybe Sylvie, too.

Part-flower name, part-color name, and the perfect mix of easy to spell and pronounce, while still being quite rare.

An imported Susan nickname occasionally heard on its own. The youngest Bailey child in It’s a Wonderful Life answers to Zuzu.

A sleek, sophisticated surname name option for a girl.

The Finnish word for snow, and an on-trend choice with Lucy, Luna, and Louisa so in favor.

It looks like Noah, hold the H, but Noa claims separate – and feminine – roots in the Old Testament.

A sweet and spunky Margaret nickname, with a certain retro appeal, Maisie was the #1 girls’ name post on the site this year. Could it translate to big gains in the US charts, too? We’ll have to wait and see …

So why are there 21 names on the girls most popular names 2019 list, compared to just 16 for boys? The following five girls’ names have previously won March Madness: Cora, Sylvie, Isla, Wren, and Louisa. Past winners are not eligible to compete in the contest, so I kept going until we had sixteen names that could take part. 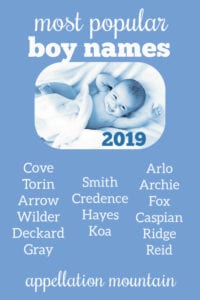 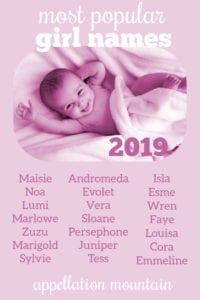