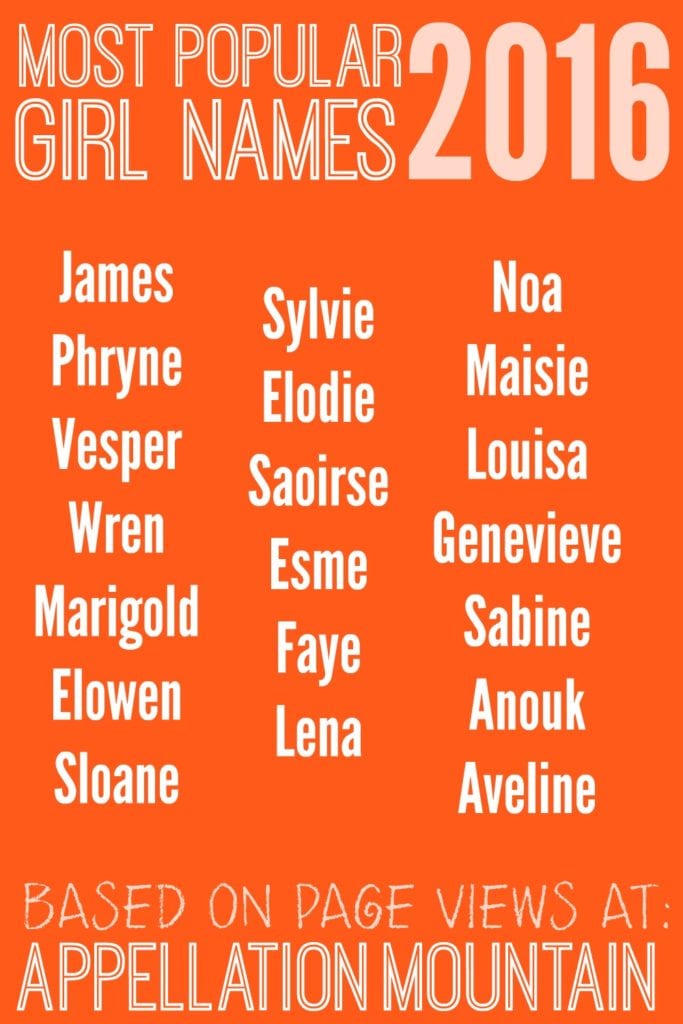 What were the most popular girl names 2016? Sure, Emma and Olivia top the official US list, and names like Sophia and Harper fared well on website-specific charts, like Nameberry and BabyCenter, too.

But the most popular names list at Appellation Mountain always looks a little different. That’s because this list comes from the most popular name posts here – not exactly the same thing. Every year, I write about 150 names or so, with an emphasis on the quirky and the unexpected.

That means that the most popular girl names 2016 here bear no resemblance whatsoever to any other list. Plenty of these names are trending upwards, and I expect many to rise when the official US data is released in May 2017. Others? They’re rare, and chances are that they will remain that way.

Read on for the most popular girl names 2016, according to all of you lovely readers.

James – Yes, for a girl. Back in May 2015 I wrote a post called “James for a Girl: Baby Name of the Day.”  This was a few months post-Blake and Ryan’s big reveal. I noted that it had become a very popular middle name choice for girls in recent years – a trend that has accelerated in 2016. While a poll showed that more than 40% of readers opposed James for a girl, the post remains the absolute #1, far and away most viewed post in the girl names category.

Vesper – A night sky name worn by a Bond girl, Vesper picks up on several trends. It’s a sister for Stella or Luna, an alternative for Harper or Piper, and, thanks to the letter V, a sharply stylish choice in the key of Vivian and Ava. Still, it’s slightly surprising to see Vesper rank all the way up at #3!

Wren – A quiet nature name, Wren flew under the radar for years. It often appeared on birth certificates as a middle name. (It’s my daughter’s bonus middle!) Today it appears in the US Top 1000, with about 4oo girls receiving the name last year. I suspect Wren really shines in the middle spot, but we lack reliable data on middle names.

Marigold – Another name boosted by a period television series, Marigold is Lady Edith’s illegitimate daughter on Downton Abbey. There’s much drama (obviously) involving her birth, and later her joining the household as Edith’s ward. The name feels surprising at first, but it’s every bit as wearable as Lily or Rose. The flower’s name come from a phrase meaning “Mary’s gold,” as in the Virgin Mary, lending the name a spiritual side, too.

Elowen – Elowen proves that it isn’t just English speakers dreaming up new names. This Cornish import means elm tree. That puts it in the company of Rowan and Willow. Three dozen girls received the name last year, possible thanks to our affection for every Ellie name under the sun. That’s still quite rare, but on Appellation Mountain, it stands at #6.

Sloane – When Ferris Bueller took his unforgettable day off, his gorgeous and kind girlfriend Sloane Peterson went along for the ride. Another 80s reference? Princess Diana spent her free time in London’s fashionable Sloane Square, making her a Sloane Ranger. (Really.) The name didn’t start to rise until later, after HBO’s Entourage gave us a Sloan – no ‘e’ – as a girlfriend for Eric, often called E. Today the tailored name is rising in both spellings, though it is Sloane that ranks just outside the current Top 300.

Most Popular Girl Names: Rounding out the Top Ten

Sylvie – Sylvie has sparked serious chatter in the world of baby naming, thanks to this Swistle post. It’s also fared well in March Madness, winning the 2016 tournament. It makes sense – Sylvie fits with Sadie, but shares the ‘v’ of so many stylish names. And yet, as of 2015, Sylvie remained outside the US Top 1000. For now.

Elodie – I’ve been watching Elodie for years. Depending on your perspective, it’s either a logical successor to musical Melody, or a name that will forever sound like it’s missing something. Like Elowen, it fits with the Ellie names. And American parents never tire of French imports.

Saoirse – Saoirse rounds out our Top Ten. Parents love Irish names, from boy’s choices like Connor and Liam to girl’s names like Maeve. But Saoirse fits in with those gorgeous girl names that can prove challenging in US. Still, Siobhan briefly cracked the Top 1000 during  the 1980s. And we all know Sinead, thanks to the singer. Now talented young actress Saoirse Ronan promises to make her appealing name more familiar across the world.

Esme – Literary long before Twilight, Esme gained more notice thanks the books’ vampire matriarch. But this short name, with style to spare, has history well before Stephenie Meyers’ paranormal romance. An update to faded Amy, a name with more sound than Emma, Esme has climbed the charts, reaching the Top 700 in the US – and #11 on Appellation Mountain.

Faye – Faye packs a style punch for such a slight name. It brings to mind fairies – sometimes called fae. It reminds us of iconic King Kong actress Fay Wray. And a young Liv Tyler played the gorgeous Faye in That Thing You Do. Add it up, and there’s plenty of reason to embrace this short, sweet appellation. At the moment, however, Faye just barely ranks in the US Top 1000.

Lena – Timeless Lena can be short for several names, but feels complete on its own. Lena Dunham, creator of Girls, adds a certain millennial cool to the name, and the legendary Lena Horne takes it in a jazzy direction. The name currently ranks in the US Top 300, and is rising.

Noa – Lest you dismiss Noa as a creative spin on Noah and put it in the same name-theft category as Noah, know that the name is actually separate – and feminine, dating back to the Old Testament. Noa recently topped charts in Israel, and has started to catch on in the US, too, a mini name in the key of Mia and Ava.

Maisie – Sassy and retro, Maisie claims Scottish roots, by way of Mairead, their form of Margaret. While the name has been used for years, it’s only recently entered the US Top 1000 as an independent name. Henry James penned What Maisie Knew way back in 1897; a 2012 movie adaptation seemed to spark more interest. There’s also intrepid female detective Maisie Dobbs. Combined with Phryne, I think I see a theme …

Louisa – For years, Louisa served as my go-to example that great, traditional names ranked outside the Top 1000. Which boggles the mind, because Louisa comes with great nicknames (Lulu, Lucy, Lou, Lucy-Lou, okay I’ll stop now!), plus all the literary cachet of Louisa May Alcott. But it’s true. From 1970 through 2013, this name failed the crack the 1,000 most popular girl names in the US. Those days are over, though, and Appellation Mountain readers rank Louisa all the way up at #15.

Genevieve – Here’s a fun fact: Genevieve is the third name on this list to belong to a past March Madness winner. (Sylvie and Louisa are the other two.) Saintly and stylish, Genevieve brings to mind Paris – both because the name is French, and because the saint is the city’s patron. It’s a nickname rich possibility that recently returned to the US Top 200.

Sabine – An ancient name borrowed from a tribe, the kidnapping of the Sabine women is a famous historical event often depicted in art. In German, the name sounds more like Sabina, but in English, you might expect a two-syllable pronunciation instead. It remains rare, possibly because of the negative associations from history. It’s much more common in Europe.

Anouk – Speaking of Europe, Anouk is used in Dutch and French as a nickname for Anna and Anne. It’s much more common in Europe, but perhaps American parents are cautiously considering this name. Legendary French actress Anouk Aimee might contribute to some of the interest.

Aveline – There’s no mystery behind our interest in Aveline. Take Ava and Evelyn and Adeline and you’ll arrive at Aveline. As it happens, Aveline traces its roots back to the Middle Ages. The Dictionary of Medieval Names from European Sources lists it as a form of Ava. It has tripled in use in the last three years, but has yet to be given to even 100 girls in a single year. But something tells me that the data for 2016 and 2017 might look every different.

They share a lot in common with the other most popular girl names 2016. They’re far from the US Top 20, but combine style and fascinating stories to make the kinds of names that truly belong of a best-of list.

As I mentioned in the boys’ post, the Top 16 names will move on to compete in March Madness baby names, beginning the first Saturday in March 2017. However, past winners are ineligible. This means that Sylvie, Genevieve, and Louisa will not compete; however, Sabine, Anouk, and Aveline will take part.

My latest conundrum: should James be allowed to compete in the girls’ March Madness? I’m torn, and would love to hear your thoughts.

What are your favorites from the most popular girl names 2016? Does the whole James-for-a-girl thing surprise you? I almost left it off the list because it just seems like an outlier – but it really was the #1 name post, by far!