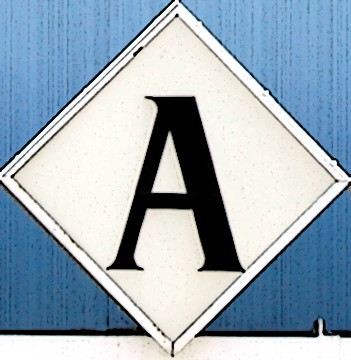 Editor’s note: This post was originally published on January 31, 2008 and was substantially revised and re-posted on January 26, 2013.

A is for Apple. As in Apple Blythe Allison, big sister to Moses Bruce Anthony and firstborn of Gwyneth Paltrow and Chris Martin.

If that’s too out there for you, consider these slightly less exotic A names for girls.

Avalon – This paradise from Arthurian legend might have been an unthinkable baby name choice just a decade back. But with Ava in the Top 10, and Avery rocketing up the Top 100, Avalon starts to look like an interesting alternative. It’s feminine but not frilly, geographic but not specific and familiar without being common. Avalon is not currently in the US Top 1000.  A similar possibility?  The literary Avonlea.

Anya – Anya is a bit more interesting than the classic Anna, and yet still a simple choice. The name has a certain European flair and pairs well with even the most tongue-twisting surname.  She ranked #432 in 2011. There’ also Anja.

Adelaide – Maddie is epidemic, thanks to Madison, Madeline and variations thereof. Little wonder that Addison and Adeline are making a beeline up the popularity charts. But Adelaide is a regal, Granny-chic choice that could be the most distinctive of the bunch. Though she’s climbed from #921 in 2006 to #407 in 2011.  This makes her relatively underused, but no longer truly rare.

Amaya – Many families are looking for a name that spans multiple heritages – or maybe sidesteps them entirely.  Amaya is one that works. While it sounds like an “A” grafted on to the popular Maya, she has Spanish roots and is also listed as a Japanese name.  Amaya makes for an interesting, sophisticated choice, and a pretty one, too.  Mariska Hargitay chose the name for her daughter.  She ranked #210 in 2011.

Alice – In recent decades, variants like Alicia and Alyssa were all the rage, while Alice remained current only in the children’s section of the library. Today, the tide is turning, and quiet Alice feels fresh again. Starbaby Alice Zenobia is Tina Fey’s daughter and one of Twilight’s good vampires is called Alice, too.  At #142 in 2011, she’s quite stylish.

Agatha – Disappointed that Alice is so popular nowadays?  Consider Agatha.  Just as vintage, but far less used for this generation.  Short form Aggie is just as sweet as Addie or Abby, so there are plenty of reasons to consider reviving Agatha.  Another possibility?  Agnes, recently used by Jennifer Connelly and Paul Bettany.

Azalea – Unusual floral names are all the rage, and Azalea is one that could work.  She makes for an elaborate, showy name, without any obvious short forms.  Zalie, maybe?  But that’s not a bad thing.  With girls called Olivia, this one would be easy to wear – and since she’s not in the US Top 1000, surprising, too.

Ariadne – Names like Arianna and Adriana are popular choices.  But this mythological choice is seldom heard.  Too bad, because she’s got a better story than many a Greek maiden.  She helped Theseus outwit the Minotaur.  Another little used possibility?  Atalanta, the fleet-footed runner who refused to marry until she found someone who could match her pace.

Antonia – She’s a literary choice, thanks to Willa Cather’s novel, and an underused one, too.  As of 2011, she failed to chart in the Top 1000, even though masculine form Anthony charted at #11.  Other possibilities: Italian elaboration Antonella, or even the frilly, French Antoinette.

Astrid – This Scandinavian name was mocked on The Office, and remains outside of the US Top 1000 today.  But she’s familiar to most of us, thanks to Pippi Longstocking creator Astrid Lindgren.  If you’re after a frills-free name for a daughter, Astrid could work.

Astoria – She’s a place name with short forms Story and Tori built right in.  Another unusual option borrowed from the map?  Abilene.

Ada – A short, vintage choice, Ada packs a style punch.  She’s also a nineteenth century mathematician and daughter of Lord Byron.  Ada stood at #494 in 2011, an obvious alternative for the lovely, but overused Ava.

Aderyn – Another potential Addie name, Aderyn is a Welsh name meaning bird.  There are plenty of reasons to embrace this import, but her pronunciation is tricky.  Emphasis is on the middle syllable – ah DER in.  Another unusual name A name along these lines?  Scottish surname Adair.

What’s your favorite letter A name for a daughter?  Are there other rarities that should make this list?

A is for Boys

B is for Girls