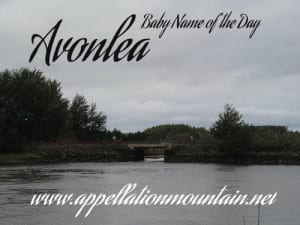 She’s one of the most famous fictional places ever, right up there with Oz.

Thanks to Kaeli for suggesting Avonlea as our Baby Name of the Day.

We love her for lots of reasons.  For one, Anne Shirley is a name nerd.  When she arrives as a young orphan, Anne tries to convince her new family to call her Cordelia.  When they refuse, she tacks the “e” on to Ann.

But it’s more than that: since the first novel’s 1908 publication, it has been translated into many languages, spawned sequels and stage and film adaptations, and sparked tourism on Prince Edward Island, the site that inspired so many of the fictional Avonlea locations.

There is a real village in Saskatchewan called Avonlea – but it was named after the books.

In the 1990s, a television series called Road to Avonlea was adapted from some of Montgomery’s other novels, the ones that started out with the arrival of Sara Stanley in Avonlea.

The television series seems to have inspired parents to consider Avonlea as a given name.  It debuted in 1990, and that’s the first year more than five American girls received the name.

Then again, the 1990s were the beginning of the place name trend.  Brittany and Chelsea were both in the Top 100.  Bethany was just outside.  Even without the television series, parents might have considered the place name.

Where did Avonlea come from in the first place?

It must be borrowed from Avon – an old word for river, and often the name of rivers, creating the slightly repetitive River Avon.  I would assume lea refers to a field, just like with so many ends in ley surnames.  So the pretty and picturesque Avonlea refers to a river by a field.  In a funny way, that makes Avonlea an almost generic place name.  Avonlea could be anywhere.

For years, I wanted to pronounce Avonlea with four syllables: ah von LEE ah.  But I think that’s probably just me.  With her three syllable, ends-in-ee sound, she fits right in with so many girls’ names, from modern inventions to traditional choices.

All of this makes Avonlea a shape-shifter – she feels like a charming choice from an earlier time, the gentle land of Anne.  But as a given name, she’s undeniably a modern innovation.

Factor in our affection for Ava and our embrace of place names and literary appellations, and the surprise is that more parents aren’t using Avonlea.  The similar-sounding Avalon, borrowed from Arthurian legend – is attracting attention, too.

On the one hand, calling your daughter Avonlea certainly marks you as a fan of Anne.  But it almost defies the imagination to think of someone perceiving the books as a negative reference.

In other words?  You might be meeting a baby Avonlea sooner than you’d guess.