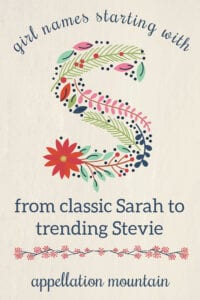 From classic Sarah to trending Stevie, there’s no shortage of appealing possibilities. After all, the letter S ranks fourth for girls’ names, behind A, E, and M.

Part of that popularity is the one-two punch of Sophia and Sofia, among the most popular names for girls around the world. Sophie ranks in the US Top 100, too, making it even more of a dominant sound.

But S names can be distinctive and different, too. This letter gives us everything from surnames Sutton and Sloane to vintage delights like Sadie and Susanna.

One S name to watch? Simone. Following the staggering achievements of Simone Biles in 2021 – she’s the most decorated American gymnast of all time – it could prove inspiring to parents.

Sophia sounds traditional, and maybe it is – the name has been around for ages. But it’s far more popular in 2021 than it was in 1920 – or at any previous point. A flowing sound combined with a great meaning – wisdom – make Sophia a favorite for our daughters.

Add up all the girls named Sophia and Sofia, and this name rivals #1 Olivia in terms of popularity. But Sofia, the preferred spelling in Spanish as well as Italian and many Slavic and Scandinavian languages, comes in about a dozen spots behind the ‘ph’ version of the name.

A colorful choice that started out as a surname for someone who dyed or sold fabric, Scarlett brings to mind two women: Gone With the Wind’s Scarlett O’Hara and Hollywood A-lister Scarlett Johansson. The first convinces us that the name has a long history of use; the second makes us see it as twenty-first century ready.

The Latin word for star, Stella directs our gaze towards the heavens. Or wait, is that Hollywood? Cinematic history includes Marlon Brando bellowing “Stella!” in A Streetcar Named Desire. Stella fits with all the Ella-Bella names we’ve loved in recent years.

Ages before we embraced place names for our children, Savannah Smiles became a modestly successful 1982 movie. Suddenly, Savannah went from sometimes-heard to the Top 1000. It hasn’t slowed down much since, remaining in the Top 100 from 1993 onward.

A simplified form of Dutch surname name Schuyler, this spelling fits with our love of last-names-first. But it also feels a little bit like a nature name, thanks to the first syllable sky.

The French form of Sophia also makes the Top 100 – and lately, it’s the version of the name climbing in use.

A spunky, sassy nickname name that feels equal parts vintage and modern, Sadie was boosted – in a big way – by reality television’s Duck Dynasty. The series – and Sadie Robertson – have faded from the spotlight, but Sadie helped popularize a wave of nickname names.

A meaning-rich word name, Serenity succeeds because it shares the same three-syllable, ends-with-y structure of so many girls’ names, from traditional Emily and Dorothy to surnames Kimberly and Kennedy to old school virtue picks like Felicity and Verity.

Classic, traditional Sarah stepped straight out of the Bible and on to birth certificates. It’s never left the US Top 1000 – in fact, only rarely has it left the Top 100.

A feminine form of classic Samuel, Samantha emerged many years later, probably in the 1700s. It remained rare, until a television character cast a spell on us all, in the 1960s supernatural sitcom Bewitched. The show also gets credit for launching Tabitha.

A warm and sunny seasonal name, Summer has gone from hippie chic to mainstream favorite.

A sleek and tailored surname with ties to Princess Di, Ferris Bueller, and Entourage, Sloane has gone from rarity to mainstream favorite in recent years.

A color name inspired by the reddish clay of the earth in Siena, Italy. Despite the single-N spelling of the place name, it’s Sienna that parents prefer in the US.

A mix of nature name, colorful choice, and meaning-rich successor to Sophia, all in one compact, unisex package.

Sarah-with-an-h has always been more popular, but Sara-without-an-h is nearly as classic.

Luna is the Roman goddess of the moon; Selena is her Greek equivalent. The late Mexican-American singer Selena put this name on parents’ radar; it skyrocketed following her tragic 1995 death and has remained in steady use since.

Tom Sawyer makes this an Americana storybook name. Sawyer fits right in with Harper and Sloane.

Part-place name, part-borrowed-from-the-boys, Sydney could be a smash-hit now … except that it already peaked in the late 1990s.

Saylor feels like a mix of surname-names Piper and Harper, and 90s favorite Taylor. Sailor – with an ‘i’ – doesn’t currently make the Top 1000 at all.

A pretty alternative to Samantha, boosted by the villain in 2002 horror sensation The Ring.

A fast-rising favorite, Selah comes from a word in the Old Testament meaning pause.

A tranquil name worn by a legendary athlete.

An Old Testament place name, rich with meaning, and derived from a word meaning peaceful.

Along with Sky – and Skylar and Skyla – this sound is quite stylish for our daughters.

Scarlett is the name, while Scarlet is the color – and an equally valid spelling option.

The French feminine form of Stephen, and a former Top Ten favorite.

An older version of Sarah, far less common but every bit as wearable.

Sylvia has hovered in the US Top 1000 around the 500 mark for years. French form Sylvie is a rising newcomer to the charts. But both names have plenty of appeal, a mix of Top Ten sounds from Sophia and Sophie, Ivy and Olivia, too.

A Biblical place name, real Salems appear all over the map. The Massachusetts town, with its legendary witch trials, takes this name in a spooky direction. But maybe that’s not fair. Depending on the name’s origin, it might mean peace or safety, both positive inspiration.

From a Spanish word referring to a mountain range, Sierra sounds rugged and delicate, all at once.

A surname name sometimes used for boys, but boosted for girls by movie characters in the 1930s and again in 1989, by Stell Magnolias.

Skylar is the more popular spelling for baby girl names, but Skyler charts, too.

Originally a nickname for Alexander or Alexandra, Sasha now stands on its own. Beyonce’s 2008 album I Am … Sasha Fierce gave the name a little lift.

Sloane without the E, given a boost by a character on Entourage.

Take Sophia, mix in Ava and Ivy, and the logical conclusion is rising favorite Sylvie.

The single-N spelling brings to mind the Italian place name.

Drop the H and Savanna is more Africa, less Georgia.

Bright and warm, Sunny makes a casual and cheerful choice for a daughter. It’s a long weekend of a name, born on the beach. Comedian Adam Sandler has daughters named Sadie and Sunny.

A number name with a twist, possibly influenced by singer Sevyn Streeter – born Amber. The number name conveys ideas about good fortune, but also spiritual ones tied to the seventh day of rest.

A tailored take on Selena.

Probably a take on Sariah.

An adventurous name made literary by To Kill a Mockingbird’s Jean Louise “Scout” Finch.

A long-time name on the edges of the US rankings, Simone could soar. After all, Simone Biles’ career continues to flourish, making this a hero name.

We tend to see this name as a phonetic take on Shea, but it might also be Hebrew in origin, too. It’s sleek and modern, without feeling invented.

Either an alternate spelling of Samara, or a name with Sanskrit roots meaning “air.”

Scarlett, with a spelling influenced by Juliette.

The birth of Kendall Jenner’s daughter made headlines when she chose this name. No matter you feel about the reality show royals, they do get some things about naming right.

A lovely, flowing name, Sariah could appeal to many parents on style alone. But it’s also a name from the Book of Mormon, which might add to its popularity for some families.

A Persian name, Soraya refers to the Pleiades constellation. It also brings to mind Princess Soraya, wife of the Shah of Iran in the twentieth century. Their marriage ended in divorce in the 1950s; Soraya remained internationally famous throughout her life.

Originally short for Alexandra, but long an independent name.

The French word for sun, Soleil is pronounced soh-lay … maybe a little bit of a challenge, but only a little. It’s summery and meaningful, a bright name with an upbeat, sophisticated sound.

A color name meaning black, borrowed from the animal.

Spicy Saffron is tailored and almost as rare as the yellow-orange spice.

The Japanese word for cherry blossom.

Once a nickname for Sarah, Sally has a long history of independent use.

We meet “the daughter of Herodias” in the New Testament. Tradition tells us she’s named Salome. Her mom puts her up to dancing for King Herod – and demanding the head of John the Baptist as reward. That’s given Salome a bad girl vibe, but there’s more than one side to her story.

The blue gemstone fits in with color names, as well as more traditional picks like Ruby and Pearl.

A European import with an appealing sound.

The French feminine form of Sebastian.

Fiery Seraphina comes from a Late Latin name associated with a class of six-winged angels. It sounds a little bit like Sarah mixed with Josephine, and it also brings to mind to many elaborate girl names we love, from Alexandra to Isabella.

The Hebrew word for peace, and sometimes a given name, too.

An Irish import, Shea might signal that the parents are baseball fans. That’s because of legendary Shea Stadium, long-time home to the New York Mets. It’s named for Bill Shea, who brought baseball back to New York, and was heavily involved in professional sports in the region.

A surname name that would fit with Top 1000 picks like Emerson.

A Hebrew name meaning “my song.”

The Hebrew equivalent of Susanna.

A place name that feels every bit as wearable as Roman or Siena.

French Sidonie comes from an ancient name borrowed from the city of Sidon, and a masculine name worn by an early saint.

Borrowed from Hollywood star Sigourney Weaver, who in turn took her stage name from a minor character mentioned in The Great Gatsby.

An Old Norse name, rarer than Ingrid, but every bit as wearable.

One of many names borrowed from the Latin silva, meaning forest.

An irish feminine form of John, via the much older Jehanne.

From a title for the Virgin Mary in Spanish: Our Lady of Perpetual Help, or Succor.

A Spanish place name, it refers to somewhere “exposed to the sun,” from the Latin solanum. It’s a lovely, sun-drenched image, and an appealing mix of modern Sol and traditional Ana, too.

An older form of Solenne, Solange has been kept familiar by a 9th century saint – and Solange Knowles.

Once a nickname for Sophia, Sonia now feels like an independent name – familiar, but seldom heard.

A plant name with a gentle, soft sound.

A calendar name in the key of Summer, Sunday feels spiritual and meaningful – and very rare.

A midcentury chart-topper, Susan has teetered on the edge of the US Top 1000 in recent years, seldom heard for our children.

Surprising, but true – Susanna hasn’t appeared in the US Top 1000 for years. Susannah-with-an-h is even rarer. But this traditional, lyrical girls’ name could wear well today.

Mother Svea is the personification of Sweden, and this name is a popular choice for girls born in Sweden today, sharp and appealing.

What are your favorite girl names starting with S? 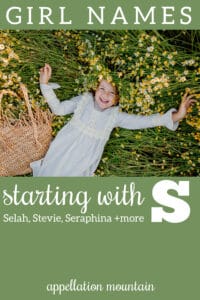 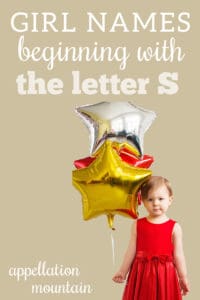