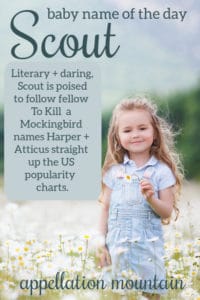 Scout could join fellow To Kill a Mockingbird names Harper and Atticus as a fast-rising favorite.

Our Baby Name of the Day comes from this list of new names for girls.

In French, écouter means to listen. An earlier form of the verb was spelled escouter, with the same meaning. It came from the Latin word ausculare, to listen to.

Sometime in the 1300s, the older version of the French word gave us the verb scout – to observe or explore, or to seek information.

Eventually, the word became a noun for someone who was exploring in search of new information. There’s a brief period in the eighteenth century when a competing word, borrowed from Scandinavian, meant to mock or taunt. But that has faded, and it’s the earlier sense that prevails.

The image is so strong thanks to Robert Baden-Powell, a British army officer. Way back in 1906, Baden-Powell wrote a book titled Scouting for Boys. He’d written on the topic for a military audience previously, but this took things in a different direction. On publication in 1908, it became a sensation. While Baden-Powell imagined that existing organizations would adopt the outdoorsy principles for their own programs, the opposite happened.

Boys clamored for their own scouting groups. It grew quickly, and spread world-wide. Initially, the sister organization was known as Girl Guides, but that changed. Now scouting is a catch-all term for many similar organizations, and scout is used as a unisex term.

Since the earliest days, members promised to conform to the ideals of their organization, beginning with the phrase, “On my honor …” The phrase “scout’s honor” makes this feel like outdoorsy – but maybe a little bit like a virtue name, too.

The world met Jean Louise Finch, nicknamed Scout, in 1960. She narrates a story from her childhood, featuring her father, attorney Atticus Finch. It’s all about race and justice in her small Southern town during the Depression. The story resonated in 1960 America, becoming an instant bestseller.

To Kill a Mockingbird won a Pulitzer Prize the following year. By 1962, we had a big screen version of the story, with Gregory Peck as Atticus Finch. He won a Best Actor Oscar for the role.

The novel gives no direct explanation for the character’s nickname. A handful of Scouts – at least some female – appear in earlier US Census Records, so Harper Lee didn’t pull it out of thin air.

But most of all it fits. The narrator observes the events of her childhood, and reports back, many years later. She’s brave and independent, too, qualities we expect of a Scout.

Decades passed. And then, seemingly out of the blue, 12 girls and 9 boys received the name in 1992.

Chalk it up to celebrity influence. Bruce Willis and Demi Moore, at the height of their Hollywood A-list fame, named their second daughter Scout LaRue Willis in 1991. They’d name her older sister Rumer, after the poet. So it tracks that they’d use something unisex and gutsy for their second child, too.

That sparked just enough interest in the name to see it go from unheard-of to very rare.

Something else happened in the 1990s, and proved far more influential than a celebrity birth announcement.

Then the book turned forty, just as interest was growing in One Book, One Community programs. The idea? Get hundreds – maybe thousands – of residents to all read the same book together, and then to discuss it. Elegant and powerful, successful in tiny towns and sprawling metropolises. And the overwhelming favorite title for such endeavors?

To Kill a Mockingbird, read by well over six dozen communities over the last twenty years.

No surprise, then, that lots of us report it’s our favorite book. And as the programs gained steam in the early 2000s, the names all twitched, rising in use slightly – and then slightly more still.

That tracks with Harper and Atticus, the other names from the novel.

Scout feels like a perfect pick for our age. The literary character makes it just feminine enough, though I wouldn’t be surprised to meet a boy by the name. It projects an image both capable and caring, honorable and adventurous. And while noun names can feel too modern, this one takes on an almost traditional feel, since the book came out way back in 1960.

My guess is that we’ll hear nearly as much of Scout as we have of the other To Kill a Mockingbird names in the years to come.

Would you choose this name for a daughter? 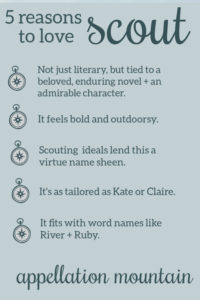