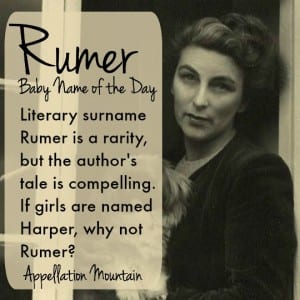 Long before Harper was a sensation, another literary surname name inspired a few parents.

Thanks to Christina for suggesting Rumer as our Baby Name of the Day.

The woman who made this name name famous was born Margaret Rumer Godden in 1907.

Margaret’s dad was a shipping company exec, so she and her three sisters were raised in India, though their childhood home stands in present-day Bangladesh. 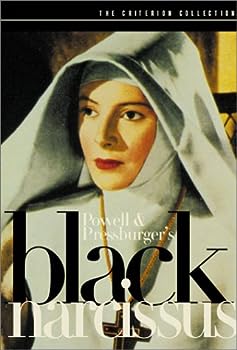 Another Godden daughter was called Nancy, and another was named Winsome, but called Jon. (I couldn’t find the fourth Godden sister’s name! Does anyone know?)

Jon also became a writer, and she and Rumer co-authored the memoir Two Under the Indian Sun, about their childhood abroad.

But it was Rumer who became the most successful sister. Her breakout novel was 1939’s Black Narcissus, about the experience of European nuns in India. It was among several of her works eventually adapted for movies or television, several during her lifetime.

The writer converted to Catholicism later in life, and several of her novels have religious themes, in addition to vivid depictions of life in India.

So Rumer is a surname, but what does it mean?

Rumer is not related to rumor – an unverified story or report. But the sound is identical. We do love word names, but we generally require the meaning to be virtuous or uplifting. Rumer doesn’t check that box.

Rumer: Named After the Author

Around three dozen girls have been named Rumer since the 1990s. But were they inspired by the writer, or by the Moore-Willis family?

Demi Moore and Bruce Willis were major movie stars when they married in the late 1980s, thanks to St. Elmo’s Fire and Moonlighting and Die Hard. Demi posed nude on the cover of Vanity Fair when she was expecting the couple’s first child.

Rumer Glenn Willis was born in 1988, and named after the writer. Her younger sister, Scout LaRue, also received a literary name. The littlest Moore-Willis is Tallulah Belle.

Pakistani-British singer Sarah Joyce was born in 1979, but took Rumer as a stage name when she launched her singing career. She scored two Brit awards in 2011.

The first year that Rumer was given to more than five girls in the US was 1991, so that might have something to do with the celebrity baby. Now that she’s an actress in her own right – and a recent Dancing With the Stars champion – it’s easy to imagine a younger generation of parents finding Rumer familiar as a girl’s name.

We’re also big fans of ends-with-r names for girls, and names with literary ties – from Emma to Harper – are all over the US popularity charts. And from Biblical Ruth to nature name Rue to glittering Ruby, we do like the roo sound.

While Rumer remains a rarity, it’s definitely an interesting one. Tailored, literary, with an on-trend sound, if you’re after a name that your daughter won’t have to share, Rumer is one to consider.

What do you think of Rumer? Could it be another Harper?