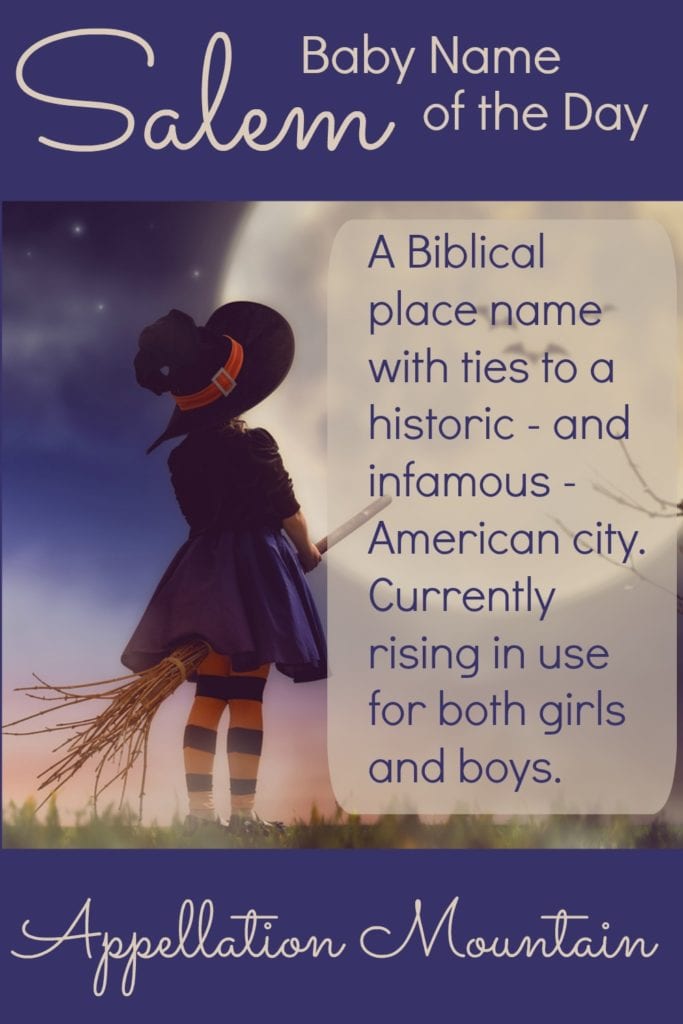 Salem takes center stage for a Halloween-inspired Baby Name of the Day.

Like many a popular place name, this one traces its roots to the Bible.

We know that Melchizedek reigned there as king. The Old Testament mentions other places, too.

My Biblical geography fails me, so let’s just say it might – or might not – be the same place as Jerusalem.

Places named for the original are found all over the world. You can find them throughout the US and the UK, Canada, South Africa, Germany and Sweden. But one stands out from the rest.

The Massachusetts city would be historic even without the witch trials. European settlers arrived in 1626. Native Americans traded there earlier. It became a significant port for the newcomers, too.

The events of 1692 make the town world famous. Witch trials took place in Europe, and elsewhere in the colonies, before 1692. But the mass hysteria associated with the Massachusetts events was especially dramatic. Twenty lost their lives to execution, and more died in prison.

The tragic lessons live on, in part thanks to Arthur Miller’s The Crucible. Miller wrote the account of the witch trials during the 1950s Red Scare. It won a Tony Award, became one of the foundational works of American drama, and resulted in an investigation of Miller by the McCarthy-era Committee on Un-American Activities.

Salem embraces the history, in ways both serious and playful. Multiple officials acts have exonerated the victims, and memorials now stand throughout the region. The high school sports teams are called the Witches, and tourism booms.

An Oregon town by the name is nearly as well known.

North Carolina’s Winston-Salem made its reputation on tobacco. Menthol cigarettes called Salem were marketed for many years.

Will this give parents pause? Maybe. But as cigarettes disappear from mainstream advertising, it seems like less of a consideration.

Of course, this might also be viewed as an alternate spelling of the Arabic masculine name Salim.

Salim is pronounced differently, with a short ‘a’ and long ‘e’ sound.

Like the place name, it comes from the same roots as the word shalom.

Hebrew speakers use shalom as a greeting, meaning peace. It ultimately comes from a word meaning complete, or in good health. The Arabic salaam carries the same meaning.

Given names Absalom and Solomon also share the same roots.

Besides the witch trials, there’s a second bewitching association you might make with the name.

Comic strip-turned-90s sitcom Sabrina the Teenage Witch gave us a cat by the name. Sabrina’s cat started out as a witch intent on taking over the world and ended as a reluctant houseguest of the Spellman family.

Salem: By the Numbers

The name saw sparing use for boys in the early twentieth century, perhaps thanks to the Arabic name, or use as a surname.

By the 1970s, it charted in small numbers for girls. That might reflect the soap opera Days of Our Lives. Debuting in 1965, Days takes place in a fictional town by the name.

Since then, it has quietly gained in use. I first heard it mentioned in 2004; 110 children were named Salem that year, split between boys and girls.

As of 2015, 162 girls and 139 boys were given the name. It follows other place names, like Brooklyn and London, into wider use.

It’s tough to pin down Salem. The witchcraft trials make this name edgy, but the meaning is appealing, and our affection for place names is clear.

Do you think Salem works as a child’s name? Is it better for a boy or a girl?