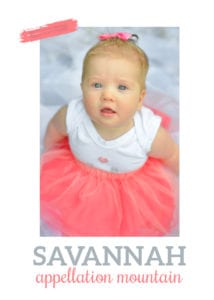 The baby name Savannah caught on ages before we embraced London and Brooklyn.

Thanks to Michelle for suggesting our Baby Name of the Day.

There’s more than one city called Savannah, but Georgia’s might be the most famous.

Founded in 1733, the very first city established in Georgia, it played a pivotal role in both the American Revolution and the Civil War. A major historic district draws tourists; the city features large in popular culture, too.

The name’s origins are debated. Theories include:

In any case, the Savannah River and the city on its shores has made the name famous.

We tend to think of place names as modern innovations.

But over those forty years, over 1800 girls were named Savannah. It didn’t stop there, either. But other names gained in popularity, pushing Savannah out of the rankings, and towards obscurity, by the end of the 1920s.

Was it just Savannah? Not really. Place names like Florida appeared in the rankings, too. And Savannah, with that -anna ending, just sounds like a given name.

Vanessa and Samantha appeared in the Top 100, so maybe it was a case of similar enough sounds.

Savannah Bentley played a steady number of small television roles in the 1970s, so maybe that explains the gain.

But then came 1982 movie Savannah Smiles, and the baby name Savannah skyrocketed.

Starring child actor Bridgette Andersen, Savannah Smiles introduced us to the young daughter of two crazy-busy parents. So much so that they leave their daughter to eat her birthday cake with the housekeeper. Savannah conspires to run away, and ends up in the company of a pair of petty but kind-hearted criminals. All ends well – the criminals do the right thing, and the parents resolve to do better.

Terry McMillan also used the name for a character, in 1992 novel Waiting to Exhale. When it was adapted for the big screen in 1995, Savannah was played by Whitney Houston. If you don’t remember your mid-90s pop culture, that’s peak Whitney.

Aaron Spelling created a series for The WB in 1996, set in the city and titled Savannah. But the women at the heart of the drama were called Lane, Peyton, and Reese.

Jimmy Buffet named his daughter Savannah way back in 1971 – a trailblazer. The father-daughter duo collaborated on a child’s book in 1988. It’s just one more place parents might have spotted the name.

There’s one more 90s reference. Shannon Wilsey became an adult film star so notorious that it was tough to not know her name. She dated rock stars, had a few more minor roles in mainstream movies, and, following her tragic death, was profiled on E!’s True Hollywood Story. But it’s clearly not the reason for the name’s popularity; in fact, Wilsey often said that she took her stage name from Savannah Smiles, too.

From a (mostly) forgotten movie, Savannah has traveled right into the mainstream of American naming.

Savannah Guthrie – born in the 1970s when the name was still very rare – established it as a capable name for an adult when she joined NBC News in 2007. She’s now a household name as a co-anchor of Today.

Beyond the US, Peter Phillips – grandson to Queen Elizabeth II – and his wife Autumn welcomed daughter Savannah in 2010. That makes this decidedly American favorite at-home in the palaces of England.

Overall, the baby name Savannah appeals to parents after something tremendously pretty. It feels unconventional and fresh, but is nicely familiar, too.

If you’re after something Southern, summery, and popular without being too wildly common, Savannah might suit.

Would you consider the baby name Savannah for a daughter? 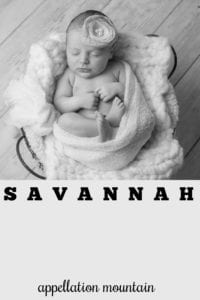