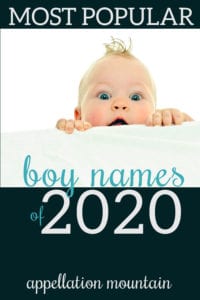 The top boy names 2020 at Appellation Mountain look nothing like the chart-toppers elsewhere.

These are the Name of the Day posts most-viewed at Appellation Mountain for the year 2020. Some of these were written in the last year or so, but most? Well, they’ve been around.

A common thread? Often these names are little-covered in a conventional baby names database. After all, many of these sit beyond the US Top 1000 – and have always been outside of the official rankings.

But not all. Among the out-there choices are plenty of rising favorites, too. In fact, this list will inspire our March Madness Baby Names contest in early 2021.

Those names definitely tend towards the more mainstream: Nathaniel, Arthur, Archer, Everett, Finn, Theodore, Leo, Rowan, and Arlo have all claimed the title of most popular boy name at Appellation Mountain over the past decade.

So what pushes this particular set of top boy names 2020 up the list?

Some catch readers’ attention because they belong to a famous fictional character. (That’s true for #8, #10, and #20.) Others are starting to generate buzz among name fans … but haven’t quite hit the US Top Ten … yet. And some just plain succeed on their own merits.

A strong and distinctive sound, Boone comes with the perfect meaning: good. Think of the French word bon, or the archaic English term boon, as in boon companion.

Two-parts animal kingdom name, with a healthy dose of Max and Jax’s x-ending style, Fox feels like an obvious choice for any parent who grew up with The X-Files.

It’s like Athena hold the final A. Or maybe Athens, but missing an S. If the meaning and origin are unclear, the sound is appealing.

An Old Testament name with an on-trend sound and an irresistible meaning: happy or blessed.

It feels like a gentle nature name, evoking the height of lazy, hazy summer. But August ultimately comes from a title given to the Roman emperor himself, and carries an appropriately grand meaning: venerable.

A surname name that succeeds thanks to the virtuous True embedded in the sound. Our love of names like Beckett and Emmett helps, too.

Once an out-there choice, Atlas has gone mainstream with so many mythological names. But it also succeeds because Atlas conjures up a book of maps – perfect for parents intent on raising adventurers.

A fast-rising o-ender of a boy name, Arlo won March Madness Baby Names in 2019. It’s casual, cool, but feels equally right on a child or an adult. I’d call it homepsun.

Is this a wrecking crew, or a rower? Crew balances both the high-energy of the former and the polish of the latter. When designers Chip and Joanna Gaines chose it for baby five, Crew got a serious boost.

Credence sounds at home on Plymouth Rock, but it’s likely the Fantastic Beasts character that put this virtue name on modern parents’ radar. Ezra Miller plays Credence Barebone in the first two installments – and his identity turns out to be a central question.

We love Grayson – and Greyson and Graysen. But somehow just Gray, the soft and steely color name, has been overlooked.

A hopeful nature name, Wells conveys so many positive qualities in a tailored, stylish sound.

The name of a large body of water, as well as CS Lewis’ fictional prince, Caspian feels like a less expected alternative to favorites like Adrian and Julian.

Those are the top boy names 2020. Stand by for the girls’ list next week. Are any of your favorites on this list?