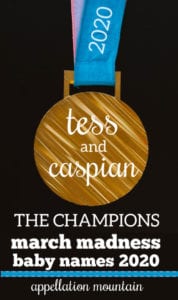 Your votes have been tallied, and the results are in!

Before we get to the big announcement, let’s look at back at our trip so far.

We started with sixteen boy names and sixteen girl names:

If that sounds like an eclectic list, it is! March Madness baby names come from the most popular posts at Appellation Mountain during the prior calendar year. And that looks nothing like any other Top Ten list you’ve seen!

Voting narrowed each contest down to just two finalists: Tess versus Marigold, and Caspian versus Reid.

Marigold had a strong start, but Tess clearly carried the day, winning almost 54% of the total.

On the boys’ side, the contest was much closer. Caspian garnered just over 51% of the vote. But that’s still enough to declare victory.

It feels a little lopsided to me. Many years, the winning names sound like siblings – even twins! But this year, Tess and Reid sound nicely matched. They’re spare and simple, not classic exactly, but certainly traditional. Caspian and Marigold lean fanciful, or maybe dramatic. It’s easy to imagine the same parents picking those two names for siblings.

But then again, we’re not voting to name a sister-brother duo. We’re picking our favorite names from the sixteen contenders. And this year, that distinction goes to Tess and Caspian.

They are the tenth set of names to earn the title, joining:

You’ll note that Cora appears twice. It’s not a typo! After back-to-back victories in 2014/2015, it was decided that past champions were retired from future years’ contests. So we’ll never seen Tess or Caspian in future years’ tournaments. (Runners-up, though, can continue to compete – until they win!)

Their next chance? That will come in March 2021 – just eleven months away!

What do you think of the March Madness baby names victors? Were these your favorites? Would you consider them for a daughter or a son? 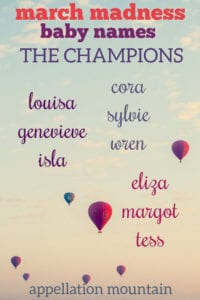