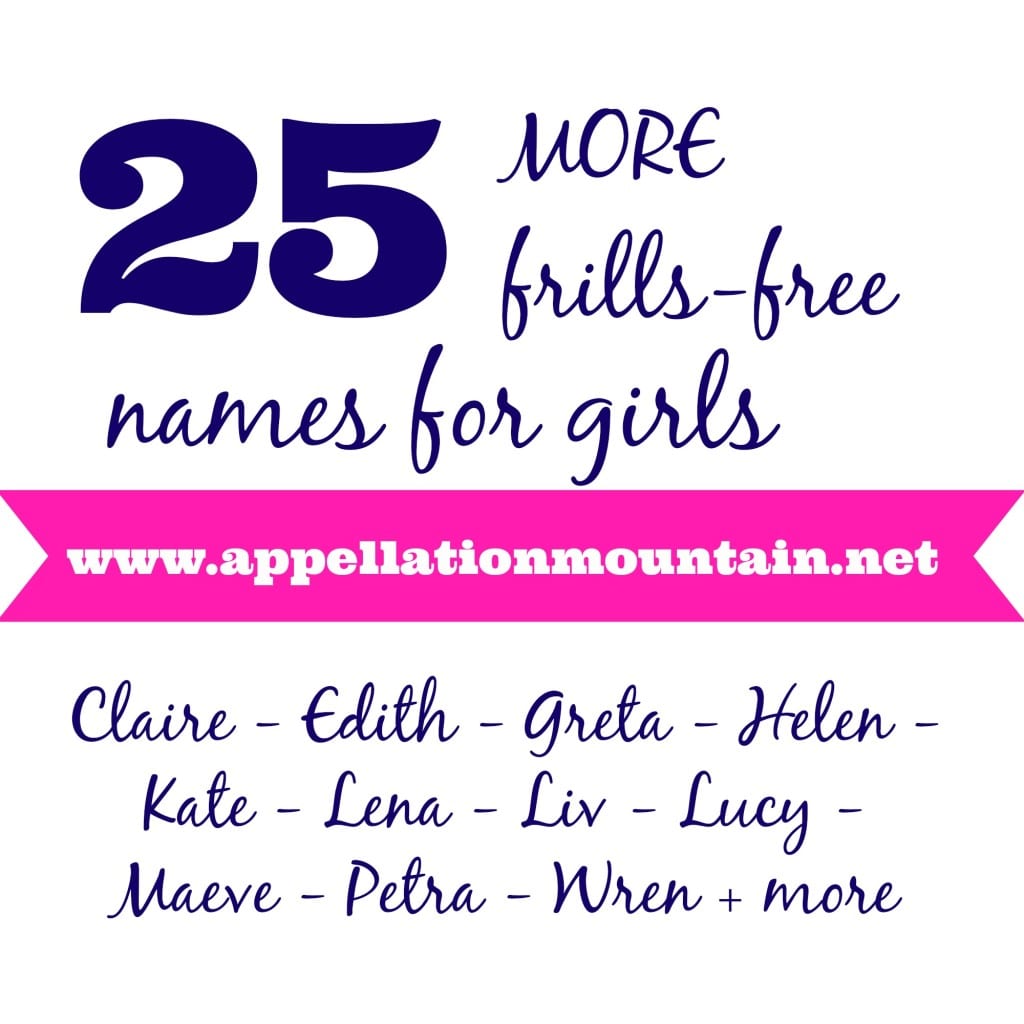 A few of these have spiked in popularity.  And Honor Alba now has a sister called Haven!  But over the years, I’ve used the phrase “frills-free” to describe lots of names.  So I’ve decided to add 25 more frills-free names to the list.

Read on for the additions:

Alice – On my original list, I went with the Gaelic Ailis.  But Alice, with all of her Wonderland associations, is marvelously un-frilly.  She’s an appealing mix of innocence and capability, a name as charming on a child as it is appropriate for an accomplished adult.  Tina Fey helped put Alice back on the map when she gave the name to her daughter in 2005.  She ranked #127 in 2012, and is poised to re-enter the US Top 100.

Amy – She was a smash hit in the 1970s, second only to Jennifer in terms of popularity.  Today, Amy is almost certainly the mom.  But I’ve heard two expectant parents shortlist Amy in recent years, and why not?  She’s one of the Little Women, shares sounds with the popular (and more elaborate) Amelia, and feels like an ancestor of Ava and Zoe.  Respell her Aimee, and you’re back in frilly territory.

Beatrice – She’s regal, literary, and relatively rare.  In 2012, Beatrice ranked #690 – though she’s gained quite a bit in recent years, and will almost certainly continue to climb.  The -x ending Beatrix is even less common.  Both spellings feel serious and capable, classic but still joyful.

Caroline – Caroline is undeniably feminine.  But she’s not really frilly – instead, she’s crisp and tailored.  Yes, she’s a feminine form of Charles, but unlike the slightly more popular Charlotte, Caroline feels like a distinctively different name, harder to trace back to the original.

Claire – This spelling has the tiniest hint of frill – the plainer Clare was once more popular, and remains in use.  The French Claire is less elaborate than Genevieve, with a spare, trim sensibility that doesn’t sacrifice any of her français appeal.

Constance – Virtue names like Grace and Faith could fit on this list, too, but Constance seems particularly serious and stable – a feminine choice with a certain intensity.

Edith – She’s the middle sister in Downton Abbey and the second Crowley name on this list.  The vintage Edith is slowly making a comeback.  She’s deliciously spare, as is nickname Edie.  A more modern option?  Eden.  But with names like Eleanor feeling fresh again, don’t count out the surprisingly lovely Edith.

Greta – Margo made the first edition of this list.  In 2008, I noted that Margaret herself could earn a spot here, too – but I was trying to avoid the most obvious classics.  Like Margo, Greta stands on her own, a familiar name attached to many a memorable figure.  Think Garbo.  Timelessly elegant, and definitely fit for this collection.

Hadley – I’ve been mildly obsessed with Hadley ever since I read The Paris Wife.  She’s as literary as Harper, but not quite as common.  And her status as the first Mrs. Hemingway fills her with all sorts of romance.  I’ve tried to avoid surname names on the frills-free lists, but with so many H names, including the mega-popular Hayley, in vogue, it seems like Hadley reads like a given name.

Helen – Like the letter H, but prefer a more classic approach?  Helen of Troy was a legendary beauty, and even if you skipped the day the Trojan War was covered at school, odds are you recognize Helen as “the face that launched a thousand ships.”  Names from Helen’s heyday – the 1930s – are prime for a comeback, and she’s definitely one to consider.

June – If Jane is courageous, June is gentle.  The month kicks off summer, and the most famous Junes in recent decades have been a member of The Little Einsteins, Beav’s mom in Leave it to Beaver, and Johnny Cash’s beloved wife.

Kate – Many a Kate was born Katherine, a name that would fit on this list, too.  But Kate stands on her own.  The C spelling, as in talented actress (and great baby namer) Cate Blanchett, is just as appealing a choice.  Other notable Hollywoods Kates include Winslet, Hepburn, and Hudson.

Lena – Lately Lena seems like the name of the moment, whether you’re watching Girls or not.  She owes something to Emma, something to Laura and Layla.  Parents seeking a culture-spanning name should almost certainly give Lena a look.

Liv – She could be a short form of Olivia or the up-and-coming Olive, but Liv is also a Scandinavian name meaning life.  Julianne Moore put Liv on our radar in the US, as did the lovely Liv Tyler, daughter of rocker Steven Tyler and a star in her own right.

Lucy – From I Love Lucy to The Peanuts to Lucy in the Sky with Diamonds, there’s always been a Lucy.  She’s nearly as enduring as Mary, and reads almost as classic.  She’s just as frills-free, too.

Mae – A mere three letters, just one syllable, and yet this name feels big.  Maybe it is her bold, bright ay sound, or maybe it is Mae West and the merry, merry month of May.  Regardless, she’s a striking choice that is simple and feminine at once.

Maeve – Take Mae, add a dash of kelly green, and you’ll arrive at this Irish heritage choice.  As if her sound alone wasn’t enough to put her on the list, the legendary Maeve was a warrior queen.

Marlo – Another Margo-inspired choice: the slightly different Marlo.  Spell it Marlow or Marlowe, and this is a surname.  But with just the -o ending, Marlo is more of a mid-century invention.  She’s sparky and different, and definitely sans frills

Nora – Dora is the explorer, and Flora feels lacier, but Nora is name that feels both vintage and modern at once, Nora is having a moment.  She seems poised to return to the US Top 100, where she was in the nineteenth century.  If you’re looking for a name that feels serious and capable, but feminine and charming at once, then Nora is your girl.

Opal – Can a gemstone name be frills-free?  Maybe.  The glittering Emerald or the attention-getting Lazuli don’t make the cut, but understated Opal just might.  Less attention-getting than Diamond, not quite as delicate as Pearl – though that last one might count as frills-free, too.

Petra – Peter is a rock, and Petra is the very rare feminine form.  But with her sharp sound and strong meaning, Petra strikes me as a tailored possibility for a daughter.  Petronella and Pierrette head in another opposite direction.

Skye – Let’s end with some nature names, an outstanding source of possibilities for spare but feminine names.  While Skye’s extra ‘e’ might strike some as frilly, it is also the spelling used for Scotland’s Isle of Skye – and is nearly twice as popular as Sky by herself.  Of course Sky, Skye, and Skyler in a variety of spellings, are slightly more unisex than some parents might like – but again, Skye is far more commonly used for girls.

Wren – One of the bird names attracting quite a bit of attention these days, Wren feels like a great middle or a very wearable given name.  Like Skye, a handful of boys answer to Wren.  But for the most part, Wren makes for a nature name that will please parents attracted to staple names like Jane and Kate.  Wren is simple, straightforward, and completely frills-free.

What are some of your favorite frills-free names for girls?  Would you use any of the names on this list?  Are there more names that should be included here?