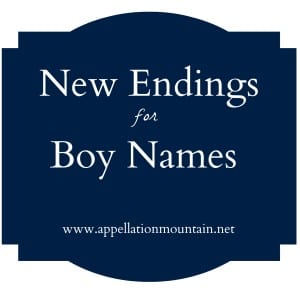 Move over Mason and Ethan.  We do love you, with your strong and confident sounds.  But the Top 100 has so very many two syllable, ends-in-n names for boys, enough that the mainstream press has picked up on the trend.

There are still plenty of great, underused names that fit this category.  I’m a sucker for Soren, and how can it be that Duncan isn’t more popular?  Add in longer names, and there’s Sullivan and Gideon and plenty more, too, all on the rise.

Which endings are possibilities?  I looked at the boys’ names from the Top 500 that had gained more than 10 places in the 2012 rankings and came up with a list of 128 names.  Then I tallied the ending letters – and also considered the names themselves.  Did they seem to represent a trend?

The answer is maybe.  38 of the fastest-rising boys’ names still ended with n, and many of them – Orion, Lincoln, Weston, Hudson, Paxton – are buzzy, interesting names likely to appeal to many.

And yet that’s almost more reason for parents after a standout name might want to choose a different sound.  Here are four possibilities to consider, but be forewarned: some of these names are just as hot as the ends-with-n choices you might be trying to avoid.

17 of the fastest-rising boys’ names in 2012 ended with this letter, and among them are some crowd-pleasers: Jasper, Dexter, River, and Archer are my favorites.

There’s also Theodore, not an obvious add to the list – but definitely a name that ends on the -r sound.

Some of the other entries in this category are respellings – Karter – or hyper-masculine picks, like Ryker.  Gunnar and Gunner both made the list.

Others are imports, like Iker, or seriously daring noun names.  Yes to River, but is Major too much?

Sawyer, Porter, Zander, Tucker, and Hunter rounded out the list.

The take-away?  Ends-with-r names lag behind ends-with-n names, but it is a rich category, one that parents are increasingly exploring.

If there’s competition for the title of new favorite ending letter, then ‘s’ is absolutely a contender.

Some of these seem like clear style stars.  Atticus, Cyrus, Silas, Royce, Elias, Davis, Myles, Jonas, Julius, Rhys, and Lukas are all ahead of the curve in their own ways.

Others had me stumped.  Is Louis an ends-with-s name?  Or are parents pronouncing it the English way, as in Prince George Alexander Louis, whose second middle sounds like Louie?

Speaking of Prince, he made the list, too – more pressure than Major?

I loved seeing Alexis on the list, but was startled when I realized that Bruce and Chris – just Chris – were also fast risers.

And how to think about Jase, Jayce, and Jace?  Clearly he’s a name to watch, as all three spellings rose by ten places or more in 2012.

Another one that stumped me: Cruz.  I created a whole other category for Cruz – ends-with-z, of which he was the only entry.  But was that the right approach?  Hmmm …

Let’s say this: from ancient names to surname borrowings, there’s a lot to like about names ending with s.  Several high profile arrivals have answered to ‘s’ ending names over the past year,  too, from Molly Sims’ Brooks to Tony Romo’s Rivers – a name that combines an ‘r’ ending with a ‘s’ ending, too.

New Endings for Boy Names: a

On numbers alone, ends-with-a names aren’t a huge category.  Just seven of them were on the fastest rising list for 2012.  And one of those names is Jay, which doesn’t quite fit.

There’s also Luca, an import, but one that fits right in with Luke and Lucas and all of the Luc- names so in vogue.

But if you look at the others, there’s a clear thread.  They’re Old Testament names.  Ezra, Jonah, Judah, Zachariah.  Even Messiah, controversial as he may be, isn’t so very far removed from those names.

The take-away?  Names ending in ‘a’ used to be exclusively for girls, but that’s changed in recent decades and doesn’t seem likely to reverse any time soon.

Here’s a category that is heating up: names ending with ‘t’.  The list is packed with rising stars and high profile picks: August, Everett, Beckett, Elliot and Elliott, Barrett, Emmett, Bennett.

Some of those have long histories as given names – others, not so much.  But they all have a certain sound, don’t they?  August and Elliot could be brothers.  So could Emmett and Barrett, or Beckett and Everett.

The names sound smart, capable, and interesting – but they’re also nicely versatile, aren’t they?  I can imagine Beckett as a dentist or a graphic artist, Emmett as a writer or an astronaut.

I think r, s, t, and a are the most interesting endings for boys’ names right now.  But I’d be remiss if I didn’t mention two other letters: o and l.

Eight boys’ names ending in the ‘o’ sound made the fastest rising list: Beau, Romeo, Leo, Mateo, Milo, Gustavo, Orlando, and Marco.  There’s some variation in that group – from Southern gentleman Beau to grandpa Leo to Latino Gustavo to mainstream Mateo and Marco.  Orlando is hopelessly romantic.  Milo is geek chic.  Together, they’re an appealing bunch.

There’s also l – a name that surprised me with its frequency.  Six of the top risers were ‘l’ enders: Gael, Abel, Noel, Khalil, Maxwell, and Leonel.  I really like ‘l’ enders – especially Abel.  But this group feels eclectic, too, possibly more coincidence than trend.

What’s your favorite ending for boys’ names?  Do you think any of these are on the rise?  Are there unexpected choices for each category that you might suggest?