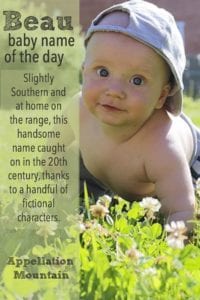 Beau brings to mind an old school fashionista, a gambler with a heart of gold, and a Southern gentleman, too.

And now, today’s Baby Name of the Day also belongs to the youngest child of reality star Tori Spelling.

In English, we’ve used the term to mean boyfriend since the 1700s. Today it seems quaint, even euphemistic, but you may still hear it in use.

That doesn’t seem like promising inspiration for a child’s name, does it?

In fact, this occurred almost exclusively as a nickname for years.

You might think of Beau Brummell, England’s original dandy and arbiter of men’s fashion in the eighteenth century. He was born just plain George.

Despite long and prominent use as a nickname, some men really were born with the name.

In Gone With the Wind, Ashley and Melanie’s son answered to the name, inspired by Confederate General Pierre Beauregard. The character also inspired the Bridges family to give Lloyd III his memorable nickname.

In fact, the movie deserves credit for putting this name into use. Up until the the bestselling 1936 novel and blockbuster 1939 movie, it barely registered in the US Social Security data. By the 1940s, it appears in sparing, but steady, use.

It lends the name a certain Southern gentleman vibe, but that doesn’t explain how it fully transitioned from nickname to established given name.

Instead, Maverick, a television Western about a family of gamblers, caused the name to enter the mainstream at last.

The show debuted in 1957. Brothers Bret and Bart starred in the early seasons. In 1960, Roger Moore joined the series as cousin Beau, and eventually a third brother, Brent, was introduced.

Moore’s character bumped the name’s use up to a few dozen boys a year. It also transformed the name from French and foppish to at home on the range.

Then along came another small screen character: Days of Our Lives’ Bo Brady.

Like many a soap opera character, Brady has been a little bit of everything, from motorcycle-riding bad boy to upstanding police commissioner. His full name is Beauregard Aurelius, but he’s always answered to just the two-letter Bo.

The 1980s also gave us Vincent Edward Jackson, better known as Bo, one of the few professional athletes to succeed in both the NFL and major league baseball. Jackson teamed up with another famous Bo – musician and Rock and Roll Hall of Famer Diddley – to promote his signature shoe in a Nike campaign. Diddley, incidentally, was born Ellas.

And, of course, there’s also Bo Derek, born Mary Cathleen Collins. There’s the tiniest uptick in the name’s use for girls in the same era, too.

Beau: By the Numbers

All of this explains why the name rose steadily through the 1980s, fueled by a combination of athletes like Jackson and actors like Bridges.

Partly we like our cowboy names, like Wyatt and Luke. And Bodhi, Bowen and similar-sounding names are all on the rise.

But maybe this just comes down to sound. Beau feels fresh, upbeat, and unexpected without being invented, masculine without crossing into aggressive.

Reality television star Tori Spelling has a knack for choosing the new It Names. Her children with husband Dean McDermott include Liam, Stella, Hattie, and Finn.

Since the couple just welcomed son Beau Dean in May of 2017, that might be a sign that this name is headed even higher on the popularity charts.

Do you like this name better spelled with an -eau or an -o? Would you choose a formal name, or do you like it best on its own?

Originally published on March 31, 2010, this post was revised substantially and republished on December 7, 2017.