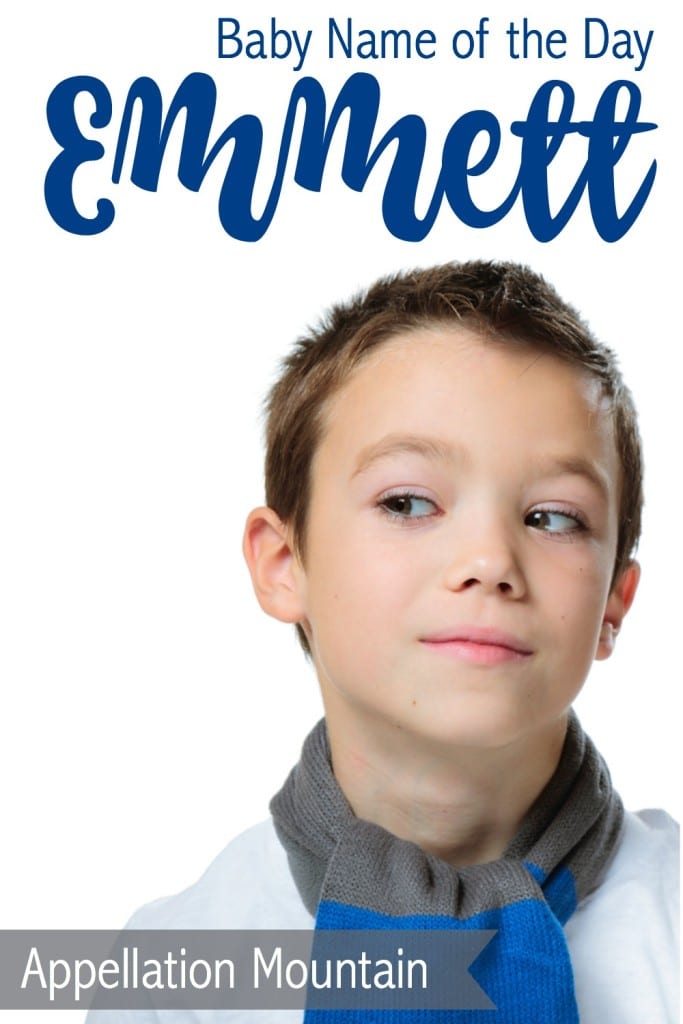 Emmett is strong and sincere, an old school name that feels fresh and interesting today.

Thanks to Jess for suggesting our Baby Name of the Day.

Some sources connect Emmett to the same Hebrew roots as Emmanuel, but this name is really a cousin to Emma.

Emma ultimately comes from ermen – universal. It was long used in names like Ermintrude and is also the source of Irma.

Emma, of course, came from France to England with the Normans. Emma of Normandy married Aethelred the Unready, and became Queen of England in 1002.

Emmett developed as an affectionate nickname for Emma. The Dictionary of Medieval Names from European Sources lists Emot, Emmot, and several other spellings. The surname developed from all of those -ot and -et forms.

Emmett: One T or Two?

Both spellings have been around for years.

In terms of pure numbers, the ‘tt’ spelling has consistently been more popular. It’s one used by famous clown Kelly, outlaw Dalton, and Doc, from the Back to the Future movies. Emmett remains significantly more popular today, too. It was given to more than 2,600 newborns in 2014, versus just 218 newborn Emmetts.

Kids in 2016 will have a completely different association for this name: Emmet Brickowski, the hero of The LEGO Movie. The 2014 blockbuster will get a sequel in 2018. Emmet is an everyman character who has a series of unlikely adventures and saves the day – predictable, maybe, but still charming.

Emmett: By the Numbers

While some parents hesitate to use baby names from Twilight, Emmett rose sharply in use after the first movie was released in 2008. Likewise, The LEGO Movie boosted the single-t spelling of this name. With another LEGO flick in the works, and the ongoing popularity of ends with -t surname names for boys, Emmett feels unstoppable.

Would you spell this name with one t or two?