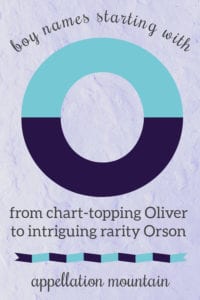 Boy names starting with O are riding high, with Oliver at the heights of popularity, and Owen not too far behind.

But a surprising number of rare O names for boys exist, too. Surnames like Orson and Ogden, imports like Octavio and Oleg, and mythological names from multiple traditions also begin with this bright and energetic letter.

O ranks 17th out of the 26 letters of the alphabet in terms of popularity, putting it well behind A and E, but ahead of I and U.

Of course, it might be Oliver that fuels some of that rank. A staggering 13,891 boys received the name in 2019. It’s wildly popular elsewhere in the English-speaking world, as well as throughout Europe, ranking in the Top 50 – or better – from Sweden to Hungary to Spain, to name just a few.

But O names for boys remain far less popular than boy names starting with A, while retaining much of the same appeal of a vibrant, vowel-forward choice.

A chart-topping favorite across much of the world, Oliver feels traditional, if not quite classic. It’s a playful name, but a sophisticated one, too. With Germanic roots and plenty of historical notables, Oliver is rooted in the past – but has never been more popular.

A Welsh name – and sometimes Irish, too – Owen has become a go-to for parents in our era of boy names ending with n.

Borrowed from Irish myth, Oscar blends a literary vibe (Wilde) with all the innocence of Sesame Street.

Most familiar as an Arabic name, Omar means flourishing. It appears in the Old Testament, too, a Hebrew name meaning speaker.

The constellation of a mythological hunter, Orion is familiar to all stargazers.

Another mythological possibility, we all know the Norse god Odin – father of Thor – thanks to the Avengers movies.

A palindrome name, Otto has been worn by a handful of famous Germans. It feels traditional-ish, but also quirky-cool in the US today.

A nature name every bit as wearable as River.

A Scandi import, cousin to Olaf – and likely a little more accessible for Americans.

Likely a Swahili spin on Omar, though other origins are possible.

A gemstone found all over the world, Onyx is associated with its typical inky-black color.

A Florida place name, borrowed from poets of the Italian Renaissance, as well as Shakespeare’s As You Like It.

The Egyptian god of the underworld, a name at least as wearable as many other mythological gems.

A buttoned-up version of Otto, originally in use as a surname.

A surname name that takes the best of Oakley and Wells.

Another Old Testament name, an alternative to Isaiah and Elijah.

A romance-language take on ancient Octavius.

The much-traveled hero of Greek legend and Homer’s epic.

A place name-turned-surname, American poet Ogden Nash helps put this on the list of first-name possibilities.

The name of a warrior from Irish legend, Oisin means little deer.

A Russian name meaning blessed, Oleg has never caught on in the US.

Ozias is slightly more common than just-Oz, but in our age of Bo, is Oz any less wearable?

What are your favorite boy names beginning with O? 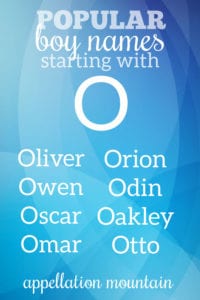 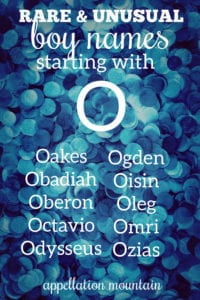