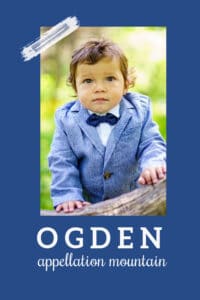 The baby name Ogden is smart, unconventional, and more wearable than you might think.

Thanks to S. for suggesting our Baby Name of the Day.

The meaning of Ogden is straightforward, but it’s not obvious. The Old English ac meant oak. In Old Norse, it’s eik. That makes it a distant cousin to names like the German Eichhorn, also derived from the name for an oak tree.

The second syllable refers to a valley, hence “oak valley.”

More than one such place dotted the English landscape. There’s still one in West Yorkshire today. And Ogdens dot the map across the English-speaking world, too.

In the twenty-first century, the biggest of these is Ogden, Utah. It was named for British-Canadian explorer and fur trader Peter Skene Ogden, as was the nearby river. The explorer’s range was vast – there are Ogdens named in his honor from Nevada and Washington, British Columbia and Oregon.

Like nearly any place name, Ogden was eventually borrowed as a surname.

And famous people with the last name Ogden are plentiful. There’s a ballerina and several judges; athletes and politicians.

Back to real-life people: actor David Ogden Stiers played Major Charles Winchester on long-running television series M*A*S*H. While that’s lost in the past, Stiers later voiced many an animated Disney character, in movies like Lilo & Stitch and Pocahontas, so even if you don’t recognize his name, there’s a good chance you’ve heard his voice.

If the baby name Ogden does ring any bells, though, it might be for literary reasons.

Born Frederic Ogden Nash, the future writer dropped out of Harvard, wrote some advertising copy, worked as an editor, and then sold a few of his early poems to The New Yorker.

Many of his works are gentle, family-friendly, even G-rated. They’re all defined by wit and wordplay.

We often know them without realizing it. Like this one: “The trouble with a kitten is that it eventually becomes a cat.”

While Nash isn’t a household name today, name your son Ogden and chances are that someone will bring up the writer.

At least three more fictional bearers of the name come to mind.

Fans of PG Wodehouse, best known for his Jeeves and Wooster series, might know Ogden Ford from The Little Nugget. The character is decidedly obnoxious, the son of a very wealthy American father. The 1913 comic thriller centers on attempts to kidnap Ogden from his posh boarding school, with his estranged mother one of the players.

And Ready Player One included Ogden Morrow, also known as the Wizard of Og. Simon Pegg played the role in the 2018 movie adaptation.

Let’s talk popularity. Because it’s not clear that Ogden is really in use as a boy’s name.

It turns out that the peak year in terms of births of newborn babies named Ogden was 1917.

Why 1917? Possibly because Ogden L. Mills was a US Senator from New York who resigned his office to serve in the first World War. For Mills, Ogden was a family name, shared with his dad, originally part of their family tree thanks to a great-grandmother’s maiden name.

In any case, usage dropped after that year, and for decades after, a handful of boys received the name annually.

During the 1970s, the numbers dwindled to almost zero.

The answer, then, is yes. The numbers are tiny, but consistent. A baby boy named Ogden is born is pretty much every decade – but it’s easy to imagine that most of us will never meet one.

That’s not a bad thing, of course.

It fits with similar names like Harold and Truett, Wallace and Giles; and English names borrowed from aristocratic families, too, like Clarence or Howard.

Sound-wise, it’s not too different from August, and we love two-syllable, ends-with-n surname names for our sons, like Jackson and Grayson.

While Ogden seems to lack nicknames, it could be Oggie to August’s Augie.

That mix of characteristics – current meaning, buttoned-up sound – could appeal to plenty of parents. It’s a completely unexpected choice, rich with potential.

What do you think of the baby name Ogden? 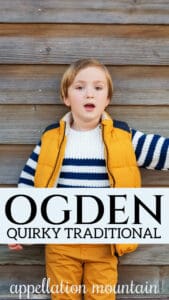 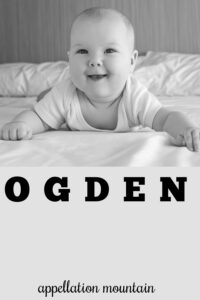