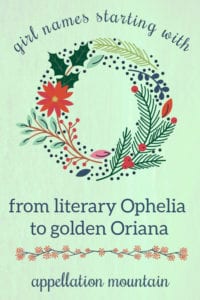 But beyond those few names, the letter O offers a great many options for our daughters. And the letter ranks just 19th out of 26, meaning that unless you’re choosing one of the chart-toppers, most girl names starting with O are nicely rare.

In some cases, these names have lost out to A spellings. (We love Ariana, but why not golden Oriana?) Others have gotten so much buzz – Odette, I’m looking at you – but have yet to translate to parents choosing the name for their children. And there’s at least one on the rare girl names starting with O list that seems poised to enter the popularity rankings any day now.

If you love vowel-forward names, but are trying to avoid the most popular picks, there’s a good chance that girl names starting with O might satisfy.

Shakespeare gave the name to a character in Twelfth Night in 1602. Centuries later, The Waltons chose the name for matriarch Olivia in the 1970s. While it’s always been in use, it’s never been as popular as today. Long and lovely, Olivia entered the US Top Ten in 2001 and continues to hold a spot there, nearly twenty years later.

A spare sister to Olivia, Olive is more nature name than romantic literary pick. Though literature has given Olive a boost – Elizabeth Stout’s celebrated novel Olive Kitteridge debuted in 2008, and was quickly adapted into an Emmy-winning mini series by HBO. Fun fact: Olive is an anagram of “I love.”

At first glance, Oakley came out of nowhere. It debuted in the US Top 1000 in 2013, and cracked the Top 500 by 2017. But it’s actually gained in use slowly over the last twenty years, a mix of new nature-inspired choice and bold surname. One reason it leans girl? Annie Oakley, nineteenth century sharpshooter.

An ancient name, Octavia followed Olivia up the charts. But it caught on in a big way after post-apocalyptic television series The 100 gave the name to a warrior. And why not? It’s a commanding sound with the auspicious meaning eight – considered a lucky number in some cultures.

Another long and lovely O name with roots in Shakespeare, Ophelia’s rise is almost certainly tied to the runaway popularity of Olivia. But it also benefited from a handful of pop culture uses, including The Lumineers’ 2016 single.

Another take on Oak names, and not the last one on this list.

A gemstone name that’s a little more homespun than flashy Emerald or Ruby, Opal ranked in the US Top 100 back in the early 1900s and 1910s. The hundred-year rule means that Opal should be ready for revival right about now. And, sure enough, Opal returned to the US Top 1000 in 2017.

Straight-up word name Ocean follows choices like River and Bay. But Océane really should be spelled with an accent to emphasize the pronunciation: oh say AHN. The latter had a good run in the French-speaking world in the 90s. But Americans are all about fresh nature names today, suggesting that either of these choices might wear well.

A major city in the Ukraine, but also a Texas town, Odessa comes from Odysseus, the hero of ancient tales who traveled so far. If this seems like a wild attempt to find the next Savannah or Brooklyn, it’s not. Odessa ranked in the US Top 1000 every year from 1880 into the 1950s. It’s a straight-up vintage revival with mythological roots and a modern sound.

If you know your Swan Lake – or your Black Swan – you’ll recognize Odette as a princess, transformed into a bird by an evil sorcerer. Tchaikovsky’s ballet flopped on its 1877 debut in Moscow. But it’s since become one of the most popular ballets of all-time. For a few years, Odette topped all the lists of hipster baby names. While it did rise modestly in use, it never joined Scarlett in the Top 100.

While we’re talking swans, Odile is the daughter of the evil sorcerer in Swan Lake. Sometimes one dancer takes both parts; at other times, they’re cast separately. Odile is far less common for children born in the US, but that seems just right for a black swan, doesn’t it?

It seems like an elaboration of Olive, a spin on Olivia. Except it’s actual the name of a mineral, named for its olive-green color.

A name from Welsh legend, tailored and unexpected.

Immortalized by Puff the Magic Dragon, Onnalee – or Onnolee or Honalee – has never hit the mainstream, but it’s an intriguing choice that fits right in with compound names like Oaklynn.

First there was Serena Williams. Then Usain Bolt. With legendary athletes choosing the name for their daughters, Olympia feels like it could be the next big thing. It refers to the highest mountain in Greece, the legendary home of the gods. While it’s always been rare, it seems promising in our age of Olivia and Ophelia.

Golden Oriana sounds almost exactly like the chart-topping Ariana, only it features in medieval legend, rather than Greek myth. Oriana comes from the Latin aurum, so it literally means golden.

An Irish import, Orla means golden princess. Designer Orla Kiely makes raised the name’s profile in the US, at least a little. It’s short, accessible, and yet quite rare.

Spell it Orli, and it’s a Hebrew name meaning “light for me.” But Orly is a village outside of Paris, named for Emperor Aurelius. That connects Orly to the word for gold, too. The village is known for Orly Airport, the main airport serving Paris until the 1970s opening of Charles De Gaulle.

British parents love Ottilie, but Americans have yet to embrace this appealing name. Maybe it’s because Ottilie can sound a little like Odd-a-lee in American English. But this name is rich with potential, just like Elodie, Coralie, and other neglected possibilities.

What are your favorite girl names starting with O? Would you consider any of the names on this list? 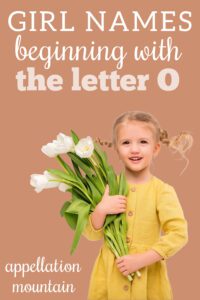 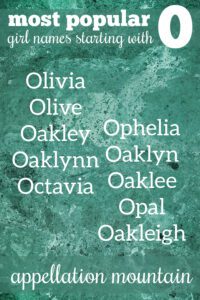 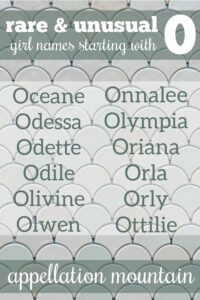