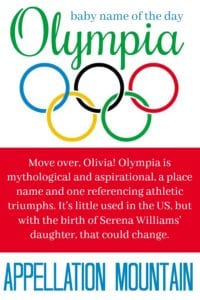 Olympia sounds so much like chart-topper Olivia, and brings to mind feats of athletic achievement. Could it be the perfect stands-out/fits-in name for a daughter?

We’re looking at the Best Celebrity Baby Names of 2017 with today’s Baby Name of the Day – daughter of tennis star Serena Williams.

In Greek myth, Mount Olympus was home to the gods. It’s a real mountain, the highest in Greece, standing on the border between Thessaly and Macedonia. Zeus, they say, threw his thunderbolts from the mountain’s peak.

The exact origins and meaning of the name Olympus are lost, but the cultural associations remain powerful.

The mountain has inspired given names for millennia. History gives us Olympias in the fourth century BC. Born a princess, she married a king, Philip II of Macedon. If that name sounds familiar it’s because the royal couple’s son is remembered as Alexander the Great.

It wasn’t her birth name, though. She adopted it after her husband triumphed in the Olympic Games of 356 BC. Philip won the horse race, and defended his title in the chariot races. Alexander was born around the same time. Until then, she was known as Myrtale.

The ancient world also gives us two musicians, both known as Olympos. The older figure probably belongs to myth and legend, but the younger musician truly did live – and compose – maybe around 600 BC.

Olympia: On the Map

The state of Washington’s capital bears the name, thanks to the nearby Olympic Mountains. The mountain range’s name was inspired, of course, by the Greek peak.

A few other cities in the US and internationally bear the name.

But interestingly, this name is used widely for buildings and sports venues. The Detroit Red Wings played in Olympia Stadium from the 1920s through the 1970s. A Paris music hall has worn the name since 1893; Edith Piaf performed there often in the 1950s. Theaters and halls and arenas were one found – or still stand – in London, Sydney, New York, Berlin, and Atlanta, to name just a few.

But the most famous Olympia is found in Greece. From the 8th century BC to the 4th century AD, the Olympic games were held there every four years. There were temples to the gods, as well as a hippodrome and other sporting facilities. One of the Seven Wonders of the Ancient World, the Statue of Zeus, was erected there in the 400s BC.

Those Olympics mixed athletics with religious observances. Some sports, like chariot racing, don’t exist in the modern games. But many – like wrestling and foot races – remain part of the modern Games.

Speaking of the modern Games, revivals started as early as the 1700s. But the 1896 Athens Games are generally considered the beginning of the Olympics as we know them today. It was titled the I Olympiad.

We’re up to the XXIII Olympic Winter Games as of February 2018, with the Games of the XXXII Olympiad coming to Tokyo in 2020. All the world over, the word is recognized.

Much like Mount Olympus suggested lofty heights, the games are about excellence and achievement.

She won her most recent Grand Slam title at the Australian Open while pregnant with her first child.

She’s named for dad, of course. But also for mom’s achievements. They’re calling their daughter by her middle.

Olympia: By the Numbers

Up until the Williams-Ohanian birth announcement, this name barely registered a blip in the US.

Some might know Edouard Manet’s famous painting Olympia. Once considered scandalous, the famous nude hangs in Paris’ Musée d’Orsay. (The source of the brouhaha? The model’s defiant gaze. Oh, and the fact that Manet painted not a goddess, but a prostitute.) But that was 1863. Today it seems almost tame.

In 1980, One Life to Live gave us a character by the name. She was the first Mrs. Buchanan on the series. The following year, the name spiked in use – and could have caught on. Except the character died on screen after shooting her ex-husband (hello, soap opera!) and did not return, except for a flashback in 2008.

Actor Olympia Dukakis won an Academy Award for her supporting role in 1987’s Moonstruck. But it failed to inspire parents – the numbers

But in 2016, 51 girls were given the name. That’s the highest number since the soap opera character’s dramatic demise.

Overall, there are plenty of reasons to consider this name. It’s a choice that fits perfectly with current trends, while remaining rare. With -ia names for girls like Mia and Sophia dominating the girls’ Top Ten, the sound

Serena Williams’ daughter raises the name’s profile, and reminds us that Olympia makes for a golden name, one that symbolizes achievement.