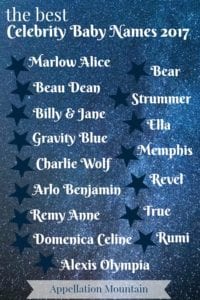 Every year I struggle: is best the right word? Not exactly. In some cases, the names truly do stand out, and I fully expect parents to take notice. Sometimes, the names make the list for other reasons. They’re likely to set trends or keep us talking. And every so often, they’re names that only work if you’re as beautiful and privileged as these celebrity parents.

The awards change every year. We’ve had Best Mythological Moniker and the Keep It Simple, Sweetie Award. To read all of my celebrity superlatives, check out these posts: 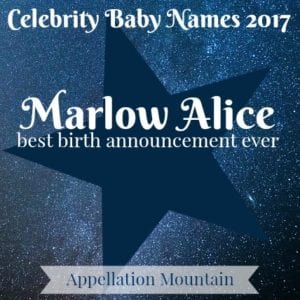 We knew – or at least we were pretty darn sure – that Amber Tamblyn and David Cross didn’t really name their daughter Dauphinoise Petunia Brittany Scheherazade Von Funkinstein Mustard Witch RBG Cross Tamblyn-Bey Jr. But the birth announcement still wins 2017. Even better? Not only does the actor-author-director have a great sense of humor, she’s a stellar namer, too. Amber later shared that her daughter’s real name is Marlow Alice, which is all kinds of fabulous. 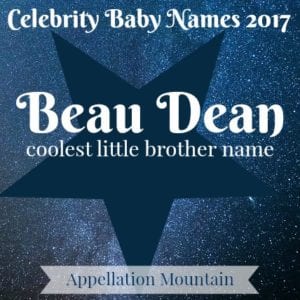 Reality star Tori Spelling has a knack for naming. She and husband Dean McDermott have five children: Liam, Stella, Hattie, and Finn. New baby Beau arrived earlier this year. Dean is also dad to son Jack. The couple tends to choose names that are already on the upswing, and continue to climb after their children arrive. Maybe it’s because the famous family keeps the names in the spotlight – or maybe it’s because they’re just such great names. 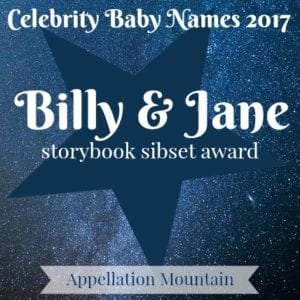 Jimmy Kimmel’s newborn son Billy underwent not two heart surgeries in his first seven months of life. He’s doing great! But let’s talk about his name for a minute. Jimmy and wife Molly sound like the friendliest of next-door-neighbors. So does their daughter, Jane. And now Billy? It’s like they’re the family from a 1950s reader. Some names are great, and some are even more amazing together. Here’s wishing this storybook family a very happy ending.

I’ve yet to write about Billy, but read about William here. 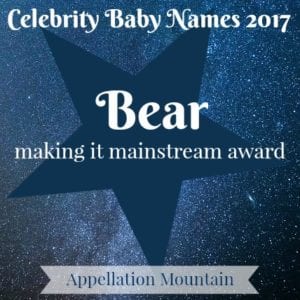 When Alicia Silverstone chose it, Bear seemed destined for the crazy celebrity baby names list. But then Kate Winslet welcomed her son Bear. Jamie Oliver and Anthony Kiedis both chose it as a middle. And in 2017, Liam Payne and Cheryl Cole gave the name to their son. Somehow, the singer tipped it from outlandish to just-on-the-verge of mainstream. After all, Fox has recently entered the US Top 1000, and nature names feel like an unstoppable force. 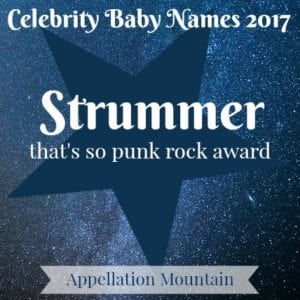 We love rock ‘n’ roll surname names, and we’re all about boy names ending with -r. So isn’t a surprise that Strummer hasn’t been heard sooner? Julia Stiles’ new son shares his name with legendary Clash frontman Joe Strummer, earning this baby name the That’s So Punk Rock Award. It’s a brother for Bowie, a cool boy name that’s not as edgy as Stryker or Blaze. Also known as an activist and innovator, there’s lots of reasons to consider Strummer a hero name just waiting to happen. 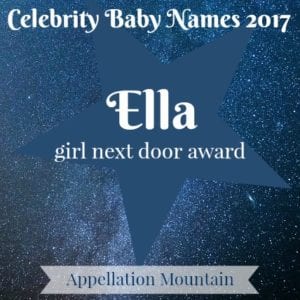 What would George and Amal Clooney name their boy-girl twins? It was quite the question this summer. The power couple went for a Girl Next Door name for daughter Ella, keeping it short and simple. Her brother, Alexander, has a Boy Next Door name, too – but traditional picks aren’t quite as surprising for boys. (Even though that’s changing.) Proof that celebrities are just like us? Or does it simply reflect the couple’s classic style? Probably a little bit of both. 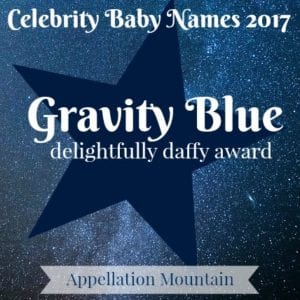 Model-musician Lucky Blue Smith comes from a family with daring names. His sisters are Pyper America, Starlie Cheyenne, and Daisy Clementine. Now Lucky is a dad. He and model girlfriend Stormi Bree named their new daughter Gravity Blue. It’s a little bit daffy, but also kind of delightful, a name that makes complete sense on their family tree of creative, unconventional choices. Gravity may be the anti-Ella, but it works every bit as well. 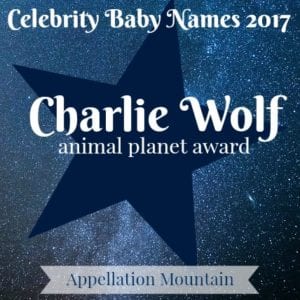 When Zooey Deschanel named her firstborn Elsie Otter, I gave it the Animal Planet Award – especially because the new mom talked about how much she loved the animals that inspired her daughter’s middle. Zooey and husband Jacob Pechenik kept the theme going with son Charlie Wolf, born in May. No word yet on whether Wolf is based on affection for the animals, or if another influence is at work, but it makes for a great name. 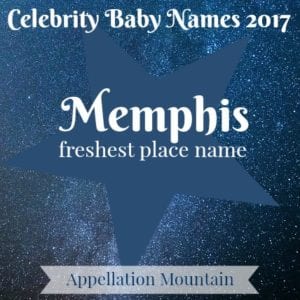 Jason Aldean and wife Brittany are not the first celebs to choose the name Memphis. Bono’s daughter answers to the name, too. But the country music couple recently welcomed their first child together, son Memphis. It’s a fitting name for a musician’s son, and a fresh place name possibility to consider. In our age of Brooklyn and London, Memphis sounds just right.

I’ve yet to write about Memphis, but check back and I’ll update when I do. 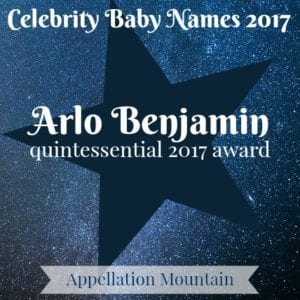 Some celebrity baby names stand out because they’re so wild; others, because they’re mild. But Arlo Benjamin is neither – it’s simply a quintessential 2017 baby name. Sons of Anarchy alum Theo Rossi and wife Meghan gave this name to their second son back in July. (Big brother is Kane Alexander – another good example!) Blending a rising modern favorite first with a trending classic middle makes for a great combination, the kind that many parents are trying to find. 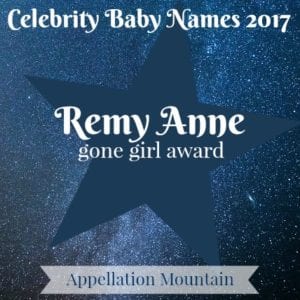 This name claims traditionally masculine roots, but Remy ranks in both the boys’ and the girls’ Top 1000. That’s likely to accelerate, especially with high profile parents like Billy Joel choosing the name for their daughters. Joel is dad to Alexa, born in 1985, plus daughters Della and now Remy with new wife Alexis. We love those unisex R names, and Remy feels just a little bit different in our age of Riley and Rowan. Remy has gone girl – though it still wears handsomely for a son. 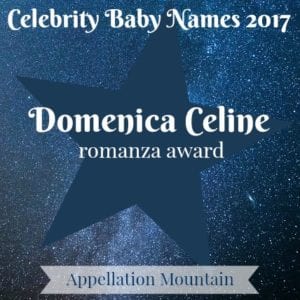 For every Remy, there’s a Domenica. Romanza names are elaborate, dramatic, and undeniably romantic. Domenica Celine joins past award winner Philomena Bijou and brother Jovan, Jr., the children of television personality Daphne Oz and husband Jovan Jovanovic. While Dominic is quite popular for boys, none of the feminine forms of the name are common, including the Italian Domenic. Still, it’s easy to imagine Domenica fitting it with Isabella and Victoria.

I’ve yet to write about Domenica, but check back and I’ll update when I do. 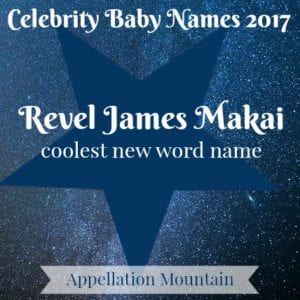 Upbeat and edgy, Revel celebrates parenthood. That’s why Glee alum Matthew Morrison gave the name to his first child with wife Renee. His full name is Revel James Makai, a mix of the modern and the traditional. Like Remy, it’s easy to imagine this name on a boy or a girl. And while it’s got a cool sound, Revel doesn’t quite reach the bad boy status of Rowdy or Rogue. While it’s clearly a noun, it isn’t often heard in everyday speech, making it even more wearable. 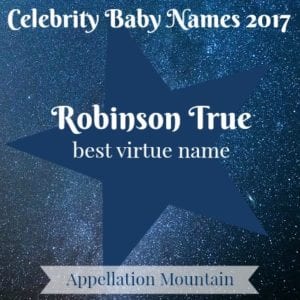 Sportscaster Samantha Ponder is a fearless namer. Daughter Bowden Sainte-Claire was named for dad’s football coach, and answers to Scout. Now son Robinson True has arrived. One of the inspirations for Robinson? Legendary baseball player Jackie. But their new arrival goes by just True, and it’s a virtue name that really works. Brief, complete, and universally understood as an admirable quality, True sounds modern and name-like, but rich with meaning, too. 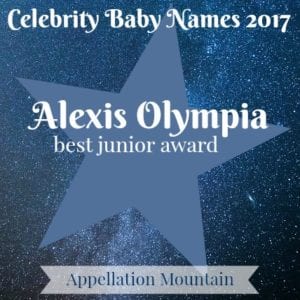 Some will protest that Alexis Olympia Ohanian isn’t exactly a junior, and I get it. But there are no hard and fast rules when it comes to family naming, and traditions? They’re meant to be reinvented every now and again. So I think it is spectacular that tennis superstar Serena Williams and husband Alexis Ohanian named their daughter after dad. They’re calling her by her middle, but that’s almost a family name, too – after all, mom is a four-time Olympic gold medalist.

Read more about Alexis here, and check back for a post about Olympia!

Celebrity Baby Names 2017: Most Influential Name of the Year 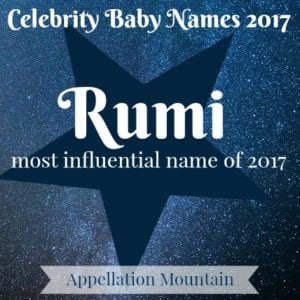 Beyonce’s baby girl Rumi takes home the prize for Most Influential Name of 2017. It’s a unisex R name like Remy, River, and Rowan, and a cross-cultural choice with ties to Japan and a thirteenth century Persian poet. Rumi the writer remains widely read today, making this name literary, too. Sound-wise, it brings to mind Lucy and Blue and Luna and so many ‘oo’ baby names. It’s fresh, distinctive, stylish, but with deep and intriguing roots. Just as plenty of Jane Austen fans named their daughters Emma, I can imagine Rumi inspiring the same. As for Rumi’s twin brother, Sir does make for an interesting choice, and one that feels very fitting for the child of Beyonce and Jay-Z. But the prize for Most Influential clearly goes to Blue Ivy’s baby sister.

What were your favorite celebrity baby names 2017? Any that I missed?