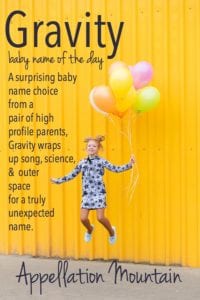 Gravity took us all by surprise when a pair of model parents picked it for their new daughter last month.

Our Baby Name of the Day was inspired by Lucky Blue Smith and Stormi Bree’s firstborn.

The word comes from the Latin gravitas, meaning heavy. We’ve been using it to mean dignity or importance since at least the sixteenth century. Think of phrases like “the gravity of the situation.”

Not longer after, the word traveled from English class to the science lab.

You might think of Sir Isaac Newton, sitting under a tree when an apple fell on his head. The mathematician and physicist does get credit for discovering the natural phenomenon, but the story might be pure legend.

What we do know is that Newton described the force, and recognized that it applied to celestial objects as well as apples and such. It keeps the moon in its orbit.

That barely scratches the surface of this weighty scientific topic. Astronomers used it to predict the existence of celestial objects like Neptune, and Einstein had quite a bit to say about it, too.

Beyond all the observations and theories, there’s a romantic notion. Gravity describes the force of attraction between two objects, like the Earth and the Moon. It holds together the entire solar system. That makes this name quite powerful.

Gravity: Out of This World

It also helps Gravity fit – at least a little bit – with night sky names like Stella and Luna.

As if a romantic-scientific name with ties to the night sky wasn’t appealing enough, there’s a hit song.

Gregory Maguire penned Wicked: The Life and Times of the Wicked Witch of the West back in 1995. It became a smash hit Broadway show in 2003. The prequel explained how Elphaba – future Wicked Witch – transformed into the villain we know.

Elphaba famously sings “Defying Gravity,” the show’s signature song, at the end of the first act. (On the off chance you’ve never seen it, watch it here!) The song serves as a declaration of personal freedom. “It’s time to trust my instincts, close my eyes and leap,” she sings.

Of course, other pop culture references come to mind. In 2013, Sandra Bullock and George Clooney starred in a movie titled Gravity, about two astronauts in desperate circumstances. Alfonso Cuarón won the Best Director Academy Award for the film.

Make no mistake: we’re only talking about this word-name because it appeared on a high profile birth certificate.

Lucky Blue Smith comes from a talented family of model-musicians. Along with sisters Pyper America, Starlie Cheyenne, and Daisy Clementine, baby brother Lucky Blue forms surf-rock band The Atomics. You might have spotted them as part of the H&M Loves Coachella campaign.

Welcome to the world little angel, the most perfect beautiful gift I could have ever dreamed of 🖤little miss Gravity Blue Smith

Gravity: By the Numbers

Until that moment, Gravity simply failed to make the lists of names. It has never appeared in the official Social Security Administration birth records, making it rare indeed. (That indicates that it’s never been given to even five boys or girls in a single year.)

A few appear in US Census records, male and female alike. I counted just four. One of the female bearers of the name seemed to go by “Gracy” for short.

Overall, Gravity remains barely a name. Many will dismiss it as an outlandish, attention-seeking choice. And yet, plenty of mainstream favorites were once unknown: think of Destiny before the 1950s, River in the 1960s, or Cadence until the 1970s.

With three-syllable, ends-in-y names for girls always in favor, Gravity fits surprisingly well with Avery and Kennedy, Harmony and Trinity.

What do you think: wacky celebrity baby name? Or the next big thing?