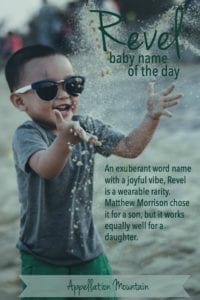 Revel makes a new entry on the list of possible word names with a cool sound and an upbeat meaning.

Revel counts as a noun and a verb.

From the 1300s onward, it meant to make merry. We’re not talking Netflix and chill merry. Think rowdy, even riotous crowds – a mosh pit, not a waltz. But still a very good time.

Sometimes it’s plural, but either can feel right as a word. If you were attending such a party, then you were reveling. It ultimately comes from the Latin word rebellare – the root of our English word rebel.

By the eighteenth century, the meaning started to shift. You could “revel in” your good fortune or some other circumstance. It feels a little more sedate.

Neither word occurs in everyday speech often today, but they’re far from archaic. Instead, they feel like the kind of words you’d hear at a Renaissance Festival – dressed up and distinctive, but still broadly familiar.

Sometimes spelled with double Ls, Revell appears as a surname, too. It was probably given to someone who liked a party or was known for hosting extraordinary feasts. Just like brown hair or tall stature might inspire a surname, so did this tendency.

Doubtless that’s why a small number of children received this as a name over the years, in both the single-L and double-L spellings.

Revel: By the Numbers

While not unknown, this name qualifies as exceedingly rare. In 2012, ten boys were given the name – a new high!

British filmmaker Revel Guest comes from an aristocratic family – Winston Churchill is a cousin. I assume her name was borrowed from a family tree, and there’s at least one eighteenth century ancestor with it as a middle.

Historian and author J. Revell Carr is another.

Neither make for household names, of course. As for fictional characters, again, they’re pretty under-the-radar. It occurs as a surname for a handful of figures, sometimes spelled with an -elle ending.

It mixes the modern and innovative with the traditional and the unexpected.

The couple chose the name for its sound and meaning, noting that they wanted to “revel” in their child. Nickname Rev also appealed.

That’s a concept that might feel right to many parents. A child’s birth is meant to be celebrated. It also works for a child born at the holidays.

Revel: The Next Rowan?

We do like gender-neutral R names. Just ask Rowan, Remy, Rory, or Reese. This name fits right in, a unisex choice that sounds like so many current favorites.

It straddles another trend. It’s less dramatic, and decidedly less bad-boy – than names like Rowdy or Rebel, despite being a cousin to both. I’ve talked about the pressures of living up to a big name like Vandal, but I think Revel falls just inside the wearable category.

While it remains far outside the US Top 1000, expect to meet a few more children with this festive, striking name in the coming years.

Do you like Revel better for a boy or a girl? Do you think it’s too much name, or do you agree that it wears reasonably well?