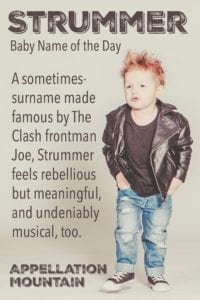 Strummer made headlines as the name of Julia Stiles’ new son.

Our Baby Name of the Day fits right in with Aria, Cadence, and Lyric, plus all of those -r ending boy names, too.

To strum means to play a stringed musical instrument. The word may come from the sound of running your fingers across the strings. It’s first recorded in the 1700s.

Another theory? It might be a portmanteau of thrum – an earlier word with the same meaning – and strings.

Either way, this clearly refers to a musician, one who plays a banjo or a guitar.

While it’s not common as a surname, enough men and women appear in the 1940 US Census to conclude that it’s seen some use.

The most famous bearer of the name adopted it as an adult.

Born John Graham Muller, the son of a globe-trotting diplomat, he became Joe Strummer in the mid-70s. He did play the guitar, and would become legendary as the frontman of The Clash. The band came out of London’s punk scene, but their influence reached far beyond. You’ve almost certainly heard “Should I Stay or Should I Go” and “Rock the Casbah.”

They were inducted into the Rock and Roll Hall of Fame shortly after Strummer’s 2002 death.

He’s also remembered as a passionate activist. A foundation created in his memory supports “empowerment through music.”

Strummer: By the Numbers

Most common surnames appear in use in small numbers over the years. But this one isn’t very common at all – in the first or the last spot.

The US Social Security Administration reports on any name given to at least five children of a single sex in a given year. For Strummer, the first year that happens is 2005.

No question the singer gets credit for the slow rise in use.

In other words, very few parents have even considered this name for their child. The few that have almost certainly have the singer in mind.

And yet, it works even if you’re not a fan of late 70s punk rock.

We love our -r ending names for boys, with choices like Carter and Hunter and Parker solidly established in the current US Top 100.

And we also like a musical name. Aria, Harmony, and Cadence all tend to be used for girls. Others, like Lyric, seem more unisex. This one feels masculine.

Strummer combines the best of both – it’s a rock star surname with a built-in musical term.

Drummer and Trummer – occupational surnames with German roots – were given to musicians who played the drums or the trumpet. While I’ve heard of at least one Drummer, both choices are even more obscure than the very rare Strummer.

As for mummers, the word originally referred to one who disguised himself, and mummers performed in plays from the Middle Ages onwards. Today, the term might lean musical, too, thanks to the annual Mummers Parade of string bands every New Year’s Day in Philadelphia.

Despite all of these compelling reasons to consider the name, Strummer was fading.

No word on why the couple chose the first name, but their baby boy has a family middle – Newcomb. Julia’s mom is Judith Newcomb Stiles, so it appears to be a nod to his grandmother.

Stiles’ unconventional choice might put this name back on parents’ radar. Between the on-trend sound and the connection to a rock legend, there are plenty of reasons to imagine this name wearing well.

Would you consider Strummer for a son?