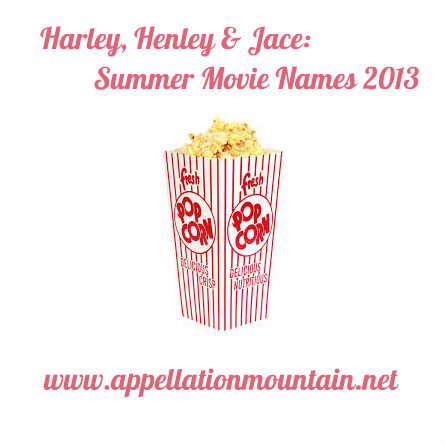 Let’s go to the movies!

With summer underway, there’s no shortage of potential blockbusters on the big screen.  And that means summer movie names.  Familiar names, novel names.  Names that we’ll all be talking about.  And maybe a few names that will make their way on to birth certificates over the next few years.

Foster – Okay, he’s not a leading man.  He’s the little brother in Insidious Chapter 2.  The older brother is Dalton, a surname name that’s been in the US Top 100 in recent years.  Foster re-entered the US Top 1000 in 2012.  He’s got the fashion-forward -r ending, and Foster the People scored a huge hit with “Pumped Up Kicks” two years ago.  I still think of all the animated creatures in Foster’s Home for Imaginary Friends, but that’s a kid-friendly, upbeat reference.

Harley – He’s the adorable sidekick from Iron Man Three, the kid who helps Tony Stark when he’s hit a rough patch.  The name is slightly more popular for girls than boys in recent years.  But I think it works for both genders just fine, and I loved it on the boy in the movie.

Jace – Now that Jason is a dad name, short form Jace is on the rise.  Long a nickname for that popular appellation, Jace can stand on his own, along with Cole, Trace, and Cade.  He’s likely to get a boost from the first installment in a new young adult novel-inspired series of the supernatural variety.  The Mortal Instruments: City of Bones is the first film adaptation from Cassandra Clare’s best-selling series.  The names are downright delicious: Valentine, Hodge, Magnus, and yes, Jace.

Kitai – Not one, but two superstar Smiths are behind the sci fi adventure After Earth.  It’s set 1000 years in the future, give or take.  It’s an opportunity to re-imagine given names, and the movie does just that.  Will plays a character named Cypher, while Jaden is Kitai.  I’m intrigued by Kitai, which sounds something like kee TYE.  A sci fi spin on Ty and Kai?  On another note, I’m hoping the fictional father-son duo’s surname – Raige – does not catch on.

Percy – Percy Jackson is back for the sequel Sea of Monsters.  He’s no Harry Potter in terms of box office success, but the Percy Jackson books and movies have a loyal following.  The name remains stuck in fashion limbo.  If Henry and Bentley are hot, why not Percy?  But somehow he still sounds less action hero than the demigod character should imply.

Raleigh – Pacific Rim is another alien invasion flick.  It doesn’t seem promising from a cinematic point-of-view, but it could be nominated for best character names.  Idris Elba plays Stacker Pentecost – really! – and Tendo, Herc, and Raleigh are among the other characters.  Raleigh is a place name proving that -leigh is very wearable for boys, though the North Carolina capital is also on the upswing for girls.

Ronin – Animated adventure flick Epic includes a character named Ronin.  If the tree name Rowan is gender neutral, Roman is an adjective, and Ronan is an Irish heritage pick, Ronin is something entirely different.  The word is a term for a samurai without a master – not necessarily a desirable situation in Japanese culture, but the kind of idea that Americans embrace.  It’s definitely not a given name in Japan, but in the US, he’s just inside the Top 1000.

Sawyer – He’s bounded up the charts for both genders, but here’s another notable use for a boy.  Jamie Foxx plays President Sawyer in White House Down.  The only trouble?  He’s not the action figure.  That would be Channing Tatum, as a cop called James Cale.

Sullivan – He’s a cheerful Irish surname.  Could his rise in popularity be thanks to a furry blue monster?  James P. Sullivan is back for a Monsters, Inc. prequel.  We know that the movie is likely to be a hit, but will Sully catch on for our sons?

Agnes, Edith & Margo – The three little girls from Despicable Me are back for the sequel.  Their clunky, retro names are just on the cusp of cool.

Annabeth – She’s Percy Jackson’s Hermione, the brave and daring daughter of Athena.  With Annabelle and Anneliese attracting attention, will this smoosh name catch on?  So far the answer is maybe.  While the novels and first film have definitely boosted Annabeth’s use, she’s a far cry from popular.

Clary – I mentioned The Mortal Instruments earlier.  Clary is short for Clarissa in the books.  Clare names are having a good run right now, and Clary feels like a potential surprise hit.  After all, Clary has surname style – she’s either a cousin to Cleary, or possibly an occupational surname for someone who sold herbs, or lived near a field where sage grew.  Clary is a common name for more than one variety of sage.  If Mortal Instruments is the new Twilight, is Clary the new Esme?

Claudia – Closed Circuit looks like a courtroom drama, or maybe more of a thriller.  Could a character named Claudia help reverse the name’s decline?  There’s another character called Piccola, but I’m not clear if that’s a first, last, or nick name.

Constance – I believe this is the name of one of Brad Pitt’s daughters in zombie apocalypse flick World War Z.  (Which I may or may not see, because I’m something of a ‘fraidy cat when it comes to zombie flicks.)  But Constance strikes me as the kind of name that should be buoyed by our affection for Caroline and Charlotte, Grace and Faith.  Ladylike and meaningful at once, Constance could shorten to Tansy if you’re worried about the dated nickname Connie.

Daisy – We’ve been talking about names from The Great Gatsby for weeks, but I can’t resist one more mention of the innocent, botanical Daisy.

Henley – The coming attractions for Now You See Me make it look like The Italian Job meets Ocean’s Eleven meets Robin Hood.   Isla Fischer plays a character named Henley.  H has been a hot letter in recent years.  Think of Harper, Harlow, Hailey, Hadley.  Why not Henley?

Letty – She’s a sweetly vintage nickname from the turbo charged Fast and the Furious 6, the latest installment in the franchise.

Lois – The Superman story gets yet another big screen reboot.  This time Amy Adams plays Lois Lane.  Can the winning actress reboot the name of the fearless reporter?

Are there any summer movie names that you’d be inspired to use?  Do you think any of these are likely to catch on?