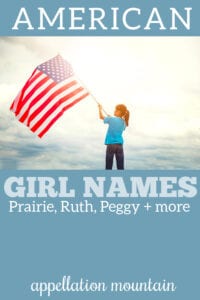 Many American girl names are borrowed from First Ladies, as well as other women associated with the presidency. The original inspiration for this list? Letitia, as in the wife of tenth US president John Tyler.

In recent years, the concept of patriotic baby names can feel a little politically charged. But the women on this list represent every many different aspects of the American experience. I’ve included Civil Rights activists and social reformers, along with First Ladies and a Catholic saint or two.

Most of these names lean traditional, even expected. No one assumes your Eleanor is named for Roosevelt, or your Amelia for Earhart – though they’re great namesakes. But the word names and some of the less common choices, like Zora or Dolley, invite more speculation.

Read on for some of the best American girl names – and please share any that I’ve missed in the comments!

Abigail Adams might be one of the better known First Ladies, and her name has been a Top Ten staple in recent years.

Theodore Roosevelt’s first wife and eldest child shared the storybook name Alice. Daughter Alice became a well-known socialite and fashion trendsetter. For her debut, she wore a dress in a shade that quickly became known as “Alice blue.”

No surprise traditional Caroline features in American history. Caroline Kennedy comes to mind initially, but it was also the given name of First Lady Caroline Harrison.

Often a nickname for Dorothy, but it’s the given name of First Lady Dolley Madison. She’s famous for defining the role of First Lady as official hostess, but she’s also remembered for saving the portrait of George Washington during a fire.

The wife of 27th US President Theodore Roosevelt, as well as Mrs. Woodrow Wilson, Edith feels vintage and accomplished. Nickname Edie is a bonus.

So many famous women have answered to the name Elizabeth, including First Ladies. (Bess Truman and Betty Ford were both born Elizabeth.) And Saint Elizabeth Seton founded schools for children of the poor, creating a religious order that established schools, orphanages, and hospitals as the country grew. And Elizabeth Blackwell would become the first American woman to earn a medical degree.

Mamie Geneva Doud earns my vote for the most interesting given name of any First Lady. It might be short for Mary or Margaret, but Mamie also ranked in the US Top 100 as an independent name from the late nineteenth century into the 1910s.

Martha Washington earns this name a place on the list. It fits with homespun names like Ada and Hannah, feminine, but with a lot of strength, too.

Baby Ruth wasn’t born in the White House, but the daughter of Grover Cleveland, 24th president of the United States, became a popular figure as a child. It’s often said that the Baby Ruth candy bar is named for her … but the timing suggests that baseball’s Babe Ruth was the more likely inspiration.

Hamilton re-imagined much of American history, while sticking to the substance of the story. Composer Lin-Manuel Miranda transformed the historical Schuyler sisters into a Destiny’s Child-esque trio. Eldest sister Angelica mixed with many a Revolutionary in real life.

And then there’s the middle Schuyler sister, Eliza, the future Mrs. Alexander Hamilton. This is one of those vintage girl names that feels so very at home in the twenty-first century.

Youngest sister Peggy was born Margarita, but known mostly by this sparky nickname.

Theodosia Burr, daughter of Hamilton’s bitter rival Aaron Burr, lived a life almost bigger than any Broadway musical. “Dear Theodosia” demonstrates Aaron’s devoted care for his daughter. She was well-educated, married well, and then lost her life in a mysterious shipwreck.

So many famous Annes come to mind, but poet Anne Bradstreet, an early settler in Massachusetts, might be the first of the many prominent American women by the name.

This list would feel incomplete without seamstress Betsy Ross.

Notable women from the suffrage movement could dominate this list … but there’s another post for that! Cady comes from Elizabeth Cady Stanton, a choice that more clearly honors the activist than her traditional first.

A hospital nurse during the Civil War, Clara Barton would go on to found the American Red Cross.

During the Civil War, Dorothea Dix served as Superintendent of Army Nurses. Following the war, she advocated for mental health reform.

Journalist and activist Dorothy Day co-founded the Catholic Worker Movement. She was still being arrested for civil disobedience at 75.

Frances Perkins served as US Labor Secretary in the 1930s, the first woman appointed to the US Cabinet.

So many artists could fit on this list, but Georgia O’Keefe stands out. She painted New York City skyscrapers, the landscapes of New Mexico, and all of those vibrant flowers. Her work helped usher in American modernism.

Harriet Beecher Stowe’s Uncle Tom’s Cabin became a blockbuster. In the nineteenth century, only the Bible sold more copies. It changed attitudes towards slavery. While it relied on stereotypes problematic by twenty-first century standards, it fueled the abolition movement, and helped lay the groundwork for the Civil War.

Pioneering journalist Ida B. Wells puts her name on the list.

Nineteenth century reformer Jane Addams is best remembered for establishing Chicago’s Hull House, a mix of educational and social programs. But she also advocated for the role of women in public life, and became the first American woman to receive a Nobel Prize.

Some of the most fascinating women of the American Revolution served as spies. Lydia Darragh warned General George Washington of an impending attack by the British, allowing him to prepare his troops.

Texas-born Mariette Rheiner ran for judge in her home state – even though women didn’t have the right to vote in 1893. She was defeated by John Nance Garner, but later the pair married. She became Second Lady during Garner’s term as Vice President in the 1930s.

Molly Pitcher exists partly in legend. It’s said that she was a real woman who fought in the American Revolution – and there’s more than one real-life example to support the story.

A Pulitzer and Nobel-Prize winning author, Pearl S. Buck grew up in China, the child of missionaries. She advocated for the rights of women and minorities, as well as a range of causes. Her novel, The Good Earth, explored the lives of Chinese peasants, a world unknown to most Americans at the time.

Born in Senegal, and sold into slavery as a child, Phillis Wheatley would defy all odds to become a published poet.

Prudence and her husband were active in the American Revolution, but Prudence did something extraordinary. As their husbands went off to war, she founded a women’s militia, eventually defending a bridge and capturing Tory soldiers. All while raising eleven children.

While most of the names on this list date back centuries, the women of the Civil Rights movement are more recent – and every as inspiring for American girl names. Ruby comes from Ruby Bridges, the courageous six year old child who became the first to enroll in a forcibly desegregated New Orleans school.

Sandra Day O’Connor became the first woman to serve on the US Supreme Court.

One of many talents associated with the Harlem Renaissance in the early twentieth century, Zora Neale Hurston is best remembered for her novel, Their Eyes Were Watching God.

If Ava and Avery are names, Brave and Bravery feel like options, too – though perhaps better in the middle spot.

The flag might inspired children named Scarlett, too. But of the colors red, white, and blue, only Blue feels like a given name.

A religious name, a bold one, and, if you can hum along to Battle Hymn of the Republic, possibly a patriotic one, too. And thanks to SilentOne for mentioning “Old Glory,” another mark in favor of this name’s red, white, and blue status.

July feels summery and warm, but it also celebrates the Fourth of July.

As in Bell, and Statue of.

It’s not a virtue or an ideal, but Prairie does feel like a more daring alternative to Meadow. The lyrics of God Bless America specifically mention the prairies. There’s Laura Ingalls Wilder’s Little House on the Prairie, too, forever part of our idea of nineteenth century pioneers.

Did I forget any of your favorite American girl names? 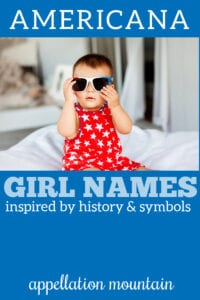 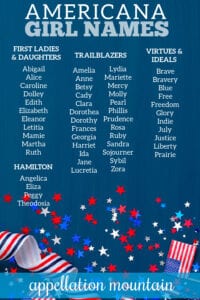