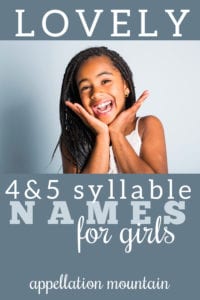 Not so long ago, every Elizabeth was a Betty or a Lizzie or a Bess. But today? There’s a good chance Elizabeth uses her name in full. The same is true for Eleanor and Valentina and Josephine. Rising choices like Ellianna and Ariella seem designed to layer on the syllables.

Which long girl names are the longest? Which seem most wearable? This list rounds up dozens and dozens of the very best.

Some longer girl names might be three or four syllables, depending on pronunciation. Think of names like Cordelia. And a few might stretch from four to five, or more.

Read on for a long list of long names for girls. Please share your favorites in the comments!

We love sweet Adeline – and Adelyn, Adalynn, and Adalyn, too. No surprise, then, that Adelina also ranks in the current Top 1000.

Rare as a given name, Alabama has been worn by two memorable fictional characters: the main character from Zelda Fitzgerald’s only novel, and the heroine of cult classic True Romance.

Alethea comes from a Greek word meaning truth, but it has only been in use as a given name for a few hundred years. It enjoyed just one tiny moment of popularity, back in the 1970s. Hit television series Kung Fu included a character by the name, played a young Jodi Foster. If Sophia and Athena are stylish, why not Alethea?

Alexandra feels timeless and traditional, though it was especially big in the 1980s. Romance language versions Alessandra and Alejandra make for slightly different versions.

A Spanish name borrowed from one of the Virgin Mary’s titles, Altagracia means “high grace.”

Count Amaryllis among the most wearable of rare flower names, even at four syllables.

Amabella came first, derived from the Late Latin Amabilis – lovable. Annabella and Arabella both developed from the original.

Strictly speaking, the German Anneliese is pronounced just like Annalisa. But Annalisa might make more sense in the English-speaking world.

Many pronounce Antonia with just three syllables, but it is possible to extend it to four – and Antonina and Antonella definitely tip the syllable scale at four each.

Araceli means “altar of the sky,” as in Maria de Araceli, the patron saint of Lucena, Spain. It’s been used in the US since the 1960s.

Araminta feels like a Victorian concoction, but the name was coined in the late 1600s for a William Congreve play. It’s been used sparingly ever since, including a minor figure in the Harry Potter series.

Wildly popular in both spellings, this name was boosted by pop sensation Ariana Grande. The original is also a long and lovely choice for a daughter: Ariadne, who helped Theseus defeat the Minotaur in Greek myth.

Shakespeare gave the name Ariel to a sprite in The Tempest. Disney chose it for The Little Mermaid in 1989. But it’s not aquatic. Instead, Ariel is a Hebrew name meaning “lion of God,” and it’s typically masculine. Ariella makes it frilly and feminine.

Anastasia might belong on the five-syllable names list. Except Americans tend to say stay szha, not stay SEE ah. The youngest of the doomed Romanov princesses, rumors that Anastasia survived her family’s grim fate – and an animated musical version of the story – have kept this name on parents’ radar.

A princess rescued by Perseus in Greek myth, and a constellation in the night sky, Andromeda is rare, but accessible.

Angelina and Angelisa turn traditional Angela up to eleven.

A Hindu goddess name, and a towering mountain in the Himalayas.

While some of these names have independent roots, they all feel like inventive spins on Ava, Eva, or Eva.

Smoosh names have a long history of use, and with Isabella in favor, other ends-in-bella names feel like possibilities.

Aviana makes the list thanks to Amy Adams’ daughter Aviana, born in 2010.

Both names are feminine forms of Benedict, as in the former pope and the Oscar-nominated actor.

Move over, Penelope! There are plenty of Greek names for girls that share the same qualities: easy nicknames, the fun ‘e’ ending, and a great story. Calliope was the Greek goddess of epic poetry.

Charlotte and Caroline both rank in the US Top 100, but Carolina remains less common. It feels Southern, thanks to the US states, as well as high fashion, thanks to Venezuelan-born fashion designer Carolina Herrera.

Regal, saintly Katherine has an almost infinite number of variants, many of which boast four syllables. The Spanish Catalina also brings to mind the California island.

A rarity used by Faulkner, it comes from the ancient Greek city state.

Hercules had a wife named Deianira. Dayanara might be a modernized spelling, or it could be a creative coinage. And then there’s Game of Thrones‘ Daenerys, invented by George RR Martin, but sharing many similar sounds.

Othello’s doomed love Desdemona was given her name by Italian poet Cinzio. His 1565 work Un Capitano Moro is believed to be the basis for Shakespeare’s Othello. It fits with long names for girls, but the meaning – ill-fated – might be off-putting.

Domenica and Dominica serve as feminine forms of the Top 100 Dominic.

As in Versace, and Donna Moss, The West Wing character. It’s derived from the Latin donatus – given. Donatello is more familiar, thanks to the Renaissance sculptor and his namesake Ninja Turtle.

Don Quixote’s beloved, and the name of a Toad the Wet Sprocket album from 1994. Shortens the oh-so-sweet Dulcie. Other elaborations, like Dulcibella, have history, too.

Elizabeth is a venerable classic, and Elisabeth is the just slightly different form. Both feel classic and enduring, and also belong with longer names for girls.

This name made headlines when British prime minister David Cameron and wife Samantha welcomed daughter Florence Rose Endellion. It’s the name of a Cornish saint, honoring the place of the youngest Cameron’s birth.

A literary, romantic Eve- name with a spiritual meaning, Evangeline has been quite popular in recent years.

All feminine forms of Frederick, and every bit as wearable as Alexandra. Plus, Freddie is sweet and sparky on a girl, a sister for Sadie. If Francesca and Frankie seem stylish, Frederica and Freddie could be, too.

The elaborate Spanish form of Florence.

A name from Greek myth, Galatea was later given to Pygmalion’s living statue.

It’s an out-of-this-world rarity, a feminine form of Galileo, meaning “from Galilee.”

In Spanish, Grace becomes Gracia. And Gracia can be elaborated to Graciela. One-part virtue name, one-part long names for girls.

The French Genevieve is having a good run, so why not the Spanish form?

An Italian feminine form of John, sometimes spelled Giavanna in the US.

Hattie and Hettie fit right in with Sadie, but they started out as short forms of Harriet and Henrietta – feminine forms of Henry.

Wildly popular, yes. But a lovely name with a rich history, too.

Several saints have answered to forms of this name, but it’s most famous thanks to dancer Isadora Duncan.

Julianna has the feel of a classic, and Juliet is forever tied to Shakespeare’s tale of young love. But Giulietta – an Italian diminutive form of Giulia – and Julietta – are rarities in English.

The Arabic Khadija became the four-syllable Kadiatou in western Africa.

Choose your number of Ls and Ns, and this long name for Lily is one that will feel quite current today.

This Hawaiian name for heavenly mists is pronounced with four syllables, and might be among the more accessible of elaborate Hawaiian options.

Another Lily name, this one borrowed from a Spanish saint.

Lucy and Lucia are short and popular, but Luciana belongs with lovely, longer names for girls.

Madeline – pick your spelling – maxes out at three syllables. But the elaborate Italian Maddalena turns it up to four.

Mary Anne is simple and sweet, while the elaborate Mariana is a more romantic possibility. The Mariana Trench, located in the Pacific, is the deepest part of the worlds’ oceans.

Nicole is a modern classic, slightly French and undeniably familiar. These forms aren’t rarities, but if you’re after an elaborate Nic- name, they might work.

A substitute for Olivia, Octavia refers to the number eight. Perfect for your eighth daughter – or, more practically, a daughter born in August.

One of the long names for girls that proves four syllables isn’t too many. Made famous by the Australian singer who starred in Grease, it now stands at the very top of the popularity charts.

Another O name that shares sounds with powerhouse Olivia.

This name was obscure back when Christina Ricci starred in the fairytale movie by the name. Today, Penelope is a favorite chosen by everyone from Tina Fey to Kourtney Kardashian.

A lovely alternative to Penelope, rare but not unfamiliar.

Petra is a feminine form of Peter. Petronella is an even longer form. The -nilla spelling was worn by an early saint, but the -nella ending lends itself to nickname Nell.

It could mean loved, or it might mean “friend of strength.” Either way, Philomena has a great meaning. The early saint’s name is obscure in the US today, but if girls can be Francesca, why not Philomena?

We all know the name Raphael, thanks to the archangel. The feminine forms are rare in English, but fit with longer names for girls.

Jennifer Garner and Ben Affleck put this unusual name on parents’ radar when they chose it for their second daughter in 2009.

Sophronius means sensible. It was the name of a seventh century saint. It’s rare, but brings to mind chart-topper Sophia.

In Latin, Stella Maris means “Star of the Sea.” That sounds like a nature name, but it comes from a title given to Mary. That makes it spiritual, and unexpected, too.

Theodora means gift of God. Like Theodore, there’s plenty of history attached to this name.

Hamilton’s “Dear Theodosia” could lead to a few more girls given the name.

A Spanish place name, Valenica is associated with oranges. It’s also the name of a Decembrists’ single.

A fast-rising favorite, Valentina brings valentines to mind. But it comes from the Latin valens – strong.

Violet ranks in the Top 100. Violetta sounds even more flowery.

Sure, there’s Willa and Willow. But if you like longer names for girls, Wilhelmina and Williamina work.

Tina Fey named her firstborn daughter Alice Zenobia. It’s literary, too. Nathaniel Hawthorne chose it for a character in The Blithedale Romance.

We love Alexandra. Alexandria is an ancient city, but also reasonably familiar as a girl’s name. Alexandrina is rare, but there’s at least one notable bearer – it’s the given name of Queen Victoria herself.

The Borrowers introduced us to Arrietty, though the name’s origins are obscure. Arietta might be a spin on Harriet.

Candelaria comes from the feast of Candelmas. It commemorates the presentation of the infant Jesus in the temple.

Cassiopeia is a constellation in the night sky, as well as a long and elaborate name for a daughter.

Emilia is a fast-rising favorite. Emiliana extends the sound.

Isabelline is a pale yellow-grey color. Isabellina ups the syllable count to five.

Leocadia fits in with all those Leo names for boys. It comes from the name of a fourth-century Spanish martyr.

A five-syllable place name possibility, Louisiana seems as wearable as Georgia or Savannah.

Max names to the max!

Rose and Mary form Rosemary, with just three syllables. Rosamaria takes it up to five.

A big, bold word name, Serendipity is long on sound and syllables.

How long is the longest name on your girls’ list?