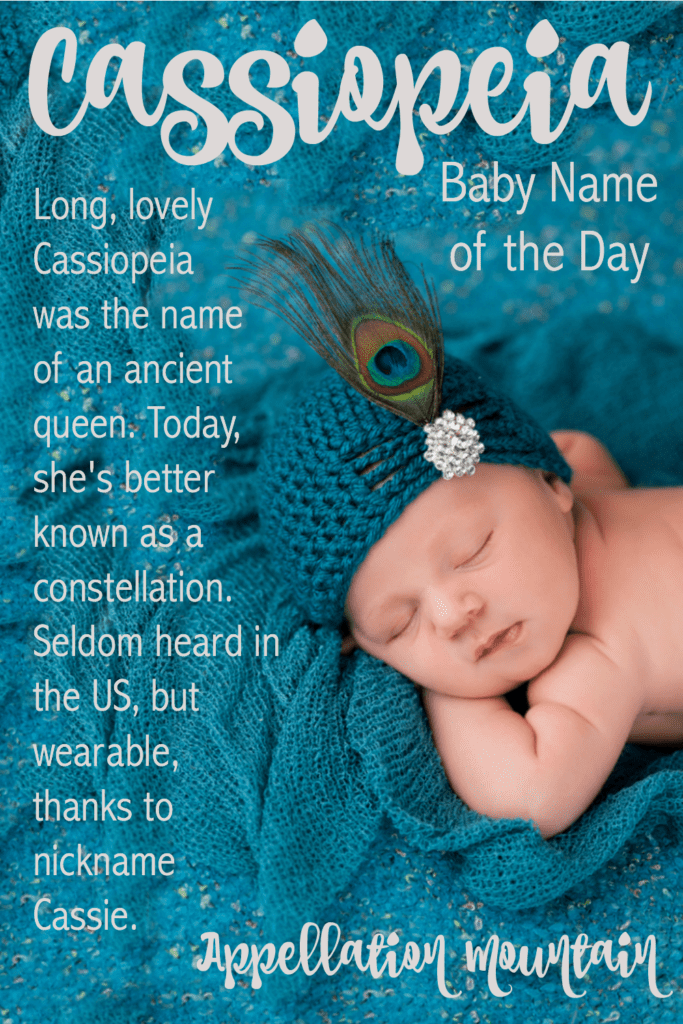 Cassiopeia is a mythogloical moniker at home in the night sky, but rarely heard as a given name.

Thanks to Sarah C for suggesting our Baby Name of the Day.

Back in the day, Cassiopeia reigned as queen. She and King Cepheus were the parents of the lovely Andromeda. Sounds like an ancient fairytale, right?

The queen was gorgeous and vain, and thought her daughter was every bit as gorgeous. She bragged – a lot – until one of her claims reached the ears of Poseidon. The queen, you see, declared that Andromeda was far more beautiful than the sea nymphs, and the sea nymphs? They were not pleased.

Poseidon set a sea monster on their kingdom, telling Cepheus that only the sacrifice of his daughter could save his realm.

That’s how Andromeda ended up chained to a rock on the coast, and if you’ve seen Clash of the Titans, you know the rest.

Poseidon was ticked that the hero Perseus managed to spirit away Andromeda, and so Cassiopeia was turned into a constellation and tucked away in the night sky.

There’s more than one woman by the name in Greek myth, but this story is the most famous by far.

Depending on the season, the constellation, and your spot on the Earth, Cassiopeia forms either an M or a W. The queen sits on her throne, perhaps chained there for eternity. Ptolemy listed the constellation way back in the second century, so it’s been around forever. The shape makes it easy to spot.

Parents love night sky names, from Luna to Stella, so this is a plus.

Sara Bareilles recorded a song about the constellation, and Rick Yancey’s The 5th Wave features a heroine named for the stars. Yancey’s Cassie is heroic, and might reform the name’s image with a younger generation.

Cassiopeia: By the Numbers

The original version of Clash of the Titans came out in 1981. Cassiopeia reached peak use in 1984. Credit goes to the movie, and to the popularity of Cassandra, too. But “peak” means a grand total of 15 girls – still very rare!

The 2010 movie remake could have given it a boost – but the queen’s boasting probably put some parents off.

Other Cass- names have fared well in recent decades, including:

Other Cass- rarities include Casilda, a medieval Spanish saint’s name.

Many parents adore long names for girls in 2016. Look at Top Ten favorites Olivia and Isabella. At five syllables, Cassiopeia tops them all.

Thanks to easy nickname option Cassie, this elaborate, dramatic name remains on the right side of wearable. If your heart is set on an extravagant rarity, Cassiopeia could be the name for you.

What do you think of Cassiopeia? Does the queen’s reputation bother you? Or is this name just plain too long?